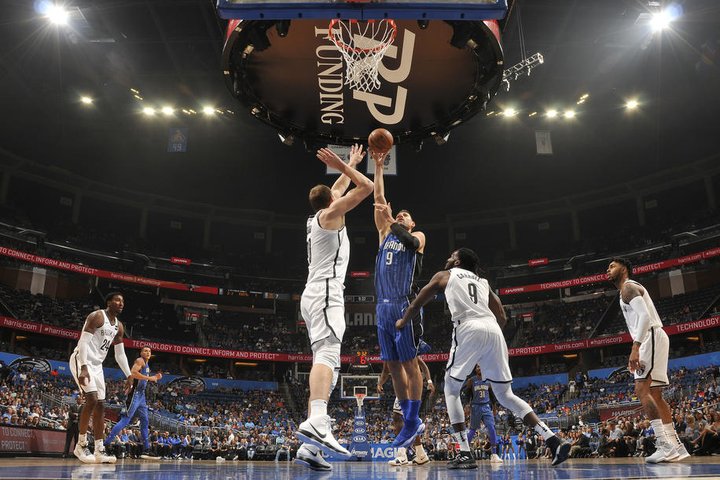 ORLANDO, FL - OCTOBER 24: Nikola Vucevic #9 of the Orlando Magic shoots the ball against the Brooklyn Nets on October 24, 2017 at Amway Center in Orlando, Florida. NOTE TO USER: User expressly acknowledges and agrees that, by downloading and or using this photograph, User is consenting to the terms and conditions of the Getty Images License Agreement. Mandatory Copyright Notice: Copyright 2017 NBAE (Photo by Fernando Medina/NBAE via Getty Images)
Home
Brooklyn Nets
Brooklyn Nets Game Threads
Sandy Mui

On Tuesday night, the Brooklyn Nets found themselves in a rematch with the Orlando Magic, just four days removed from the two teams’ first matchup of the season. However, while the Nets’ win streak of the season commenced in the Oct. 20 game against the Magic, it came to an end in a nail-biting thriller. Brooklyn came up just short, 125-121, of securing its third win of the season. With the loss, the Nets are back at the .500 mark, at an even 2-2, and return home to face LeBron James and the Cleveland Cavaliers on Wednesday night.

For much of the first game in the Nets’ back-to-back set, things were going right for the team. Unfortunately, the Nets could not hang on.

The Nets are fun!

As I tweeted out after the game, I couldn’t even count the number of times I saw the word “fun” describing the Nets on my timeline. This may be surprising for those who do not follow the Nets closely, as well as my dad, who was so shocked the Nets beat the Hawks on Sunday.

All four of Brooklyn’s games this season have been within three points at halftime, showing the competitive nature (and also perhaps the inability to fully contain its opponent) of this young team. Of course, this game was a particularly exciting one because it went down to the wire, but even more reason to tune in then, eh? The Nets’ young guns, Caris LeVert, D’Angelo Russell and Rondae Hollis-Jefferson, overall have been impressive thus far, so there is only a lot more for Nets fans to look forward to this season.

D’Angelo Russell gets hot quickly, but goes cold for rest of game

It may be hard to paint the picture here perfectly, since “ice” is a word that is often associated with D’Angelo Russell. However, “getting hot” actually means shooting well, and “going cold” refers to missing shot after shot.

Russell looked like he was shooting at target practice in the first quarter, hitting all four of his three-point attempts. To put this in perspective, the amount of threes (4) he knocked down in the first 12 minutes were as many as the total any Net has made in the first three games of the season. Unfortunately, he went on to not make another shot from downtown after the first quarter.

Where was Allen Crabbe?

For the most part, Allen Crabbe has shown why he’s worth every pretty penny on the Nets. The 25-year-old wing averaged 13.7 points and 4.3 rebounds in his first three games with the team, while also shooting at a 50 percent clip from downtown. He’s certainly not “Mr. Average,” his nickname in the second clue during YES Network’s “Who Am I?” segment. (Crabbe was considered “Mr. Average” in a side-by-side comparison with Tony Snell, who is deemed at league average.)

Tuesday night was a huge outlier for Crabbe, as the 41 percent career three-point shooter was off the mark on nearly all of his treys. He knocked down only one of his seven attempts and finished with just six points on 2-of-11 shooting from the field overall.

It was a tight game and the blame cannot be placed on a single player, but it is crazy to think just two more converted triples from Crabbe could have resulted in a Nets win. (Considering he is usually money from long range.) One off game only four games into the season should not be too troubling, though.

The Nets’ final possession was difficult to watch and stomach, as the team was down 125-121 but missed three shots in the final 15 seconds of action. (Two of them were three-pointers.)

Brooklyn had eaten up its final timeout already, in part due to a timeout called by Rondae Hollis-Jefferson with 4:19 remaining, which left the Nets with just one timeout. The Nets actually used four timeouts in the fourth, contrasting only using one in the third, since for the most part, they held the momentum in their play right out of halftime. This speaks volumes to how much the game was slipping away for them from the very beginning of the fourth. Remember: The Nets led by nine, 96-87, heading into the final period.

With the game getting tight (the Nets holding a slight 101-97 edge) a little more than three minutes into the fourth, that’s when the team used its first timeout of the fourth (No. 2 of the second half). Two more came in the next five minutes, with the Magic inching ever-closer; the Nets lead was down to 110-109 with 4:19 to go. We have a 22-14 Magic run, led by mostly Jonathon Simmons and everyone not named Aaron Gordon (ironically considering his career performance through predominantly the first three quarters), to thank for that.

Brooklyn is usually known for its third quarter meltdowns, but this time, they were fourth quarter woes.

With so many injuries hitting the league and Jeremy Lin out for the season, it is easy to panic when any Net goes down. Hollis-Jefferson had that scary fall a couple of games back, and there were a couple of more injury scares in this matchup. LeVert was spotted slightly limping in the second quarter, but he ended up playing the rest of the game. Russell also had a frightening fall of his own with 6:34 remaining, after converting on a tough layup. Luckily, both players were fine, but Christian Milcos’ The Office gif was right on cue and quite accurate when Russell went down.