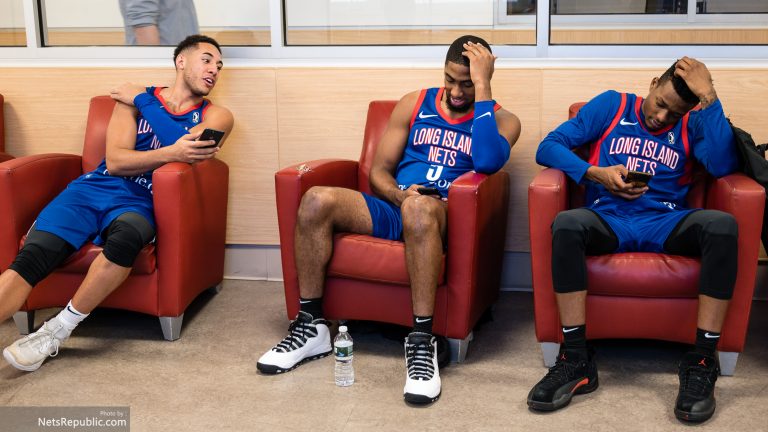 The NBA G League season has started, which also means that the Brooklyn Nets’s G League affiliate — the Long Island Nets — have also started their season.

Here at Nets Republic, we plan to provide you with updates all season on how the team down in (or on? Not from New York, so not sure what the terminology here is) Long Island is doing.

Let’s look at how Long Island’s season has gone so far.

Through four games, the Nets are 1-3, with their lone win coming against the Fort Wayne Mad Ants in the season opener. (Hey, a Nets team beat an Indiana team!)

Here are some numbers from each game.

Long Island opened the year with a win over Fort Wayne in a game that was exciting enough that I snuck it on on my computer while I was supposed to be hanging out with a friend and watching college football. But how could I choose football over the opening game of the G League season and the first chance to see what this team could do? (And especially to see what Jaylen Hands could do?)

Hands delivered well, putting up 15 points and seven assists. All of Long Island’s starters were in double figures, led by Devin Cannady’s 23 points. John Egbunu had 12 points and 12 boards.

On the other end, the Nets survived three Fort Wayne players scoring in the 20s, including a 26-point, 10-assist game from Naz Mitrou-Long. I really, really like Mitrou-Long, though I know Brooklyn fans probably don’t like him after he had 12 points against them this Monday night. It’s good to see him getting a chance with the Pacers, but maybe not like this.

The Nets got a team-high 27 points from Deng Adel and a 5-for–11 night from three for C.J. Williams, but only John Egbunu finished with a positive plus/minus.

Well, what happened was that the Delaware Blue Coats have one of the best rosters in the G League, even if their 2-2 record doesn’t show it.

Jonah Bolden was getting playoff minutes last year for the Sixers, but he’s spent all year with the Blue Coats. He had 34 points and nine rebounds in this one, while Haywood Highsmith — who also spent a little time in the NBA last year — added 26 points and Philly draft pick Marial Shayok had 29 points. That’s a very good three-player grouping for the G League.

C.J. Massinburg was 10-for-14 from the floor for Long Island in 21 minutes off the bench. He finished with 28 points, while Jaylen Hands had 21. But defense — or, rather, lack of defense — was the name of the game in this one, which feels appropriate when you think about the big Nets club and what issues have plagued them this year. Synergy, am I right???

If I were predicting a game that the Long Island Nets would win of these, it would have been this one.

The Nets started Rodions Kurucs, Timothe Luwawu-Cabarrot, and Henry Ellenson, but those players combined to shooting 3-for-17 from long range. Kurucs was a -26 in the game. Deng Adel didn’t make a shot. Jaylen Hands was 2-for-9. The offense just sputtered out in this one.

You can blame the fact that these players weren’t used to playing together, or blame the Bulls having PJ Dozier and Daniel Gafford, but it’s really hard to look past just how bad Long Island’s shooting was. This is one of those that you have to win.