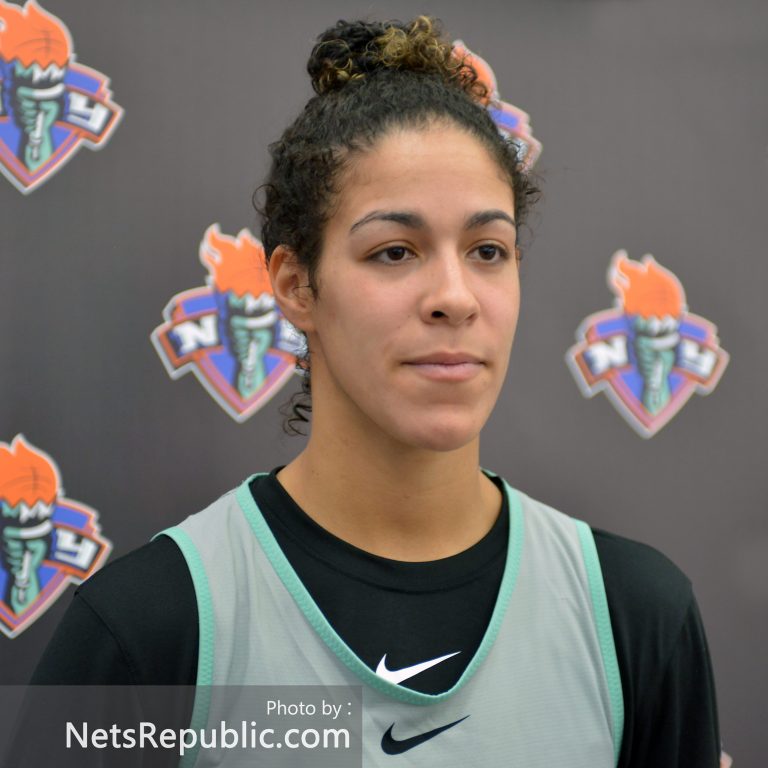 Headed into the season, production for the New York Liberty  from anyone not-named “Tina Charles” was a relative unknown. Asia Durr, however talented, was entering her rookie season, plus an inordinate amount of players were bound to EuroBasket obligations. When trying to identify a secondary scorer, Kia Nurse seemed like the best bet.

As a rookie, Nurse took opponents by surprise in the first seven games, ran into a wall in the middle 20 games as her minutes decreased, and rebounded with a strong final seven games, probably thanks to a starting position nod.

However inconsistent her rookie season was, Kia Nurse has become that much-needed secondary-star this season. Over the last five games, Nurse has led the W in scoring (20.4). Overall, she’s tied for first on the team in minutes (31.4), second in points (16.1), and fourth in assists (2.4). Additionally, she leads the team in free-throws and is the only available Liberty player (minus Amanda Zahui B) to make over 10 three-pointers (25/67).

“It’s just making sure you’re in good shape, making sure you’re taking care of your health when you need to,” Nurse told NetsRepublic in the locker-room after losing to the Chicago Sky. “I’ve played a lot of minutes overseas, which has helped me be prepared and ready to come in this season.”

The next step for Nurse to take on her stairway to stardom is consistency. The problem is her game, by nature, is live-and-die. An incredibly high free-throw rate undersells the variance of her game. She bounces cross-overs in the face of defenders, pinballs off defenders in transition, and hoists reckless floaters. Defensively, lightning-quick as she is, Nurse falls asleep off-ball far too often (which, to be fair, she admits is her largest weakness: “Still defense. It’s not where I want it to be. Continuing to read screens.”)

Whether her breakout campaign is sustainable, however, couldn’t matter less. The Liberty simply need her to stay aggressive. Other statistics paint Kia Nurse as their X-factor (hello, plus/minus in wins versus losses) but this particular contrast drives that point home: In the Liberty’s 0-4 start, Nurse attempted 10 or fewer shots. In next six games, they have gone 3-3, and Nurse has attempted 10 or more shots.

Now, with Zahui B joining Bria Hartley, Kiah Stokes, and Marine Johannes overseas at EuroBasket, she has to muster up more aggressiveness.

“It’s going to be a matter of picking up every little thing Zahui does. Every person is going to have to step up in their own way,” Nurse told NetsRepublic, a towel draped over her shoulders. “Obviously, her rebounding ability, her screening ability, her ability to shoot the ball is going to be something we miss. For me, it’s just going to be still coming in, going to work and trying to get better.”

With Zahui B — a versatile ball-screener and staunch rim-protector — out of the picture, Nurse will have to become a better finisher inside. Easier said than done; Zahui B, who was shooting 40% from deep on 3.9 attempts, stretched the floor. As inconsistent as she was, a willingness to step outside while Charles inflicted damage on the block provided Nurse driving space.

Where Zahui B would roam the arc, Gray parks herself in the dunker’s spot. Sure, Zahui B, did so occasionally, too, but that was borne out of necessity rather than anything else — she was mostly left open on the perimeter. However, she was starting to gain respect due to a hot shooting streak. She pick-and-popped often, smacking shots even as defenders closed-out on her. She wasn’t the ideal complement to Charles, but she sufficed.

Gray simply lacks the same three-point credentials. Against the Lynx, defenses switched screens and even double-teamed Nurse. This leaves Nurse, who often operates with the ball in her palms, with nowhere to go.

This season, Nurse has taken such a profound step as a primary initiator that sometimes a lack of space isn’t so damaging:

Separating the Gray-Charles frontcourt and having a shooter, such as Rebecca Allen — who is currently sidelined with a right-hand injury — slide up a spot or two isn’t the worst idea. Sure, Allen is quite undersized (6’2’’) and considered a guard/small forward on paper, but positionless basketball is the direction the W is trending. Allen has long arms and the makings of a respectable three-point shot (6/16 this season).

Nurse has the vision to scope out shooters provided the slightest of airspace:

Nurse is talented in her own right. Along with the likes of Diamond DeShields and DeWanna Bonner, among others, Nurse is a legitimate candidate for the most improved player. Unlike Bonner and Deshields, she hasn’t seen such a rise in usage where improvement should be expected.

That quick side-by-side comparison is to say this: she shouldn’t alter her identity. Her thirst for aggression quenches precisely what the Liberty need: a secondary star. If anything, she has proven to be that (and potentially more as her career progresses).

Even if Nurse outplays any expectation, replacing Zahui won’t be easy by any means. Han Xu and Nayo Raincock-Ekunwe have to provide (at least) salvageable minutes at the center position, yet neither are rotation-worthy. They won’t replace Zahui’s versatility as a ball-screening threat nor staunch rim-protection. Similarly, Asia Durr is what Nurse was last season: a rookie, talented nonetheless, with her flaws as an initiator, primarily errant shot selection. All things considered, Kia Nurse is the X-factor. She has to be. If not, another lost season could be upon the New York Liberty.