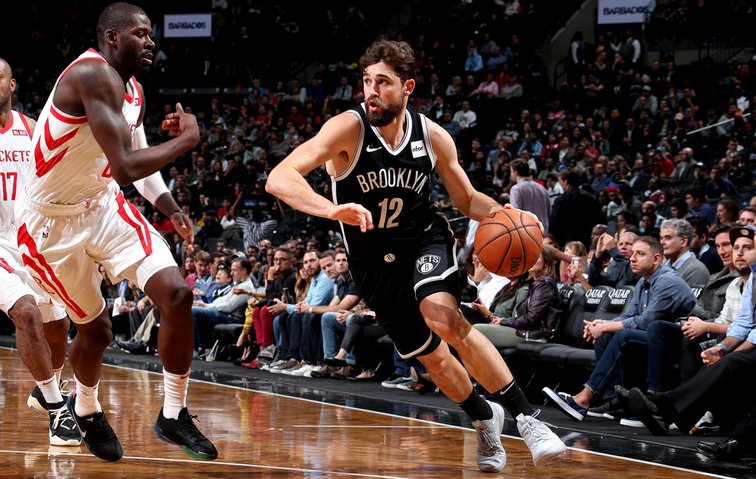 Joe Harris Is More Than A Shooter

Since his days with the Virginia Cavaliers, Joe Harris has been lauded for his lights-out shooting. Through his collegiate years, he posted a three-point percentage of 40.7, the third-highest in school history. His NBA numbers are similar, buoyed by impressive marks since joining the Brooklyn Nets. In three seasons, his shooting 41.5 percent from downtown on 4.5 nightly attempts. The 54.8 percent he’s posted to start this season is the most remarkable. He’s also shooting 59.5 percent on catch-and-shoot threes, the highest clip among all players who attempt two per game. But there’s more to Harris’ game than being a marksman.

Harris plays like a bearded Kyle Korver mixed with a pinch of Klay Thompson. His jumper is picturesque and comes complete with excellent elevation, allowing him to get clean looks even when guarded by longer players. He adds to that great feet, a substitute for his lacking athleticism. Few players glide around the court with such ease.

The most lethal part of Joe Harris’ offensive arsenal is his three-point shot. But he’s grown recently. He’s slashing more and becoming a reliable finisher.

During his first year with the Nets, Harris averaged 3.0 drives per game and shot just 37.0 percent on them, per Synergy. Year two featured a grand improvement — 62.7 percent shooting on 4.5 drives. This season, Harris is more aggressive than ever, averaging 5.3 drives a night. The accuracy has fallen to 52.4 percent, but he’s still one of the team’s most reliable finishers.

Harris is 12-for-20 on attempts inside the restricted area to begin the campaign. Last season, he was at 66.8 percent. His size plays a role, of course. At 6-foot-6 and 218 pounds, Harris is strong enough to absorb contact and tall enough not to get swallowed up by bigger defenders. However, physicals alone are nothing without actual skill.

When coming off a screen, Harris won’t give up if he can’t create separation. Defenders seldom go under a pick, instead opting to stick to him like a moth does a light. If the defense is solid and the jumper is taken away, he’ll attack the opening while shielding the ball from not only his man but the help defenders as well. Not all three-point specialists have that in their repertoire.

The next piece of the puzzle involves actually converting the layup. Harris doesn’t have other-worldly quickness or a 40-inch vertical, but he does have stellar concentration and outstanding body control. Those two attributes make him a better scorer, but they’ve also been instrumental in Harris’ development as a playmaker.

Joe Harris has never been the type to facilitate an offense. It’s a compromising position for him. He, however, has improved as a passer, particularly when it comes to finding cutters.

Through eight games, Harris is averaging a career-best 2.4 assists. His increased involvement in Brooklyn’s offense has created new avenues of impact. Harris’ newfound aggression has increased his point total, but he’s done a terrific job of finding cutters and driving and kicking to the open shooters.

Let’s head back to the NBA’s tracking data. It tells us that Harris is averaging a shade under one assist per game on drives. That number, by itself, is rather mediocre. But Harris’ volume, or lack thereof, raises some intrigue. He’s an improved passer who doesn’t do much of it. Heading into Friday’s game against the Houston Rockets, he’s passed out of his drives only nine times but managed to generate seven assists, a mark second to Caris LeVert’s nine. Harris’ assist percentage (16.7) is also close to the team high. Allen Crabbe (18.2) is the only one ahead of him among players with at least 50 minutes played.

Harris, unlike some of his teammates, isn’t a risk-taker. His dependability serves the team well. As a scorer, he gets to his spots using as little energy as possible. As a passer, he prioritizes simplicity, rarely threading the needle or attempting a pass that’ll get picked off. Of course, he’ll make bad decisions every so often. Half of his 16 turnovers are the result of bad passes. But one per game won’t cause the coaching staff to lose confidence in him.

Joe Harris is one of the best shooters in the NBA. But his game has developed into so much more than that. He’s not an elite slasher like some others at his position, but he’s reliable enough to force the defense to adjust their gameplan. His advancements as a playmaker, however, are, by far, the most impressive. Harris is just as confident in himself to deliver an on-target pass as he is when it comes to making shots. Credit must also be given to Kenny Atkinson and his staff, who have matched Harris’ confidence and encouraged him to play this way.