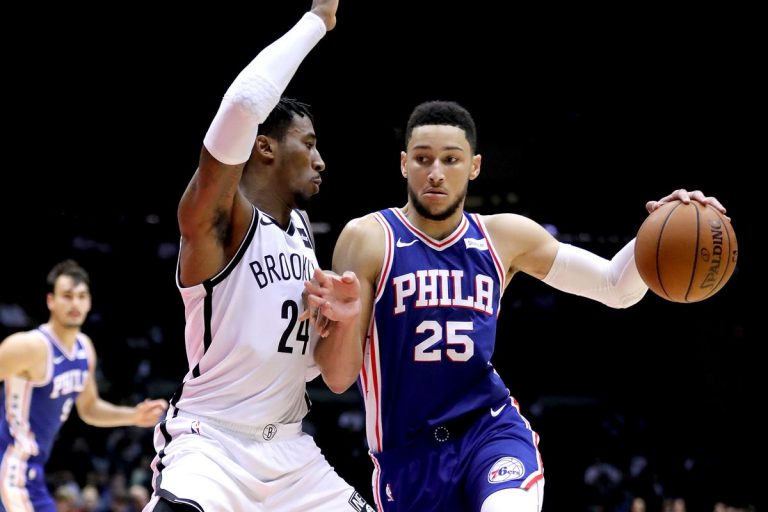 On Sunday, the Brooklyn Nets get the difficult task of slowing down the runaway train that is Joel Embiid. Three consecutive 30-point triple-doubles, including a 41/13 against the Clippers and a 39/17 again the Pistons yesterday, have the big man looking unstoppable.

What do the Nets need to do to upset Philadelphia on Sunday? Let’s talk about that.

What the 76ers bring to the table

It wasn’t long ago that Sixers fans were really worried about this season. A 2-3 record through five games with wins over Chicago and (barely over) Orlando and concerns about what head coach Brett Brown was doing with his lineups put the Sixers on edge. Starting Markelle Fultz over J.J. Redick? What? Why?

Well, there are still concerns about that, but Redick has settled into his sixth man role and is averaging more points than he ever has in his career on more field goal attempts. Even though it’s been accompanied by a drop in efficiency, Redick’s usage off the bench has been a revelation. He should be a 6MOY favorite so far.

Meanwhile, Markelle Fultz has flashed a lot of good things, including an ability to get to the basket effectively, but a Simmons/Fultz backcourt has enough shooting woes to introduce uncertainty into its long-term sustainability. The duo have a net rating of -8.0 when sharing the floor; Fultz has a positive net rating when sharing the floor with Embiid, Robert Covington, Landry Shamet, and J.J. Redick.

A major key to this game for the Nets? Hoping that Brett Brown doesn’t put out lineups that surround Simmons and/or Fultz with strong three-point shooters. If the floor is stretched, it makes those two players far more effective. Teams can’t stack the paint and dare them to shoot because there are other players who can shoot.

How to stop Joel Embiid?

You can’t, really, but one strategy could just be to focus on stopping everyone else. Look: I like Jarrett Allen. He’s a good center who averages 1.9 blocks per game. But here’s a comparison of his numbers, Embiid’s numbers, and the margin of victory in last year’s games:

I don’t think the focus needs to be how do we stop Joel Embiid defensively. You won’t. He’ll get his. Instead, the Nets need to find ways to get Jarrett Allen the ball close to the basket early to see if he can establish himself in this game, and if they don’t…well, focus on the rest of the things. Focus on outshooting the Sixers, who have the 10th-worst three-point shooting percentage in the league. As weird as it sounds, I don’t think Joel Embiid going off is what beats Brooklyn — what beats them is letting Landry Shamet and J.J. Redick fire away from deep while the Nets don’t get their own shooting going.

Who is the Net to watch in this one?

How does D’Angelo Russell bounce back from his recent struggles? He’s sat in crunch time in consecutive games and Kenny Atkinson mentioned that part of this was to avoid creating defensive mismatches. That is…a really telling thing for an NBA head coach to say, and it makes me think that Russell doesn’t have much of a chance of being in there in close, fourth quarter situations. But can he create enough offensively during the rest of the game to continue justifying his starting role? Or are we heading for a future where Spencer Dinwiddie moves into that spot? And what would that say about Russell’s future with this team?

Lots of questions. Not many answers. But Russell will need to start showing something more soon.