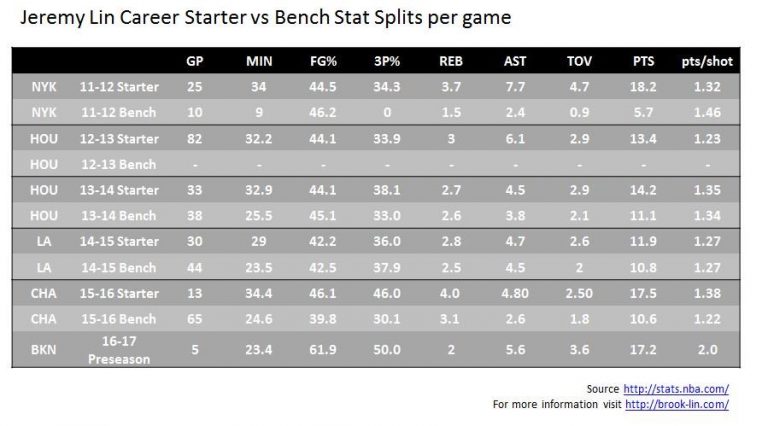 How Jeremy Lin Has Improved as a Shooter

Shooting mechanics are a tricky thing to evaluate. Most NBA players arrive in the league with a formed jump shot, and this can be an issue if the shots are simply not falling in. Reworking your shooting style is a process that involves ditching old habits, which can be tough to overcome. A shooting coach will help you with a jumper, but he can’t force you to execute it correctly every time.

Jeremy Lin’s mechanics are not perfect, and he’ll be the first to tell you that. When shooting a jumper, he keeps his fingers close to each other instead of placing them around the ball. As a result, his shooting motion suffers from decreased control and power. This also ties into him shooting more from his palm instead of using his fingers to guide the ball. Interestingly enough, Lin switches to the wide grip every time he attempts a floater. This discrepancy in his mechanics is a hint that points towards an imperfect shooting style.

Lin can’t be ignored as a three-point threat as it is, but adopting different mechanics would go a long way towards improving his shooting touch. Fortunately, Lin himself is more than aware of this flaw in his game. If you’ve read our exclusive interview with Doc Scheppler, you’ll know that Lin worked on his shooting all summer. They made some tweaks the prior summer as well, but Lin simply wasn’t comfortable with them. Old habits die hard, as they say, and Lin eventually revert back to his familiar shooting pattern.

This year should be a different story. By the end of the summer, every one of Lin’s shots looked the same, no matter where he shot from. These improvements should also help Lin with his confidence. If he misses a shot, he’ll still be positive that the next one is going in. Kenny Atkinson is familiar with the entire situation, and he’ll make sure Lin doesn’t give in to old temptations again.

And even if Lin hadn’t worked on his mechanics at all, his shooting percentages were bound to improve. Here is how he shot the ball last season with the Hornets: 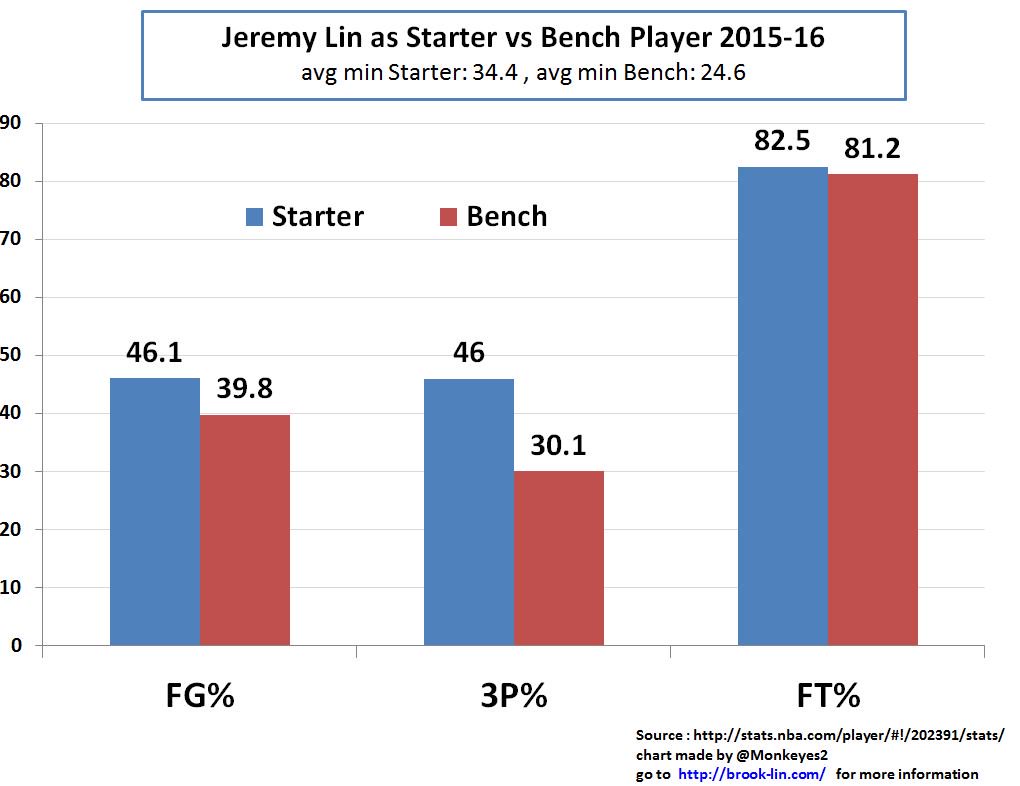 As you can see, he was vastly more effective as a starter. And if you think this might have been a one-off, let’s take a look at the bigger picture: In each one of his previous five seasons, Lin’s percentages jumped dramatically whenever he was in the starting lineup. These stats confirm what we already know – Lin is far more comfortable as a starter than as a bench player. The fact that he’ll be warmed up after the pregame workout instead of going cold on the bench won’t hurt either. Granted, it’s a small sample size, but for the first five preseason games, Lin averaged 61.9% in FG, 50% in 3P%, and 77.4% in FT%. All these facts make us believe that Lin will be putting up the best numbers of his career this season. The Nets will certainly be hoping he can deliver, especially since he’s basically the new face of the franchise. Indeed, the expectations will be higher than ever. Then again, that’s exactly what Lin signed for.

Thank you to @monkeyes2 for creating the graphs and charts.