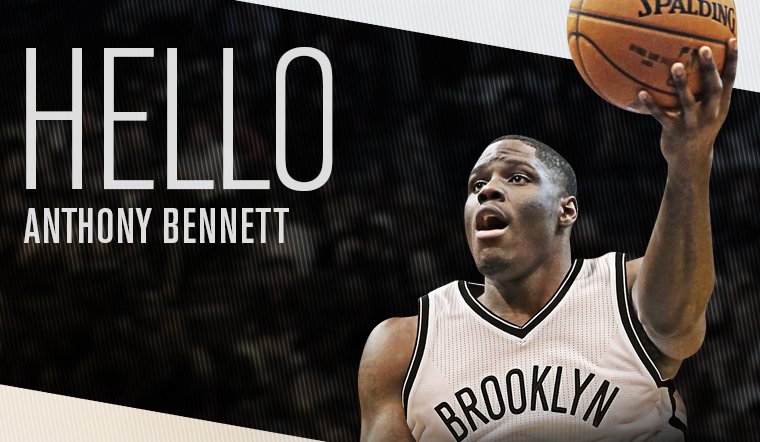 When Anthony Bennett was selected first overall in the 2013 draft by the Cleveland Cavaliers, people were shocked. The one-and-done Canadian prospect was the number one rated power forward in his high school class and had spent an impressive season at UNLV, but most felt it was a gigantic reach. After what some called the worst rookie season by a number one overall pick in history, he was packaged in a deal with Andrew Wiggins and sent to the Minnesota Timberwolves where he enjoyed his best season to date.

Unfortunately, the Wolves were so deep with young talent that Bennett became expendable and was bought out at the end of the season. He was picked up on a one year deal by the Toronto Raptors, who have had a front seat to his development since he was a child, but could not play himself into meaningful minutes on the playoff team and spent most of the season in the D-League or riding the bench.

Now, Bennett finds himself with a roster spot on the Brooklyn Nets and is, arguably, in the best position of his career. With little expectations, opportunity for growth in the roster, and a system that plays to his strengths; Anthony Bennett has a chance to realize his potential in Brooklyn. His biggest issue is that he hasn’t had a coach utilize him properly in the NBA. Before taking a look at how to use him, it is important to understand what he brings to the table.

Ideally, Bennett would play the five in a small ball lineup and serve as a pseudo-Draymond Green. He has a long way to go before he can be put in the same sentence has someone that defends and shoots as well as Green, but the building blocks are there.

So far, Bennett has really only been used properly by the Canadian National Team. In that system, Bennett thrives and looks like the player he could potentially be in the NBA. His performance in the 2015 Pan-American Games stand out the most. In five games played, Bennett averaged 15.6 points, 9.4 rebounds, and 1.2 assists while shooting 56 percent from the floor in 26 minutes of action. During the tournament, Bennett thrived while playing most of his minutes and the four and five.

He is at his best when he is running in transition or when he has space to hit open jumpers. He has a smooth release and long arms that help him get his shot up over length, but in the NBA he has struggled with consistency and shot selection. Canada’s wide open system and multiple shooters allow Bennett to find open looks in the half court and jaw dropping dunks in transition.

If preseason was any indication of what first year head coach Kenny Atkinson’s system will look like, then Bennett could be in for a banner year. If Atkinson’s motion offense has guys like Brook Lopez attempting three-pointers, then someone who has actually shown potential in that role should feel right at home. While you can’t put too much stock into preseason success or failure, Bennett already looks more at home than he ever did in Cleveland, Minnesota, or Toronto.

In five games played, Bennett averaged 7.8 points and 2.6 rebounds in 17.5 minutes of play while shooting a dismal 30 percent from the floor and 25 percent from three. Some of the shooting woes can be attributed to the circumstance surrounding his situation at the moment. Everyone on the team is learning a new system they aren’t totally comfortable with, they have ten new players on the roster, and the pressure of fighting for a roster spot all play a role but the root of the problem is his poor shot selection.

Bennett’s confidence has been all over the place in his career. In high school and college, he was the main guy. Coming to the NBA, he struggled adjusting to not being the primary focus. He no longer has the leeway to take poor shots, because he is only going to get six or seven in the game. Knowing when and where to score in the flow of an offense and within one’s own skill-set is something all young players struggle with. If Bennett wants to be successful, he is going to need to learn when to make the extra pass instead of shooting a contested three with 15 seconds in the shot clock.

Another area of his game that needs work is his back-to-basket post game. If he doesn’t get the look he wants on the low block, he has no moves to counter the defender. He has been so focused on his athleticism and shooting that he neglected to learn how to create space in the low post. While that won’t be too much of a focus in his game or role in this offense, he should have at least one go-to move with a few reliable counters that can help him score down low.

Bennett could be in for a great year with the Nets. If he becomes more consistent and reliable on offense and throws a lot of effort into the defensive side of the ball, he could be on his way to becoming a solid rotational player. Expect him to get the same amount of minutes he did in preseason, between 15-18. His numbers will improve as the season goes on. He will never meet the expectations of being a number one overall pick, but he can still become a very solid NBA player. If there is any team, any coach, any situation that is right for Bennett, it would be this team and this coach in this situation.