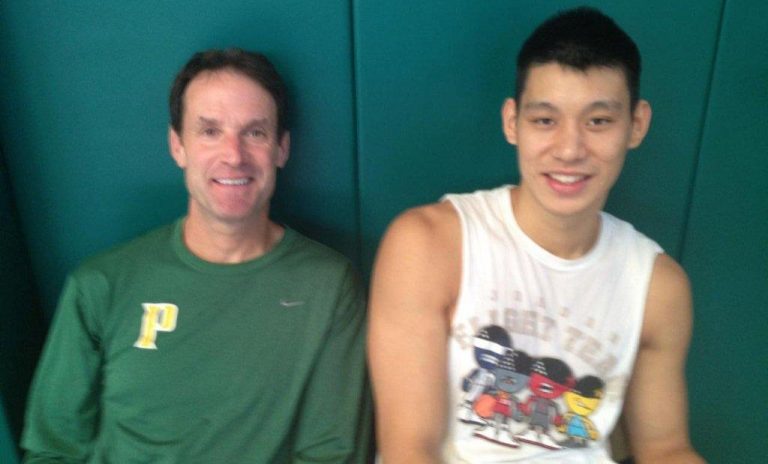 Doc Scheppler has been Jeremy Lin‘s shooting coach since the summer of 2011. He’s also the much-celebrated head coach of the girls’ high school basketball team for Pinewood, a tiny coed private school in Los Altos just five miles from Lin’s hometown of Palo Alto. It was Lin’s high school coach, Peter Diepenbrock, who was the one who suggested he hook up with Scheppler.

At Pinewood, Doc has coached his Division 5 team to six state championships and was named the 2014 Cal-Hi Sports State Coach of the Year. With the honor, something rare for small school coaches, Scheppler excised any doubts about his being among the best coaches in the history of California girls basketball.

I recently was fortunate to be able to do an extensive phone Q & A with Scheppler about the work he did with Lin this summer and his expectations for him with the Nets:

Doc Scheppler: I have seen him eat soup. Usually its Asian soup. It’s not at the top of his list of things he wants to eat. But sometimes when we go to a restaurant together, and they have a set menu for that day, and if wanton soup is the first course, he’ll eat it.

NG: Lin is a well-known foodie. What’s his favorite restaurant in Palo Alto?

DS: The Peninsula Creamery. He likes to have a sandwich and get a shake or a float.

NG: Okay, shakes and floats aside, let’s get to the meat of things. In signing with the Nets, Jeremy likened it to investing in a startup company. How do you look at it?

DS: I agree with that. And it’s also a chance for him to be a primary playmaker on a team where the coach and organization believes in him.

NG: What is it you see in Kenny Atkinson that you didn’t see in his coaches in Houston, LA, and Charlotte?

DS: Kenny’s a professional teacher and coach who firmly believes in developing players and teams into greatness. Skill, effort, and cohesion wins at any level of basketball. Can’t wait to see how good they can be.

NG: Well, the “experts” think the Nets will be a miserable team and not win more than 20 games. How do you react to that?

DS: I say if you have five guys playing together – and it’s still a team game—they can win without having one big star.

NG: What changes did you make this summer in Lin’s shooting form?

DS: Change is too strong a word. I prefer we worked on reinforcing the tweaks we made last summer.

NG: After you and I talked last summer about the changes you two made in his shooting form, Lin fans were expecting him to have a great year in three-point shooting. Yet he shot only .336 from beyond the arc, the second lowest of his career. Why do you think that happened?

DS: Last season he wasn’t applying the tweaks. He didn’t have reinforcement from anyone on his tweaks, and when you don’t, players tend to revert to what they were doing before. Last year when he shot he was hoping it went in instead of knowing it was going to go in. I could always tell from his body language that he wasn’t as comfortable as he should be.

This summer we re-calibrated the timing of his release from a 1 ½ or 2 motion jumper to a 1 count shot. We were doing a lot of reinforcement with a lot of reps so the motion became more a part of him. We also helped his release get faster by not bringing the ball up as high. We worked on shooting the ball from his eyebrows like Curry does, instead of what a lot of players do by shooting when the ball is above forehead.

I came up with a catch word for him to say to himself every time he starts to shoot: “8th grade shot.” Why? Because an 8th grader just jumps & shoots. They don’t think about how LeBron or Curry or any star shoots. They do what feels natural.

NG: Describe the process of working with Lin this summer:

DS: The first 3 weeks I was just getting him to be consistent with his shot so when he’s off with his team this year he knows his shot and is comfortable with it. Just like a musician knows he’s working with a fine-tuned instrument. As the summer wore on, we worked on getting him to use the same motion on every shot he took, whether it was off the dribble, coming around a screen or whatever. Every single shot has to have the same jump, same release.

One of the things we did was I had my current players (Pinewood girls) be the passer for him on his three point shot, and he was hitting 85 pct of them. Afterwards Jeremy said to me, “That’s the best I ever shot.”

NG: Lin wrote in his blog that he was making changes in his style for the time when he’ll be older and can’t rely on his athleticism. What did you do in that regard?

DS: The main thing we did was work on the efficiency of his shot so he didn’t have to use as much energy.

NG: Will being a starter help Lin’s shooting percentage this year?

DS: He’ll have a higher shooting percentage because after he takes his warm-ups an hour and half before the game, and does his regular pregame shooting twenty minutes before tip-off, he won’t have to sit on the bench and get cold before he goes into the game. The fact that he’s a starter and is always warmed up will help his percentage by itself.

NG: The Nets have a lot of young developing players. How do you see Lin helping them to get better?

DS: I don’t think any player makes another player better. I prefer to say Lin will help his teammates by giving them an advantage when they’re shooting by getting the ball to them where they have an open shot. He always tries to give a player an advantage, whether it’s because he gets them the ball when they’re open, or whether he attacks and by doing so gets somebody open. A great basketball player is someone who gives his team advantages.

NG: Project some possible numbers that Lin will put up this season:

NG: Those are lofty numbers. So I have to ask: do you think Lin has a shot to become an All-Star this season?

DC: Yes I do. Aside from his improved numbers because of more opportunities, I think that because of his global popularity it is something that could be a reality.

NG: Lin still doesn’t get credit from many writers for the improvements he’s made in his defense, even after Hornets coach Steve Clifford praised his D often. Why do you think that is?

DS: A lot of people don’t understand that in order to play good D it has to be team defense where everybody is working together. Last year sometimes it was like he was playing D on an island. There was no plan to help each other if a guy should get caught in a screen or on a switch and so on.

NG: I know you work with a lot of players to help them improve their game. I’m curious whether you work with any Asian American kids now and if so, how have they been influenced by Lin?

DS: Yes I work with several aspiring young Asian American players. I really haven’t seen how they’ve been influenced by him other than they love the game and they admire how hard he works and the manner in which he plays the game.

NG: How has Jeremy Lin changed your life?

DS: The biggest change is that I get to play less golf. I used to do six months of working with individual students, from nine years old up to high school and college. Then I’d spend six months coaching my own team. But when the word spread that I was coaching Jeremy Lin, it attracted more individuals to me so I was a lot busier and didn’t get to play golf as much. I also don’t have to advertise at all because of Jeremy.

NG: What do you think will be Lin’s most lasting legacy?

DS: For me, it’s that he’s a true athlete, a relentless competitor who plays every play, is physically tough, and is in constant quest of mastering his craft.

NG: Tough question: How does seeing the results Lin has had working with you over the years compare with you coaching your girls high school team to six state titles and being named Northern Cal Coach of the year?

DS: Both have significant meaning to me in the two aspects of my coaching: individual development and team development. I derive great satisfaction in watching a player improve as a result of our individual work together. Working with Jeremy and all of my players is great because you develop lasting, trusting relationships. I thoroughly enjoy watching their progress.

NG: And your own legacy?

DS: Well, I love coaching a team that plays with joy and passion, systemic skill, and a singular purpose. I want the basketball gods looking at my teams and saying, “I love watching that team play.”