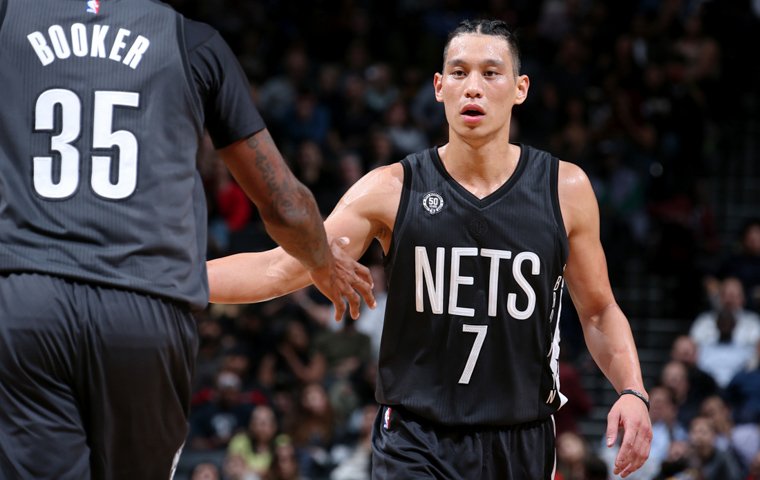 Jeremy Lin is finally back and healthy to play for the Brooklyn Nets after putting his injury nightmares behind him. No longer is he now wearing his stylish clothing cheering from the sidelines, he is finally back on the floor where he can make a big contribution and impact for the Nets. With the return of Jeremy Lin, everyone is hoping he can transform Brooklyn’s fortunes and achieve some wins.

On the 26th of December Jeremy Lin reinjured his hamstring and it has been nearly two months since he last suited up in the Brooklyn Nets uniform. His rehab was a long and frustrating process, there were setbacks along the way which delayed his comeback by a number of weeks which made it more annoying.

Since Lin has just come off a pretty long layoff, his body needs to adapt to playing at a high intensity. He is also still learning about his new team, having only just played 12 games all season that is not enough to mesh with his teammates. With the return of Lin, the Brooklyn Nets will benefit greatly with the skillset he possesses and the attention he draws from the opposing team.

One thing the Nets have been missing whilst Lin has been sidelined was the spark was just not there. He’ll give the Nets a spark and lift and give them a sense of direction, being the point guard who can control the speed of the game. The Nets did not have anyone who can win them games, the X-factor some may call it. With a 9-47 record, the team are seriously lacking confidence and the self-belief to win games. These loses and the unwanted record of losing 17 consecutive home games, the most in franchise history, has taken its toll mentally on the team and its fanbase.

What stood out for me was the lack of fans attending the games at Barclays Center and how quiet the crowd is. February 1st against the New York Knicks at home highlighted this. This particular game, Barclays seemed to be taken over by Knicks fans with the amount of noise they were making for their team. The couple of solutions that can generate more interest to Nets games is by winning and having an exciting player to watch. Jeremy Lin is unquestionably an exciting player and he alone will generate more interest.

Jeremy Lin will bring stability in the point guard position, being a seasoned veteran he is more than capable of guiding his team to victories and reassuring his teammates that everything will be fine when the ball is in his control. Rookie point guard Isaiah Whitehead has improved a lot whilst Lin has been out but he just doesn’t have the experience and know-how to get the job done consistently.

It has been well documented the Nets struggle seeing out and winning close games. It is frustrating watching the Nets play hard and end up taking tough loses when they’re in winnable positions. They haven’t found anyone to step up in the fourth quarters and grab the game by the scruff of the neck to lead them to victory. Nobody seems like they want to take on the challenge and responsibility in the fourth quarter.

This will surely change when Lin is playing in crunch time. Some people call him “Mr. Fourth Quarter” and there is a reason they call him that. Lin has the ability to elevate his game to that extra gear in the fourth quarter, it is like he has a switch available to him which he can turn on. Lin enjoys stepping up to the plate and not shying away, he is not afraid of failure as long as he gave it a go.

The statistics show that this season with the Nets, Lin’s net rating in the fourth quarter is a healthy 10.2. I know it’s not the biggest sample given the lack of games Lin has played but this somewhat indicates that with Lin on the floor, his team is better.

It is to be expected that Lin will show signs of rustiness, he’ll need to blow out the cobwebs and by achieving this he’ll need minutes. After coming back from his first hamstring injury, it took Lin a good few games to find his rhythm and feel for the game. As soon as he got his rhythm back, his hamstring started playing up again which was just not what he or the Nets needed.

I’m sure Lin will be playing limited minutes to ease his way back into the flow of things. The Nets will not try to push him too hard too soon and risk another injury since his body has not been tested in a fast pace NBA game for a long time.

Lin’s conditioning will not be where it needs to be to play at the intensity he wants, this may be frustrating for him and his fans at first but it is to be expected after coming back from a long layoff. I will also not be surprised if Lin will be rested early into his comeback knowing how the Nets operate regarding player management. They are definitely more on the cautious side and it is not a big problem when the team is way out of playoff contention.

The Nets have somewhat developed parts of their game since Lin last stepped on court with the team and he will have to familiarise with his teammates because they have not played with him much at all this season and the understanding between both parties may be a little of and mistakes will most likely occur. However, Lin is a smart guy and it’ll not take him long to adapt and fit into Kenny’s system, he has done this throughout his career, it is nothing new to him. The more time he gets on court the more comfortable he’ll be and when he is 100% comfortable we’ll see some spectacular performances from him.

Expectations of Lin will have to be realistic because he will not hit the ground running because it is just unrealistic given the amount of time he has missed. This is not me underestimating him, it is so that people do not get disappointed when he doesn’t hit the heights before his run of injuries. Allow him time to play through his mistakes and to get rid of the rust and he’ll eventually reach the high standards he sets himself. The main goal for Lin will be to stay injury free till the end of the season and to play as many games as possible.