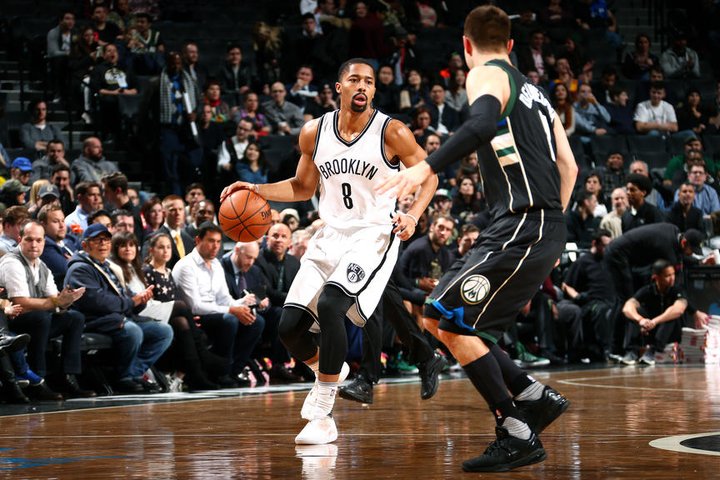 BROOKLYN, NY - FEBRUARY 15: Spencer Dinwiddie #8 of the Brooklyn Nets handles the ball during the game against the Milwaukee Bucks on February 15, 2017 at Barclays Center in Brooklyn, New York. NOTE TO USER: User expressly acknowledges and agrees that, by downloading and or using this Photograph, user is consenting to the terms and conditions of the Getty Images License Agreement. Mandatory Copyright Notice: Copyright 2017 NBAE (Photo by Ned Dishman/NBAE via Getty Images)
Home
Brooklyn Nets
Nicholas LeTourneau

Two little mice fell into a bucket of cream. The first mouse gave up and quickly drowned, but the second mouse wouldn’t quit. Eventually, he struggled so hard that he churned that cream to butter and walked out. Tonight, the Brooklyn Nets were not that mouse.

In the final game before the All-Star break and what could possibly be Brook Lopez‘s final game in a Nets uniform, Brooklyn gave up 129 points in a losing effort to bring the losing streak to 16 games. Despite giving up an insane amount of points, this was one of the first games in a long time where everything on offense seemed to click despite Jeremy Lin being sidelined.

The Nets scored 125 behind Lopez’s 36 points while also getting major contributions from Spencer Dinwiddie, Trevor Booker, Bojan Bogdanovic, and Joe Harris. The team as a whole shot 52.3 percent from the floor, out rebounded Milwaukee 51-46, had 30 assists, and shot almost 40 percent from deep. Things were looking good.

Unfortunately, you aren’t going to win many games when you let your opponent shoot close to 60 percent from the floor and turn the ball over 17 times. This game should be both inspiring and eye opening to Brooklyn, who showed that they have the potential to hang with good teams but also magnified their two biggest flaws; defense and turnovers.

It is no secret that the Brooklyn Nets are one of, if not the, worst defensive teams in the NBA. Lopez is a decent interior defender, Caris LeVert can usually lock down players one-on-one, and Rondae Hollis-Jefferson has all the physical tools to be an excellent defender but the rest of the team is abysmal. The Milwaukee Bucks showed that today.

Greg Monroe and Kris Middleton had gigantic games off the bench, scoring 25 and 20 points, respectively, and Giannis Antetokounmpo led the team with 33 points. Michael Beasley had 14 points on seven of nine shooting, both Matthew Dellavedova and Tony Snell had 10 points, and the Bucks scored 68 points in the paint.

After looking at Brooklyn’s roster it isn’t surprising they are giving up almost 70 points in the paint to a team like Milwaukee but at the end of the day, the blame has to fall on the coach. Kenny Atkinson has gone a giant disservice to this team by focusing solely on offense and learning motion.

Although the focus has lead to a productive offense despite Lopez being the only reliable player, unless Atkinson brings in a defensive-minded assistant this offseason this rebuild will never gain momentum. New players could be signed and the roster could be completely different but if no one teaches them or makes them play defense, coming out on the losing end of 129-125 games will become fairly common.

If Jeremy Lin was playing in this game the defense wouldn’t have been drastically different, but the turnovers would’ve been way down. The Nets miss Lin and his steady hand facilitating this offense, badly.

Brooklyn turned the ball over nine times in the pivotal third quarter alone. The Bucks forced 16 steals, preying on guys like Isaiah Whitehead, LeVert, Booker, Foye, and Bogdanovic. Being forced to dish out so many minutes to rookies and players that aren’t used to running an offense has prevented this team from being competitive in many games and was one of the largest factors in their downfall.

Atkinson’s motion offense is complex, especially if you have never been apart of an offense like it. There are lots of nuances to pick up on, spacing and timing are key. It is all about knowing your options, timing cuts and movement, and making sure everyone is in rhythm. Instead of having calm, cool, collected veteran point guard Lin who is very close with Atkinson, the Nets had to hand the keys to free agent Randy Foye and rookie Isaiah Whitehead.

The Brooklyn Nets have potential. There is clearly a system and culture being established, Rome was not built in 82 games. It is no secret that the Nets need to make major changes if they want to keep moving in the right direction but Kenny Atkinson realizes this. You’d have to be dense not to.

Brooklyn got incredibly unlucky when it came to injuries this season but as they go into the All-Star break they can rest and come out at full strength to end the season on as high a note as possible.