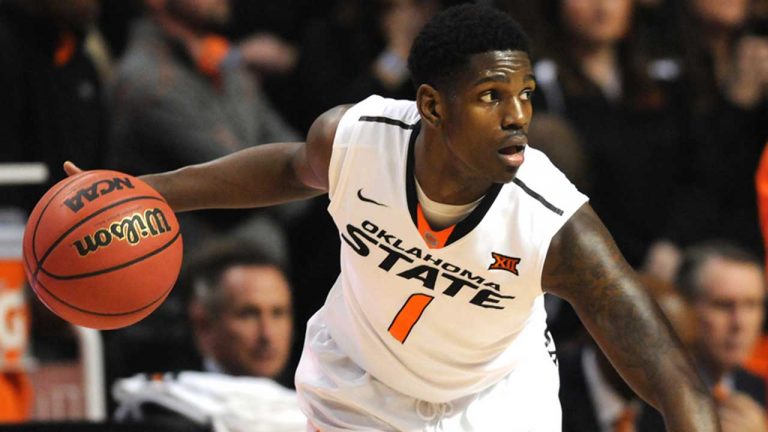 For the upcoming NBA draft, the general consensus is that the Brooklyn Nets will focus primarily on acquiring a big man along with a wing player. It is evident by the list of players that have worked out for the team thus far. Brooklyn has only worked out a few point guards, but the draft is unpredictable and it is possible that Sean Marks could be interested in finding a backup to Jeremy Lin and add depth in the backcourt. Kenny Atkinson has addressed the need to have additional playmakers to run the motion offense and after the first tier of point guards are drafted in the lottery, Jawun Evans of Oklahoma State is on top of the second tier that could be available for the Nets in the first round. Some mock drafts have Evans in the early second round but personally I don’t think he is getting out of the first round.

Evans entered the draft after his Sophomore campaign, where he made First Team in the Big 12 and Oklahoma State improved their record from 12-20 to 20-13 in his second season, as the Cowboys made the NCAA Tournament. Following his first season in college, he was named Freshman of the Year in the Big 12 and his importance to the team was felt when they finished 1-10 to close the season after he missed time due to an injury to his shoulder. As a Sophomore, he averaged 19.2 points on 43.8 percent shooting and 37.9 percent from deep, he shot 81.2 percent at the free throw line, and he dished out 6.4 assists in 29.3 minutes per game. Evans was clearly the go to guy on the team and statistically, he led the most efficient offense in the country. He ran the Cowboys’ offense to an adjusted 126 points per 100 possessions.

Draft Express has his measurements at 5’11 1/2″ with a 6’5 1/2″ wingspan and a max vertical of 33.5″. Although he does not have ideal height for a point guard in the modern NBA, which is around 6’3″ or 6’4″, he plays bigger than his size with the way he can absorb contact around the basket and he uses his change of pace and quickness when he drives to the basket. Evans went to the free throw line 7.9 times per 40 minutes which is seventh best among NCAA players in the top 100 for Draft Express and he averaged 81.8% from the line in his two seasons at OSU. He is good at using floaters in the paint to score over big men and he made a solid 46.2% of his 104 attempts last season. To compliment his drives to the basket, Evans is a also a threat from 3 and he shot 40.7% in his 2 seasons at OSU.

According to Draft Express, Jawun Evans shot a respectable 38.7 percent on his off the dribble jump shots (111 attempts) and he is a good enough jump shooter to keep the defense honest. In addition to his scoring prowess, Evans is a very capable passer as he led the Big 12 in assists with 6.4 and his 8.8 assists per 40 minutes is tops among NCAA players in the top 100 according to Draft Express. He can make all the passes to get his teammates involved both in transition as well as in the half court and he has a good feel for the game to decide when to pass and when to look for his own offense. OSU ran a heavy pick and roll offense as 56.3 percent of his offensive possessions ended with him as the pick and roll ball handler as per Synergy Sports Technology. Evans is comfortable attacking the ball screen in a variety of ways and he is astute when it comes to rejecting the screen to get into the lane or forcing a switch to create a mismatch with a big man.

Nearly 10 percent (270-of-2822) of all their offensive possessions ended with Evans as the pick-and-roll ball handler taking a shot, earning free throws or committing a turnover, while another 9.1 percent (256-of-2822) finished with Evans passing out of the pick-and-roll, per Synergy Sports. Evans averaged .900 points per possession (81st percentile) as the pick-and-roll ball handler and he is a totally capable facilitator as he posted 1.098 points per possessions (75th percentile) on passes out of the pick-and-roll as per Synergy Sports and majority of those passes found their way to an outside shooter. With three shooters and one big man surrounding Evans on the court, Oklahoma State’s roster was similar to many NBA teams and the pick and roll continues to be one of the most effective plays in basketball.

Jawun Evans will always likely be at a disadvantage on defense because of his physical tools but he is tough minded defensively and won’t be pushed around easily with his strong frame. He works hard on the ball and he moves his feet well to pressure his opponents while he also has quick hands and long arms to generate 2.3 steals per 40 minutes. Evans is a pesky defender and he uses his long reach to poke at the ball and deflect passes. He always plays with a chip on his shoulder and he doesn’t back down from challenges. Perhaps he has the little man’s syndrome and he has a lot to prove.

Although Evans has little trouble getting to the rim, he has struggled to score once he gets in the lane as his 45.3 percent two-point field goal percentage ranked fourth worst among NCAA prospects in the top 100 for Draft Express. He is not afraid to attack the basket and challenge shot blockers but he did not find much success finishing from close range at the college level. Evans converted just 47 percent of his half-court attempts inside the paint last season according to Synergy Sports Technology and his lack of size along with limited explosiveness are issues that he will have to overcome in the NBA. Even though his scoring took a big jump from 12.9 to 19.2 points per game, his field goal percentage went down from 47.1 to 43.8 and he can be a streaky shooter.

In regards to his perimeter game, Jawun Evans converted only 35 percent of the overall 163 jump shots logged by Synergy Sports Technology and while his mechanics are okay, he will need some tweaks to his form to be a respected shooter at the next level and be able to attack the defense in multiple ways. Most notably, he needs better balance on his pull-ups as he tends to sway sideways which hurts his accuracy and he can clean up his release point to create a more consistent shooting form.

His lack of size will always be somewhat of a hindrance in terms of getting his shot off so anything he can do to improve will be beneficial considering how important this part of his game will be at the next level. Although he has an assist to turnover ratio that is better than 2:1, Evans can get into trouble in traffic due to his size and it can lead to turnovers.

While Jawun Evans tries to make it as difficult as possible for his man leading up to the catch, opponents have an easy time shooting over him as they can catch and shoot over his closeouts or rise above him on jumpers. He also doesn’t have the lateral quickness needed to stay in front of his man on drives to the basket and he lacks a high level of defensive upside and versatility that could prevent him from being a two-way contributor as a starter. It is fair to say that his lack of height prevented him from being a much higher pick as all the point guards that are projected to go in the lottery are 6’4″ and over.

According to NBADraft.net, Evans will almost certainly start his career in a reserve role but he can become a starter after a few years in the right system. His floor is relatively high and he has what it takes to stick around in the league even if as a reserve. Even if he struggles on defense, I think his offense will make up for his shortcomings and provide value to the team.

Jeremy Lin will be a fine mentor if Evans is drafted by the Nets and the point guard depth will be upgraded over last season. Evans should be more than capable of running the second unit effectively while providing an additional scoring punch that is needed from the bench and at times, he could even play together in the backcourt with Lin to change things up with the lineup. Both players are known for their abilities with the pick and roll and Kenny Atkinson should incorporate more pick and rolls in the motion offense.

The Atlanta Hawks are a good comparison to the Nets since they also run the motion offense and in the last two seasons as per NBA.com, Dennis Schroeder had 54.4 percent and 50.5 percent of PNR plays run per offensive possession and it was one of the highest marks for both seasons in the league. Pick and rolls with good spacing and three point shooters produces efficient offensive teams and Jawun Evans already has experience with that style of play in college. This is a point guard league more than ever and I would rather bet on a 20 year old with upside like Jawun Evans rather than a 30 year old with no NBA experience. I am looking at you Milos Teodosic.

Another factor which may influence Marks to draft Jawun Evans is that Jeremy Lin is likely to opt out after this coming season as he can exercise his player’s option. If Lin does decide to go elsewhere, it would be nice to have a promising young point guard take over and Evans has the talent to be a successful starter in the NBA.