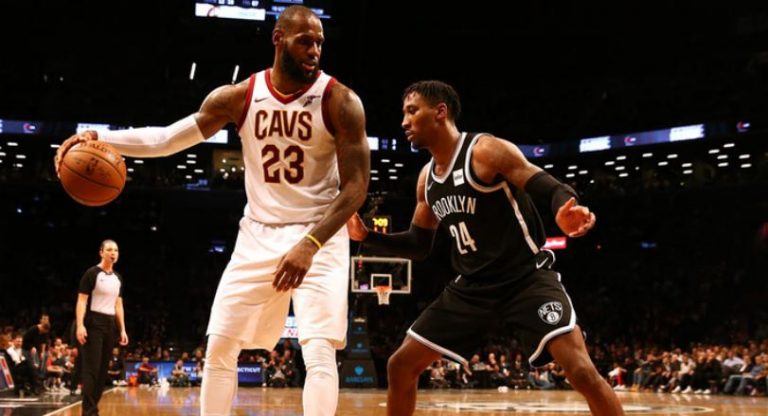 Brooklyn Nets host the Cleveland Cavaliers in a matinee match and the final game of their season series.

The king of the NBA arrives with his reformulated squad to face the Brooklyn Nets in a rare matinee match. With this being the fourth game this season between the squads Brooklyn has witnessed all iterations of the 2017-18 Cavaliers. Their first two meetings occurred in the first month of play featuring the pretrade group. The third meeting occurred shortly after the trade when the Cavaliers were still flying high and hadn’t settled into the issues which still afflicted the Cavaliers – such as defense.

This final game comes as the Cavaliers welcomed back Tristan Thompson, Larry Nance and Rodney Hood from injury and represents just the second game off the injured list. The Cavaliers still aren’t at full strength given Cedi Osman‘s hip issues, the potential for Jeff Green to be out with illness and Kyle Korver away due to a death in the family.

However, this is closer to the team the Cavaliers will take into the postseason although there are multiple questions remaining about the squad.

Who plays where and when?

Ten games seems like an unusually short period of time to find chemistry and figure out lineup choices. Yet, that is what the Cavaliers have left to work with.

For example, in the last game the Cavs chose to keep Jose Calderon in the starting lineup to play alongside George Hill. Given Cleveland’s issues on defense this may not be a long term fix. Factor in J.R. Smith may not have minded moving to the bench to allow Rodney Hood or Jordan Clarkson to spend additional time transitioning into the system. Yet, it’s quite another ask to have him come off the bench for Calderon.

The larger questions revolve around where the Cavaliers elect to play LeBron James. Starting him at the four is a huge advantage for Cleveland as few squads can counter with a viable defender. Mind you finding a small forward to guard James is equally difficult, but who the Cavaliers put in that position is equally an issue with Hood not yet demonstrating consistency (or Jeff Green for that matter).

Arguably the position with the most uncertainty is the starting center. With Kevin Love back it offers Ty Lue (assuming he’s back from his self imposed time off to deal with health issues) multiple options. Love spreads the floor and can rebound and has enough size to play the five, particularly in the small ball era. Or, the Cavaliers can use Larry Nance Jr. to inject energy upfront with Nance being a decent rebounder and rim protector. Thompson is the guy who brings the best rim protection to the court and is undeniable the Cavs best big man defender. However, the offense isn’t as potent with either Thompson or Nance playing this role.

And that fact, is the greatest issue the Cavaliers face. Scan up and down the roster with a view to offensive players versus defensive players. Other than LeBron James the only players who consistently offer two-way ball are George Hill (who is inconsistent offensively) and JR Smith (who isn’t consistent defensively). Moving forward this issue poses the greatest problem for the Cavaliers.

On the season the Cavaliers rank 28th defensively. Post All-Star break the Cavs rank 18th defensively, but this ranking isn’t a sign the team has made huge strides. This because the players who’ve helped raise the rank were on the court because so many offensive players were injured. Factor in, since the trade the Cavaliers have held just three teams under 107 points and those teams (Memphis Grizzlies/Detroit Pistons/Phoenix Suns) are all headed for the lottery.

Considering six of the post trade 16 games are lottery bound and only four ranked in the top four offensively also affects the defensive ranking.

Dive a little deeper into the stats and more warning signs arise. Since the trade, opposing teams shoot 45.5 percent from the field which ranks 17th in the Association. Cleveland also allows opponents to shoot 37.2 percent from deep (ranks 17th) and is higher than their pre trade percent. As for opponent assists they allow 25.5 per game (rank 24th) and the 20th most opponent points (111.1) which again is more than they allowed pretrade.

Combine all these factors and what it points to is the Cavaliers have issues stopping transition, perimeter and paint scoring. In essence they can try to plug one hole and another will spring a leak. Even if the Cavs can focus on one area smart teams will simply attack them from their other weak areas.

This is the last year Brooklyn Nets fans will have to throw things at the TV screen as they watch another of their draft picks sending a quality prospect to another team. And, while this wasn’t Koby Altman or the Cavaliers fault Brooklyn’s pick will head to Cleveland it doesn’t make it any less frustrating.

In fact, for the Nets it should provide extra motivation to beat them this afternoon. A win might not matter in the grand scheme of things, but it sure will feel good if that one win makes the difference in Cleveland losing out on a player they desire in the draft.

Since the teams played less than a month ago, not much changes in terms of how the Nets should approach this game. Coach Kenny Atkinson has to decide if he will force LeBron to be a volume shooter or a distributor. Furthermore, should he Nets employ their guards to drive at the Cavs questionable interior defense or fire away from the perimeter where the Cavaliers don’t display prowess either.

If Cleveland employ Nance at the center Jarrett Allen may be able to serve up some quality minutes. On the other hand, Rondae Hollis-Jefferson will have his hands full trying his best to stop LeBron James.

Odds: Cleveland is an 6.5 point favorite, and the over/under is 228 points.