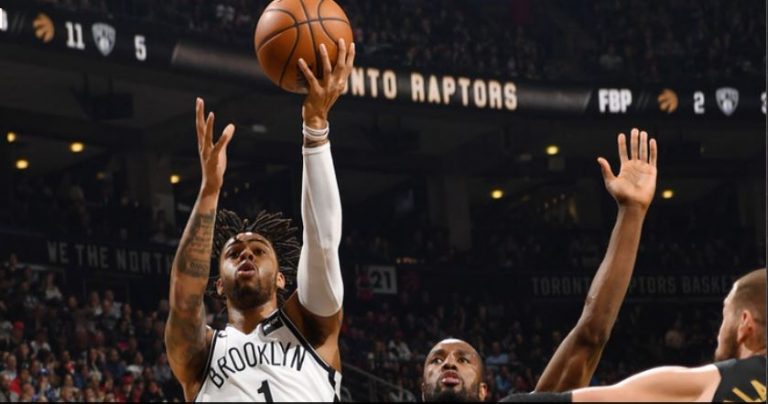 Like a train chugging along about to come into the depot the Brooklyn Nets kept waiting for the real Toronto Raptors to show up. The inevitability of that occurring was palpable. Although the Nets took it to the Raptors and for much of the night were the better team ultimately it comes down to a simple adage – winning teams find a way to win.

While the writing team generally uses this space to break down the game (don’t worry – the highlights/key producer is below). Instead the majority of my focus in this piece addresses the surprising similarities between the Raptors and Nets. Moreover, it offers optimism for just how close the Nets may be to returning to the upper echelon.

Respect for Nets in Toronto:

Unlike teams who tend to play down to their competition (and, yes occasionally the Raptors do that), this contest did not fall under that category. Despite sweeping the Nets in each of the past three seasons Toronto opined post game on how impressive the Nets have been.

Other than one of the games in the season series the Nets put themselves in position to win each contest.  It’s important Kenny Atkinson’s charges remember that. When the Raptors began their initial culture reset the first puzzle piece was to be considered as a tough out. I can’t speak for other cities, but the fan base (and franchise) in Toronto are definitely cognizant of Brooklyn’s no quit efforts.

Since I’m a native Torontonian I caught the Canadian coverage and from the broadcast team, to Raptors coach Dwane Casey to the players there was effusive praise for this never quit effort of the Nets.

Casey told the media scrum post game “we (Raptors) did not deserve to win that game.”

Leo Rautins and Matt Devlin spoke of D’Angelo Russell‘s fit in Brooklyn and showered Jarrett Allen, Caris LeVert and Rondae Hollis-Jefferson with praise. For Allen they expect big things and already feel RJH is the leader on this Nets team.  Although I don’t want to put words in their mouths, the overriding impression is the internal Raptors group feel Brooklyn may not be that far off becoming a playoff seed again.

The reason I mention this is some fans never get to hear positive feedback from outside and there was nothing but respect and love showered on the Nets franchise.

In fairness, the Raptors are a woefully exhausted troop. Toronto played their sixth game in nine days including a back to back and a matinee thrown in for good measure. Toronto’s schedule in March has been horrid. Three back to back sets (one each for the past three weeks) and 2 matinees. Arguably the worst part was no consecutive days off. Furthermore, including this week, this is the fourth week  in a row with four games.

In contrast, the Nets played one back to back set, no matinees (although one is coming Sunday). And Raptors players are likely quite envious of the three sets of two consecutive days off the Nets got this month. Plus, this is the first week this month Brooklyn will play four games in a week.

Hey, the teams all go through this, but it does provide some insight regarding Toronto’s defense looking less than stellar, particularly this last week.

For the most part there is no love lost for DeMarre Carroll in the 6ix. The player Brooklyn acquired is far from the one Toronto received. In truth, the version of Carroll Raptors fans witnessed tonight was the player most expected when Ujiri recruited him in free agency. Conversely, this version of the Raptors and style is where Carroll is best suited.

His injury (and later surgeries) obviously affected his time in Toronto. But, it was his outspokenness upon leaving which annoyed the fanbase. For the most part, fans thought he was a great guy off the court, and most were willing to let sleeping dogs lie when Masai Ujiri paid Sean Marks to take him. Post trade, Carroll (who was obviously embarrassed) made negative, passive aggressive, comments aimed at DeRozan, Lowry and Casey. It did not go over well in Toronto.

Then, in the first meeting between the teams at the ACC, Carroll wasn’t dressed. Reports were he was healthy, but taking a rest day for maintenance. Unfortunately, that fed the rumor mill.

Putting this in perspective – in last year’s playoffs, Carroll was a team worst 113.1 on court defender and Toronto was a negative -12.4 net differential with him on the court. In the Cavaliers series he shot 23 percent on wide open corner threes.

I’m sharing this just to explain why ACC fans booed, particularly after he tried to kick out into Lowry and pulled DeRozan down. Again, the irony is if Carroll had remained in Toronto he’d likely be having a career season. And, if he hadn’t shared his angst post trade he probably would have received a hero’s welcome tonight.

As far as the players go, pregame DeRozan and Carroll were spotted chatting and laughing, so there obviously aren’t issues between the players.

Clearly if D’Angelo Russell could select a team he likes to play it would be the Toronto Raptors. Last time out Russell scored 24 points in the first quarter. This included connecting on his first seven perimeter shots, finishing with 32 points. This evening Russell recorded his first career triple-double and made life difficult for the Raptors defense.

His final stat line was an impressive 18 points, 11 rebounds (2 offensive boards), 13 assists, 1 steal and 2 turnovers. Although he wasn’t as efficient as his production in the game March 13, this effort was arguably more impressive.  Moving forward, assuming Jeremy Lin‘s return next season it could provide nightmares matchups for the Raptors. This because the Raptors who boast possibly the greatest talent and depth in the point guard position will get a run for their money from the Nets.

There are obvious backcourt parallels:

Personally, I find myself constantly saying if the Nets could just find a way to grab Pascal Siakam or a player of his ilk (or Jakob Poeltl, or Lucas Bebe Nogueira) – – – you get the drift.

Toronto has a stellar development group and a wealth of young talent. Likewise, Brooklyn has done a masterful job of developing there youthful core such as RHJ, Dinwiddie and Isaiah Whitehead. Sean Marks has made smart choices with late draft picks like Jarrett Allen and savvy moves to add players like LeVert, Russell and others.

Moving forward a few key additions via free agency and draft picks could help propel the Nets up the ladder. It seems like forever ago the Raptors were looking to tank to draft Andrew Wiggins. Instead Masai Ujiri traded Rudy Gay, made smart draft picks and trades and committed to developing the core.

From that point forward the Raptors became a successful franchise.  A seldom mentioned fact is the Raptors are the most winning franchise in the East over the past five seasons.

It might feel like the Nets are eons away from the upper echelon, but the truth is with Sean Marks finally unshackled, a roster taking form with youthful talent and quality character plus a firm identity this Nets team may not be far removed from emulating what the Raptors are doing.