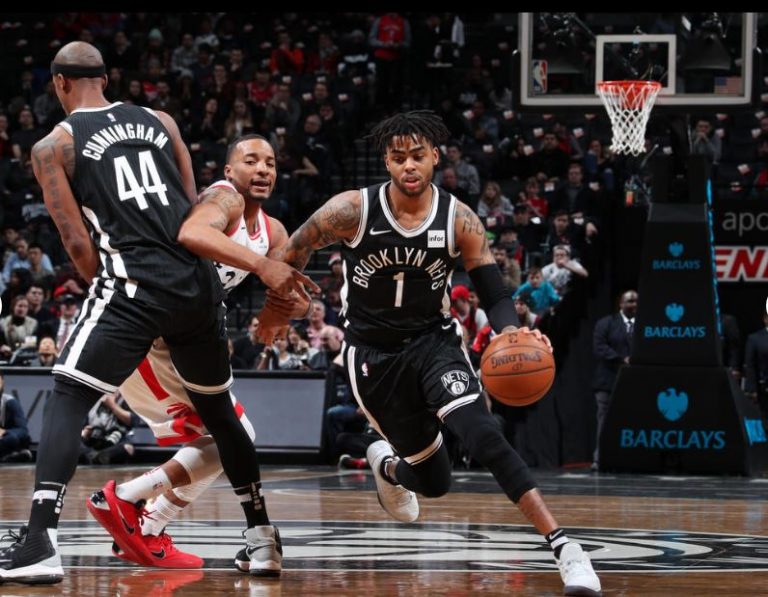 How To Net The Win: Brooklyn Nets at Toronto Raptors 3-23-23

Ten days ago the Toronto Raptors arrived at Barclays to tip off versus the Brooklyn Nets. At the time the Dino’s were on an eight game win streak, playing their fifth game in seven days and still basking in their season sweep of the Houston Rockets.

The Brooklyn Nets jumped on the fatigued Raptors posting 40 points in the opening frame to break an oft repeated bad habit of slow starts. D’Angelo Russell was exceptional scoring 24 points.

The starting point guard couldn’t miss from deep as he connected on his first seven perimeter attempts. By the half Brooklyn led by 10 and were seemingly well on their way to stealing a game from the east’s top seed. A feat only two sub .500 teams have accomplished all season (Knicks and Mavericks both occurring prior to the New Year).

A tale of two halves:

If only the Nets could have called it a day at the half.  As the Raptors are wont to do, the squad awoke for the second half and came out of the lockers with an entirely different game plan.

Russell who couldn’t miss in the first half was limited to eight points in the second. More importantly, after scoring 40 first quarter points (67 in the half), the Nets were reduced to 35 for the entire half.

This is definitely a unique situation the Nets find themselves in tonight. For the first time since January 20th, 24th and 26th the Raptors have lost two of three games. Conversely the Nets enter having won two of three.

Brooklyn hasn’t beat the Raptors in their past 11 games, so they catch the Raptors at an opportune time in the schedule, which has been treacherous given the  frequency of games. Tonight’s game represents the Raptors third in four days. Dig a little deeper and the numbers offer viable evidence for the squad allowing both the Thunder and Cavaliers to score 132 points (the only 130+ scoring games against Toronto all season).

To wit, this is Toronto’s fifth game in seven days and seventh in ten days. Putting this in perspective the team North of the border has played three sets of back to backs (one each week for the last three weeks), two 1:00 PM matinees one of which came with one day’s rest after a back to back series and three playoff seeds (Pacers, Thunder, Cavaliers).

In contrast, the Brooklyn Nets have played one fewer contest since the teams last met, one less back to back series and one current playoff seed (Sixers).

In spite of this, the Raptors still boast the best home court record in the NBA and have a propensity for delivering immediately following a loss. For example, right after the OKC loss, Toronto (although looking fatigued early in Orlando) delivered a defensive clinic in the fourth quarter in Orlando. Toronto, didn’t give up a field goal to the Magic until 4:31 of the frame. Only two other field goals were made (both perimeter shots scored at 1:24 and :20 seconds) along with two early free throws. This resulted in Orlando scoring 10 points total (with six of those points as noted coming in the last 1:30).

Toronto score 112.5 ppg to rank third whereas the Brooklyn Nets rank just behind in 14th with 106.2 ppg.

Toronto increased their perimeter attempts this season with a middling result, as they rank 19th via an efficiency of 35.9 percent. Like the Rockets and Nets, the Raptors get up copious attempts (32.9) ranking third and average 11.8 completions (4th). Notably, since getting his rest day, Kyle Lowry is shooting over 62 percent from the perimeter (18 of 29).

The Brooklyn Nets perimeter efficiency of 35.2 percent ranks 26th. Only the Rockets attempt more three pointers than the 35.1 the Nets take. Because they take more shots they also make more (12.4) which also ranks 2nd in the NBA.

Arguably, this area showcases the Raptors greatest growth and is symbolic of the revamped pass friendly offense. Last season Toronto ranked 30th with 18.5 assists per game, but this season rank 6th with 24.1 per game.  The Brooklyn Nets are also a positive in this area via their 12th ranked 23.2 assists per game.

History: The Raptors enter this match with an 11-game win streak over the Nets.  The Atlantic Division rivals  have a rich history particularly in the postseason. Two of the Raptors first round playoff series has ended at the hands of the Nets. In the first meeting former Raptors superstar Vince Carter and Jason Kidd bested the Raptors.

More recently, Kevin Garnett, Deron Williams and Paul Pierce won game 7 to knock the Raptors out of the playoffs. If the Raptors win tonight it will mark three consecutive sweeps of the Brooklyn Nets in the regular season.  The Raptors hold the all-time record having bested the Nets in 49 of their 88 matches.

Odds: Toronto is favored by 13.0 points and oddsmakers predict an over/under of 220 points.