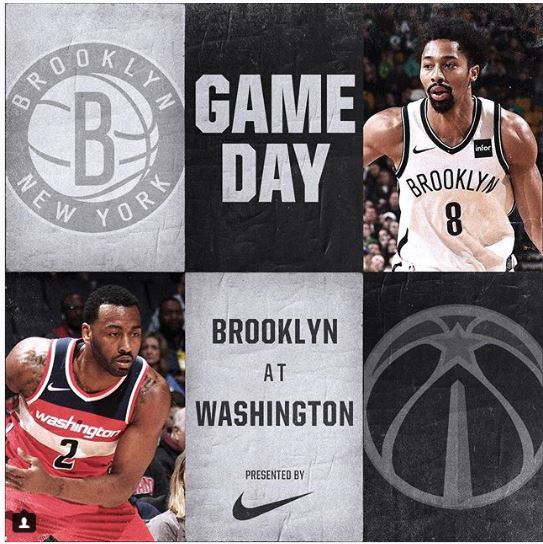 How To Net The Win: Brooklyn Nets at Washington Wizards 1-13-18

The Brooklyn Nets head to Washington on the back of a 110-105 away victory over the Atlanta Hawks. Brooklyn were able to survive a career night from Atlanta guard Denis Schroeder. The German filled the stat sheet with 34 points, 7 assists, 3 rebounds and 3 steals in 32 minutes.

Spencer Dinwiddie continued his impressive play, posting a near triple-double with 20 points, 9 rebounds and 10 assists in 20 minutes. His poise and intelligent decision making is becoming a hallmark of his game when games get tight.

Timing and a feel for the game is getting Brooklyn home and he has done a terrific job in the absence of starting guards Jeremy Lin and D’Angelo Russell.

The Washington Wizards enter this match up after defeating the Orlando Magic 125-119 at Capital One Arena yesterday. Stars John Wall and Bradley Beal torched the Magic for 60 points on 25-38 shooting, hitting mid-range jumpers and getting to the cup at will. The biggest surprise however, was the play of big men Marcin Gortat and Ian Mahinmi. The Polish Hammer scored 12 points on 6-9 shooting while Mahinmi punished Orlando inside for a season high 17 points (7-8 shooting), 8 rebounds and 3 blocks in 21 minutes.

Second nights of back to backs haven’t exactly been kind to Brooklyn. They are 1-6 on the season with their lone win coming against the Cleveland Cavaliers in October. The Wiz fair a little better, holding a 3-2 record on back to back games this year.

Kenny Atkinson’s men continue to fire away from deep, throwing up 34 attempts per game (2nd). The problem is Brooklyn is only connecting at a 35 percent rate, good enough for 27th in the league. With the Nets persisting with this style of play, they must be at their best against Washington.

The Wizards are the leagues best at defending the three point line. They limit teams to just 33.6 percent shooting from deep, using length and strong close outs to affect shots from range. Washington rely on efficiency from distance, shooting an impressive 36.8 percent (8th) on just 26.1 shots per game (26.1).

Brooklyn ranks 8th in the league in three point defense, allowing teams to shoot 35.2 percent from deep. They will need to lean heavily on their perimeter defense to contain a Washington offense that can get hot in a hurry.

Beal and Wall drive the 11th ranked offense (106.8) but its Otto Porter who is the X-Factor for the Wiz. Porter is 8th in the league in three point percentage, shooting a potent 44 percent on four attempts per game.

His efficiency from range is attributed to his high IQ on the offensive end. He takes his shots within the offense and rarely forces the issue despite being the best shooter on the roster. Porter excels in Washington’s motion offense and regularly moves into vacant spaces for good looks. He is also able to drive to the cup, pull up from mid-range and cut to the basket.

Porter has really developed himself into a legitimate threat all over the floor thus the Nets will need to keep a body on him at all times. If Porter gets hot, it could be curtains for Brooklyn early on.

The Nets need to show a sense of urgency holding the ball. With turnovers comes unbalanced defenses, particularly in transition. While the Wiz only average 11.2 fast break points per game (13th), weapons like Wall, Beal, Porter and Oubre will make you pay.