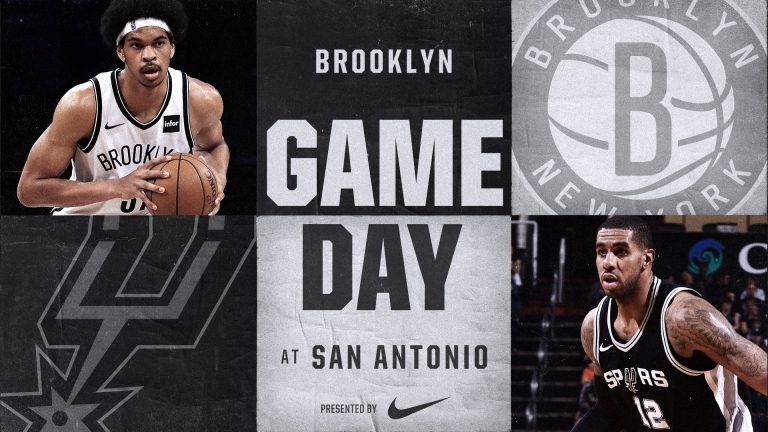 The Brooklyn Nets return to the road after a brief holiday hiatus, to take on the San Antonio Spurs. Beating a 23-11 Spurs team will be quite a feat for the 12-20 Nets, and it could certainly be considered a late Christmas gift to Nets fans if they accomplish this.

The Nets have not exactly fared well against San Antonio, let alone in San Antonio. As a franchise (New York Nets, New Jersey Nets and Brooklyn Nets combined), the Nets boast a 21-68 record against the Spurs. Brooklyn also comes into this contest having lost 14 straight games to the Spurs in the AT&T Center. Essentially, it would be one for the books if the Nets emerge victorious in this contest.

This game is the first of two meetings between the two teams, with the second to come in mid-January. Both teams stand at near-opposite ends of the spectrum. The Spurs sit in third place in the Western Conference and are coming off a win against the Sacramento Kings, while the Nets are in 11th place in the Eastern Conference and are coming off a loss to the Indiana Pacers.

The Nets wasted no time a week before Christmas to immediately replace the waived Yakuba Ouattara  (who was on a two-way contract with the team) with Milton Doyle. Prior to joining the team, Doyle showcased a variety of skills with the club’s G League affiliate, the Long Island Nets. The 24-year-old played 19 games with Long Island (18 of which he started) and posted 21.8 points, 5.8 rebounds, 3.8 assists and 1.5 steals in 34.8 minutes per game. Considering Brooklyn’s shortage of guards with D’Angelo Russell still out and Isaiah Whitehead bouncing around the home club and G League affiliate as well, it would not hurt to bring Doyle onboard. He has not played yet, though.

Doyle has technically been active for Brooklyn’s last three games, but was not played by Kenny Atkinson. If the game gets out of control rather quickly, I anticipate the Loyola product getting some time to shine. Even without that happening, however, midseason newcomers sitting out for the first three contests seems to be the sweet spot for Atkinson. Exhibits A and B: Jahlil Okafor and Nik Stauskas (discounting the Mexico City matchup against the Thunder since it would have been impossible for them to make it over there in time).

Kawhi Leonard could be back, but will he be in a limited role?

Spurs star Kawhi Leonard has missed a whole lot of games this season — you can count how many he has played on one hand — and only very recently made his season debut (December 12 against the Dallas Mavericks). Since then, “The Claw” has rested in a couple of games that were part of back-to-back sets.

Entering Tuesday, Leonard is ruled as probable against the Nets, though knowing the Spurs (the Nets learn from the very best), they will continue to ease him back into the rotation. San Antonio will not want to rush the 26-year-old to play his usual 30+ minutes a night until he is back in full health, so it would not be surprising to see him play limited minutes against Brooklyn.

In Leonard’s absence, LaMarcus Aldridge has helped the franchise retain its storied success, as the power forward is posting his highest totals so far in his three-year stint with San Antonio. Aldridge leads the team in points (22.2) and rebounds (8.4) per game.

The Nets went into the Christmas break off a back-to-back set — and now return from the break with another back-to-back set. After facing the Spurs in San Antonio on Tuesday night, Brooklyn will travel to the Smoothie King Center to take on the New Orleans Pelicans on Wednesday night.

Atkinson did not take “restful” approach for the previous back-to-back set before the holidays, though arguably both games were winnable. (The Nets blew out the Wizards in the first half of the back-to-back, then fell to the Pacers in overtime. Can’t get much closer than that.) However, the matchup on Tuesday being the Spurs changes the dynamics quite a lot. After all, Washington and Indiana are not ranked No. 3 in their conference and have not been a well-known powerhouse for decades.

Considering Wednesday’s matchup against the Pelicans might be closer within reach, it will be interesting to see whether Atkinson will still go all out with the players at his disposal. He did take a “restful” approach when the Nets had a back-to-back set in mid-December against the New York Knicks, then the Toronto Raptors, with DeMarre Carroll resting for the latter. Similarly to the Spurs, the Raptors are quite the powerhouse, so it would be understandable if some players do not suit up against San Antonio. The difference here is that the Raptors were the second of the two matchups in that back-to-back set.