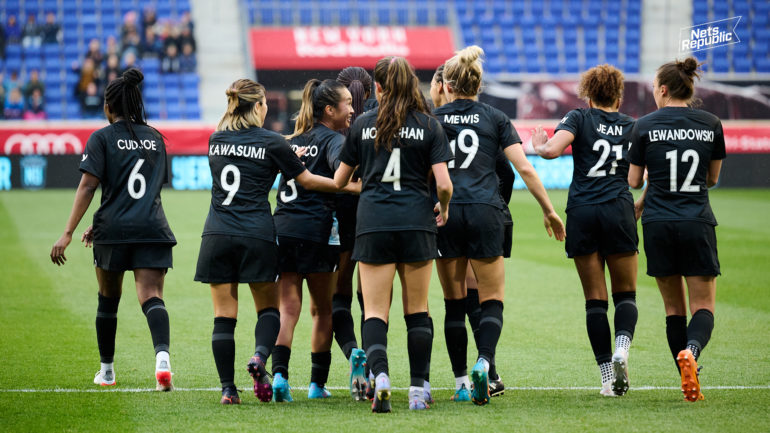 In what head coach Scott Parkinson would call a “gritty” performance, NJ/NY Gotham FC fought their way to at 1-1- draw against NC Courage on Sunday afternoon in Harrison, New Jersey.

“That was wild,” Parkinson said immediately after the game. “That felt as NWSL as any game I’ve ever coached in.”

The match, which became chippy at times, featured three yellow cards for Gotham FC and a few calls that Parkinson believed should have been penalties for his NJ/NY squad.

“I think Carolina felt like they had us on the ropes, but with Estelle [Johnson], Michelle [Betos], and Gina [Lewandowski], it’s hard to pull us out,” Parkinson said. “While we’re trying to find our feet and figure out ways to become ourselves, what I’m loving is the quality to hang into games, to stay alive in games, and give ourselves an opportunity to take things from games – and that’s got nothing to do with coaching. That’s got everything to do with the types of players that we have, in the city that we play in, and the community that we represent.”

After the game, Betos was able to reflect on getting her first start for Gotham FC at their first home game of the year.

“It was incredible, it’s honestly a lifelong dream come true,” Betos said. “To be playing in this big, beautiful stadium, to have the facilities we have, and to be in my backyard, growing up, it doesn’t get much better than that.”

Team Captain and midfield mainstay McCall Zerboni was unavailable for the match due to yellow card accumulation, giving rookie Taryn Torres the start, with Jennifer Cudjoe coming in off the bench in the second half.

The Courage opened the scoring in the 25th minute with a free kick earned just outside the box. Debinha was able to curve the ball over the wall and past Betos’s outstretched hand at the far post.

“I don’t think I’ve given up a goal in my life where I don’t think there’s something better I can do. I’m going to sit and analyze it. I actually think I took a half step the wrong way to initiate,” Betos said. “Debinha is a class player who had a class finish.”

Much of the night featured a strong Courage attack, with 19 shots – seven on target- coming from the visitors. Quick thinking from center backs Johnson and Lewandowski proved pivotal throughout the match in preventing the Courage from running up the score.

Even with the concession of a goal in the first half, Betos made her mark on the team making six saves. With help from a goal-line clearance by last season’s Defender of the Year Caprice Dydasco and Gotham FC’s hallmark defense, the goalkeeper was able to keep the Courage’s goals to one.

Despite the onslaught of the Courage attack, Gotham FC was determined to make the most of their chances and appeared to have a burst of energy in the dying moments of the match.

After earning a corner kick in the 84th minute, Kristie Mewis served a perfectly placed ball into the box and Ifeoma Onumonu redirected it with her head into goal.

Of Gotham FC’s goals in open play so far, both have come within the last ten minutes of the match.

“There’s a never-say-die attitude where they just never quit, they never quit at anything,” Parkinson said of his team. “There’s just something about this group where they’re just never done.”

After the game, Onumonu attributed the team’s late resurgence to a pep talk from Mewis.

“We only need one chance, just look for that one chance, and when you get that one chance – finish,” Onumonu said. “I trust my teammates implicitly, so I think it was just having to switch the mentality and just believe that we’re going to get one right now is where it came from.”

For Gotham FC, finally being home after three games on the road also provided them with that extra energy to secure the tie.

“The fans and being at home is amazing. I think they really helped,” Onumonu said. “I love having the fans have our back.”

Although the score ended in a draw, Gotham FC’s come-from-behind goal to tie it up ended the game on a positive note, setting the stage for the club’s remaining two Challenge Cup matches.

“What I’ve said to the players is we have to capture that last 18 minutes, bottle it up, figure out what it was, what was said, what was done. Was it a tackle? Was it a bit of bravery? And then we need to pull that out every day in training,” Parkinson said.

Gotham FC now sits in third place in their eastern division, just one point off of second-place Washington Spirit and 3 points behind first-place NC Courage.

There is still work to be done, and Gotham FC is not looking to slow down. As Onumonu explained, the team is progressing every game, and working on integrating the new arrivals into their ranks.

“I think we have really good chemistry,” Onumonu said. “We’re a team that wants to have the ball, and we’re a team that needs to be cleaner on the ball. We have pretty much the same core as last year, but we’re all on the same page and I think that’s what helps.”

Gotham FC will have two more home games to try and win their group and make it to the semi-finals of the 2022 NWSL Challenge Cup. Their next match will be on April 17th at 3 PM ET and can be streamed on Paramount+.