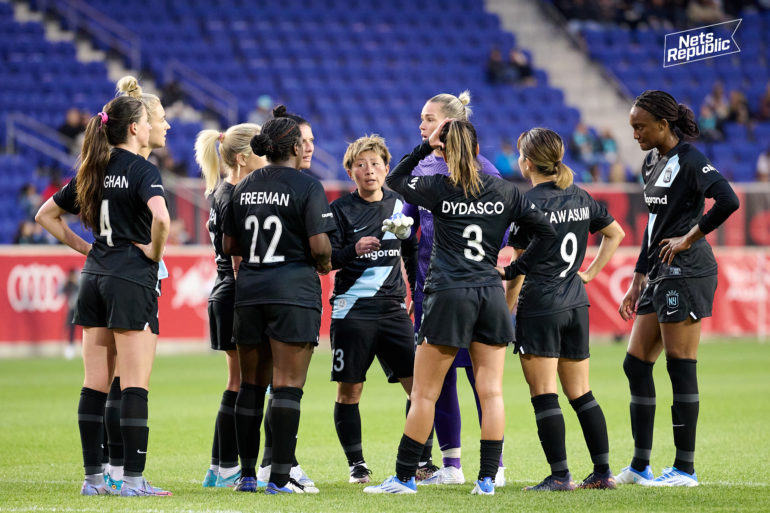 Gotham FC were routed 4-0 on the road in San Diego Saturday night — losing out to a Wave team motivated to put on a show for their first-ever regular season home opener.

A far cry from last week’s victory, Saturday’s game was one in which Gotham struggled on both sides of the ball. The NY/NJ side created very little going forward and were error-ridden at the back. It will be a match they’ll want to learn from, and then quickly forget.

“Have to give a lot of credit to San Diego,” head coach Scott Parkinson said following the match. “They were brilliant with what they do. On the first goal, we didn’t quite do enough to prevent it. And it was a big game [for San Diego] and a big crowd for their home opener and it gave them momentum.”

All four of San Diego’s goals came from Alex Morgan, who became just the third player in the league’s history to net four goals in the one match. She scored two from the spot and two from open play.

And though Margaret Purce started the game brightly, the chances she created caused the San Diego backline little trouble and Gotham’s energy was quickly snuffed out. The Wave disrupted Gotham’s outlet play out of the back, making it difficult to create any kind of rhythm. Gotham then relied on the long ball, but the forward line could never get on the same page in the final phase.

Conversely, San Diego looked a threat just about every time they made it into Gotham’s final third. The backline, along with Ashlyn Harris, did well in the first half to keep Gotham in the match. Estelle Johnson and Caprice Dydasco both made clearances off the goal line in the 21st and 37th minute, respectively. They nearly made it to half time unscathed, but an inadvertent handball in the box by Ifeoma Onumonu gave the Wave a penalty kick in the first minute of first-half stoppage time. Morgan converted.

Gotham’s struggles continued in the second half. In the 66th minute, the Wave converted a second penalty after McCall Zerboni tripped San Diego rookie Amirah Ali inside the box. Just four minutes later, Zerboni cut out a cross into Gotham’s box — but waited too long to clear the ball. She was dispossessed cleanly by Morgan, who turned and struck the ball far post.

Morgan delivered the death blow in the 91st minute following a poor backpass from Dydasco. Morgan pounced on it and finished over Harris.

Gotham finished the match with eight shots, four of which on target. Their expected goal (xG) plot — which looked like a heart flatlining — told the story of the match, with Gotham ending the night with an xG of 0.43. San Diego finished with 4.53 xG, which was certainly representative of their play.

The team will not be able to dwell on this loss for long with their own home-opener looming Saturday. They will face the newly minted NWSL Challenge Cup champions in North Carolina, who have proven to be a formidable side in the attack. Gotham have already played the Courage twice in Challenge Cup group play — recording a loss and a draw — and will hope to earn their first win against the side in 2022.

You can watch Gotham FC take on North Carolina Courage on Saturday, May 14 at Red Bull Arena. Tickets are available through Gotham FC’s website.