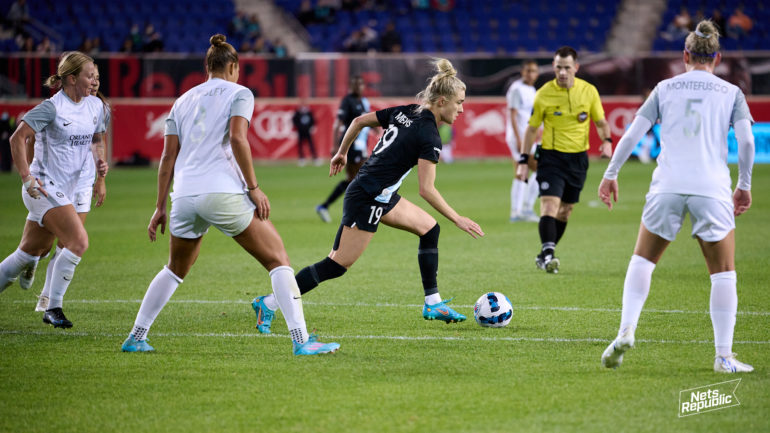 Gotham FC opened their 2022 regular season campaign with a victory away to the Orlando Pride Sunday night — scoring three goals and taking a big three points back to New Jersey.

Just a week prior, Gotham had drawn this Pride team 1-1 in their final Challenge Cup game at Red Bull Arena, despite having created the chances to win. On Sunday, Gotham were much more clinical. The team put the game away early, scoring all three goals in a span of 12 minutes in the first half.

Squad captain McCall Zerboni opened the scoring in the 29th minute. Kristie Mewis served a ball in from a corner kick, finding an unmarked Zerboni at the edge of the six-yard box who was then able to head it home.

Gotham were able to quickly capitalize on a deflated Orlando defense, netting their second goal just a minute later. From a throw-in in their own end, Imani Dorsey then launched a ball over the top of Orlando’s backline to initiate the break for an awaiting Margaret Purce. Purce was able to beat a defender on the run to go 1v1 with Pride goalkeeper Erin McLeod, who stepped to Purce to cut down her options. But Purce took a sly touch away from goal to avoid McLeod, finishing on her left foot from a difficult angle.

Purce continued to be a menace for Orlando’s defense. In the 41st minute, the winger got endline and floated in a diagonal ball across the Pride’s 18-yard box. Making a late run into the box, Mewis was able to bring the ball down under her control, cut around a defender and drill a shot across goal into the right corner of the net.

With the job done in the first half, Gotham came out in the second 45 with a slightly altered mindset — sitting off the ball more and asking Orlando to try and break them down. There were one or two slightly nervy moments for Gotham, with Sydney Leroux coming into the match and posing a bit more of a threat. In the 82nd minute, Dorsey made an important tackle, getting a foot across Leroux to send the ball back to Ashlyn Harris as the Orlando striker was nearly in on goal. And, in the 87th minute, Angharad James had a well-taken strike from the top of the box, forcing a save out of Harris.

Ali Krieger put in a noteworthy effort in her defensive end, making 12 total clearances and helping her team keep a clean sheet. Her performance earned a Player of the Match designation.

“It’s probably the first time I’ve said to the team all year that I expect goals, I expect three points. And I expect to take points back to New Jersey. And they did that. They delivered tonight,” Parkinson said, adding that being able to keep the clean sheet after going up big in the first half showed some improvement from his squad. “I remember being here last September, and we were three-nil up. And I said to the staff, ‘Wow, three-nil up, this will be a good lesson for us to manage this.’ I made some subs, and I didn’t do a good job as a first-year head coach in managing a three-nil lead on the road. And so I think we learned from that as a staff and as a team. We stayed really organized, we didn’t press as much. We tried to deny central spaces, we knew that we could get them out wide, and then we just have to defend crosses…And so although the second half might not look like the first one, it didn’t need to.”

The clinical first-half performance will bolster the squad’s confidence after six games of a Challenge Cup in which they struggled to score.

“Something that has been a theme in our play is that we haven’t been shooting and we haven’t been taking shots,” Purce said in diagnosing some of the team’s issues in the Challenge Cup. “And in the NWSL, you never know what’s gonna happen. And we have some really good finishers on our team. So [just taking more shots] was a big part of it, which I think lifted the energy and the mindset to go to goal.”

Mewis added that with this start to the season Gotham has started to play a bit more to their strengths.

“I think we tried a lot of things in the Challenge Cup: different people, different formations, different ways of playing, different ways of breaking the press. So … today obviously wasn’t about experimenting, it was about just getting the final product and doing what we think works best,” Mewis said.

Gotham will hope to keep this form up when they visit San Diego next Saturday. You can catch the game at 10 pm ET on Paramount+.