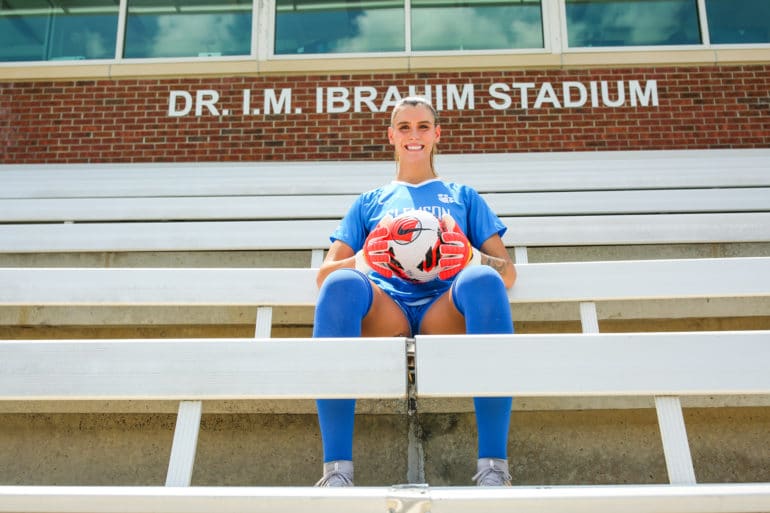 Going into the 2022 NWSL college draft, Hensley Hancuff had all these little connections to Gotham FC that made her selection by the New Jersey/New York club feel almost meant to be. There’s her shared Oklahoma youth soccer roots with the team’s head coach Scott Parkinson; her stint training with Gotham’s newly acquired keeper Ashlyn Harris; and that she is following in the footsteps of a certain other goalkeeper drafted by the club out of Clemson University. If you put the pieces together, it only seems right Hancuff is heading to Red Bull Arena to start her professional career.

But to suggest this outcome was somehow fated doesn’t diminish all of the hard work done and obstacles overcome for Hancuff to reach this moment. In videos shared to social media, you could see how much it all meant: after three hours of hearing other players’ names selected over the broadcast, Handcuff got the call from Parkinson that she’d be coming to Gotham, and tears of relief and satisfaction poured out of her.

“I screamed. I broke down into tears because this moment has been leading up basically my entire life,” Handcuff told Nets Republic in a recent interview. “It’s a hard feeling to describe because you feel like weights have been lifted off your shoulders, but at the same time now you have this pressure to go in and perform.”

Athletes will tell you all the time that this pressure is a privilege. It’s a gift to do what they do. But perhaps not many people appreciate the gift the way Hancuff does. In November of 2017, at 17 years old, after doctors identified tumors growing in her ovaries, Hancuff underwent a partial hysterectomy that later confirmed she’d had cancer.

“After the surgery, you wake up, and I mean, they say it’s worse than childbirth — the pain and everything,” said Hancuff. “It was such a traumatic time in my life. I was so young and so scared.”

The recovery process, she said, has taken years. She’s been in remission for four years, but only recently has she felt more like herself. In the intervening time, she’s had to deal with the physical and mental effects of the operation.

“Your body changes when you get your ovaries out. You stop making hormones. So you have to get on hormone supplements and find the right dosage,” she said. “I gained like 50 pounds during the process. I was super unfit. I was just not happy with my body and not happy with where I was.”

Working through that pain and change, she said, definitely has given her perspective.

“I was a crappy little teenager before [that],” said Hancuff. “I’ve learned a lot about understanding people … and at the end of the day, all we can do is be nice to each other.”

The experience also gave Hancuff clarity — clarity in what she wanted out of life and what she needed to do to get there. So, after two years at Villanova, Hancuff transferred to Clemson University in order to put herself in the best possible position to make it to the next level.

“I decided, I want to be a professional soccer player and that’s not going to happen for me if I stay here at Villanova, just because of the training environment,” she said. “Clemson welcomed me with open arms.”

Fighting for a spot

Clemson’s goalkeeper coach, Siri Mullinix, an Olympic silver medalist with the U.S. women’s national team in 2000, had long had a sense of the 6’3” goalkeeper’s potential, having tried to recruit Hancuff the first time around. But even so, and despite Hancuff having been the No. 1 at Villanova, Mullinix said it wasn’t a given Hancuff would walk into a starting role. It was something she had to fight for, and in doing so had a standout year.

“We told her, ‘we think you have the potential, but there’s no guarantee [for playing time]’ — and I think that’s kind of how we operate,” said Mullinix. “So I think her junior year was her best year at Clemson. That’s really where we made most strides and progress in her game and found areas that she was good at — obviously in the air and just her presence.”

During that spring season, Hancuff led the ACC in save percentage (.843), tallying 59 saves total with a .79 goals-against average. Notably, Hancuff also came up with PK saves in shootouts against Rutgers and UCLA to help Clemson reach the elite eight of the NCAA tournament.

With Hancuff’s drive and ability to take criticism and apply it to her game, Mullinix sees a pathway for Hancuff to follow in the footsteps of her other former players and find success at the professional level. Of course, one of these such players is Kailen Sheridan, who was drafted by Gotham (then-Sky Blue) in 2017 and became perhaps the club’s most important player in the five years she wore the badge.

And with Sheridan making her way to the expansion side San Diego Wave, Hancuff sees the legacy Sheridan has left behind at Gotham as a level she can work toward.

“She’s been a great role model for me these two years at Clemson because it’s something that I was striving for,” said Hancuff, adding that she admires Sheridan’s communication on the pitch and her ability to play out of the back. “So coming into Gotham, the reputation that she left there – had you know nothing but respect and love, and that’s kind of what I want to pick up from.”

When she reports to Gotham for pre-season, it will be a reunion of sorts with both Coach Parkinson and the newly acquired Ashlyn Harris.

“I’ve known Hensley for 9 years. She was in the same youth club that I was a coach at when she was a young kid in Oklahoma,” Parkinson told Nets Republic. “So, I know a lot about her work ethic, desire to be the best, and a little of her background life as a kid and into an adult. I think the future is bright and I think she will bring so much energy and drive to training every day.”

Hancuff said she’s excited to get to work again with Parkinson again, as well as Harris, with whom she trained for a few months in 2017.

After being approached by Lloyd Yaxley, the Orlando Pride’s goalkeeper coach at the time, Hancuff moved down to Florida from August to November to train with the team.

“I really wasn’t expecting much. I was just like, I’ll be off to the side doing my own thing. But I was full-blown in the locker room with Marta, naked, singing Portuguese songs,” said Hancuff. “It was surreal.”

And although Hancuff was a teenager at the time, Harris wasn’t easy on her when she made mistakes.

“I remember my first day,  we were training together and —  excuse my language —  but I shanked the ball at her and she goes, ‘Get your f***ing shit together!’” Hancuff recalled, laughing. “I was terrified.”

The two, however, were able to establish a great training relationship, Hancuff said.

“The first time I see her, I’m gonna be like, ‘I have my shit together now.’”

With Harris coming into the side as the presumptive No. 1 for Gotham, Hancuff is back in the situation she found herself in when she transferred to Clemson: a newbie with no guarantee for playing time. But, according to Hancuff, she’s ready to embrace her rookie status.

“I’m actually excited to go in and be a scrub again,” she said. “A rookie is a nobody in the league, and I’m looking forward to that. I do the best when I have to prove myself.”

To see Hancuff and the rest of the Gotham FC squad in action next year, visit Gotham’s website for 2022 ticket information.