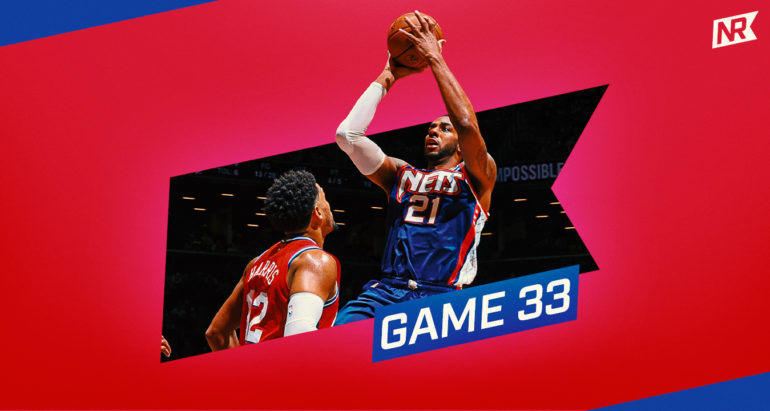 After a successful trip to Tinseltown which saw the Nets make Crypto.com arena their personal playground, the crew returned home to the east coast. Thursday night also saw the return of a few key players to the rotation, including superstar Kevin Durant.

The time off didn’t appear to phase Durant, taking the floor for the first time since December 16. His first three buckets came from three different levels on the floor. A three-pointer, followed by a dunk in transition, followed by a patented contested midrange hit. Nic Claxton also started the game with some pep in his step. On the very first possession, he blocked a Joel Embiid jumper and immediately followed it up with an offensive rebound leading to a putback.

Although the Nets shot 50 percent from the field and held Philadelphia to under 40 percent shooting, Brooklyn actually trailed for a majority of the first half. This was also surprising, seeing as how Brooklyn held an 11-rebound advantage at halftime. However, turnovers were the main issue as Brooklyn had 14 first-half turnovers to Philadelphia’s three.

As you’d expect from a tough divisional opponent it was a slugfest throughout most of the second half. No team could sustain momentum for long as the other side would have an answer. Kevin Durant (33 points, seven rebounds) gave Brooklyn its largest lead of the game (seven points) in the third quarter after connecting on a pair of triples. However, the Sixers would respond with a 15-4 extended run to close out the third quarter bleeding into the fourth. But Durant was there to help keep the Nets afloat.

In the back-and-forth affair, throughout the final period, the Sixers got some timely buckets from Tyrese Maxey, Georges Niang, and Seth Curry. They’d end the game on a 15-7 run spearheaded by Embiid, who was a dominant force all evening.

James Harden would connect on a pair of free throws to cut bring the Nets to within six with 40 seconds remaining, but Embiid showed why he is arguably the best center in the league, grabbing an offensive rebound over two Brooklyn defenders and scoring what would be the dagger.

Since returning from health and safety protocols, James Harden has looked like a brand-new player. Well, at least the player we saw last season. In the two games out in LA, he showed aggressiveness over apprehensiveness. That continued against the Sixers. From the jump, Harden attacked the basket. Even some soft whistles from the officials early didn’t stop Harden from getting to the cup. He’d connect on a layup, then a floater, and was on triple-double watch by the end of the first quarter with seven points, six rebounds, and four assists.

The Beard’s attacking mentality lasted the entirety of the game. In fact, all but one of his nine field goals were either layups or floaters. The difference in his approach is vastly different now compared to earlier in the year. Before, on the rare times Harden would drive to the basket, he’d look like a bull in a china shop, trying to bowl over defenders to force contact. Now Harden is driving with a purpose. And that purpose is to score, evidenced by how much he now uses his euro-step. Harden would finish with 33 points, 14 rebounds, and 10 assists. It’s his sixth 30-point triple-double as a Brooklyn Net. That mark is already the most in franchise history.

As pointed out not only by me but other Nets Republic writers, an aggressive Harden is a good Harden. It not only opens up the game for him but also his teammates, who either get the benefit of easy backdoor lobs or wide open three-point attempts.

Stop me if you’ve heard this one before: “How will the Nets handle Joel Embiid in the playoffs?” Well, the obvious answer is that three superstars trump one. But Thursday evening, Embiid reminded the Nets why they need to worry about him. The multi-time All-NBA center was in his bag early against Brooklyn. He dropped 16 of his team-high 34 points in the opening frame and anyone could see it was going to be a looooong night for LaMarcus Aldridge, who was also making his return from health and safety protocols.

Embiid did most of his damage in the first half from the perimeter, even knocking down a pair of threes. By halftime, the Sixers big man had 22. Embiid wasn’t as dominant in the second half but came up big when Philly needed him. With just over three minutes left Embiid would connect on a three-point play to give the Sixers a 100-97 lead. Then a few minutes later he shut the door on any hope of a Nets comeback with the aforementioned dagger offensive rebound and putback.

Embiid wasn’t the only Sixers center that gave Brooklyn fits all night. Andre Drummond provided some excellent minutes for his team dropping 10 points and 10 rebounds in just 16 minutes of play. Although the Nets did win the rebounding battle (52-43), they attempted 19 fewer shots than the Sixers. And the rebounds that the Sixers were grabbing were timely, such as the Matisse Thybulle board that led to a Tyrese Maxey corner three.

On paper, the Nets likely have the talent edge over the Sixers, even if Ben Simmons were to suit up for them again in a 7-game series. However, the Nets need to have a more concerted effort on the boards and limit turnovers against teams that possess the size that the Sixers have.

When Kyrie returns, the Nets can afford to have off nights from their role guys and bench because there will be three superstars to pick up the slack. However, it’s still a concerning sign when the support guys don’t show up. The Brooklyn bench could only muster nine points compared to Philadelphia’s 19.

Patty Mills had a rare off night only scoring five points on two-of-10 shooting. His poor performance was exacerbated by the fact Tyrese Maxey was having a stellar night in his own right. The young Sixers guard came up huge with 25 points on 10/18 shooting, with eight of his points in the fourth. Nets fans have gotten used to Mills’ timely threes all night, but they wren’t falling last night. Seth Curry (17 points) and Georges Niang also stepped up when Philly needed them.

Nic Claxton was the only non-star Nets player to really have a solid outing, providing some energy-inducing dunks on offense and displaying his elite switching ability on defense.