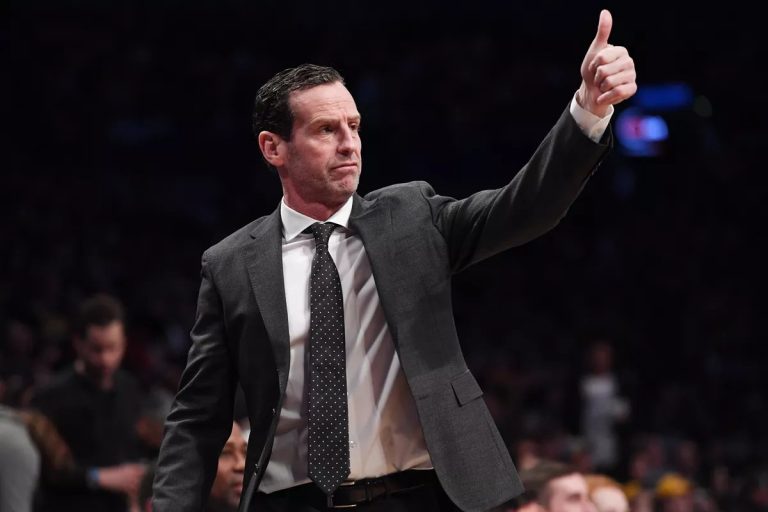 Coach Profile: The Good and Bad of Kenny Atkinson Part 2

Last week we delved into Kenny Atkinson of the Brooklyn Nets. We looked at his rotations, the praise he’s garnered from current coaches and how he’s developed the current roster. This time around we’re going to look at how he’s implemented his offensive and defensive principles and his coaching in the clutch.

It’s a modern way of playing basketball but with the current roster makeup is it the right one? The Nets didn’t have amazing perimeter shooters last season outside of Harris, Crabbe, and Carroll. For Kenny’s system to operate at its fullest, they need a stretch big at the four or five. Brooklyn didn’t have one through the acquisition of Jared Dudley and the work being done by Jarrett Allen this offseason should help those needs somewhat.

At the same time, as was advocated by NetsDaily’s, Anthony Puccio, Atkinson will need to make adjustments according to the roster at his disposal. That’s not to say he should abandon his system entirely, rather make some tinkering of it as Puccio iterated.

“Nobody is saying abandon pace and space, but meeting in the middle might not be the worst thing for them.”

With better talent on the roster thanks to Sean Marks’ free agent moves, the coaching staff should be able to continue implementing their same principles while also emphasizing some of the team’s other strengths.

The Nets have been lauded for their effort on both sides of the floor but defense has been an area where their consistency has lacked more. While the Nets were the league’s worst at forcing opponent turnovers they were still scrappy and rugged when engaged. No player was more emblematic of that then utility Joe Harris.

Brooklyn’s pick and roll defense waxed and waned throughout last season. There were plenty of times where the center would sag back and allow the ball handler a heap of space to maneuver and get off a shot. As is the case in this occasion with Jarrett Allen.

It’s hard to tell whether Allen is being instructed to guard the pick and roll like that or it’s a lack of awareness and experience. You’d expect it to be more of the latter. That’s not to say the team was awful at defending one of the game’s most common plays. They were 21st in effective field goal percentage allowed (46.9%) even with the lack of defensive talent they had outside of rookie Jarrett Allen.

The coach himself isn’t satisfied either as he told reporters just a few days ago regarding the team’s defense.

“I think defense is an area where we’ve kind of stayed at the same level rankings-wise with our defense over the first two seasons. I’d like to take a jump and improve that area… It starts with individual improvement… They have to make individual jumps, and then collectively as a staff, we can improve on better schemes, more adjustments. We have to provide the schemes that allow these guys to be put in positions to be successful.”

It’s early days so far as coach Kenny Atkinson looks to establish himself as a defensive and offensive mastermind thought the early signs are good. If what he’s preaching turns out to be a reality then he and the team will make jumps on both sides of the floor.

To say the Nets were a poor time in the closing minutes of games would be an understatement. Brooklyn had the 4th worst net rating (-10.9) in terms of clutch play and wasn’t much better (5th worst) when it came to clutch win percentage (.343). How much of that has to do with the coach and how much should be attributed to the players? It’s clearly a bit of both.

The talent at coach Kenny Atkinson disposal the past 2 seasons hasn’t been elite, forcing him to dip into his bag of tricks when it comes to implementing quality plays in late game/quarter situations. Outside of Trevor Booker, only 2 players last season had an effective field goal percentage above 50%: Rondae Hollis-Jefferson (55.6%) and DeMarre Carroll (58.9%).

In a tight, hard-fought win over Minnesota, Carroll came up big in the clutch with a big three.

And then with another great play and awareness to draw a foul.

His maturity shone through in such situations where so many of the other Nets brigade would falter. In such plays, the onus is on the player to execute the coach’s plays and while for the most part, Brooklyn wasn’t able to do so. When they did it not only reflected well on the players but the coaching staff too.

Spencer Dinwiddie was given a large chunk of responsibility in clutch time. Outside of a few games, the guard was mostly ineffective. Despite playing the most amount of clutch minutes for the Nets last season, Dinwiddie (37.9 EFG%) was only better than Jarrett Allen (32.1 EFG%) and Quincy Acy (27.3 EFG%) in terms of effectiveness from the field.

In that instance, against the Raptors there was nothing Kenny Atkinson could do in terms of coming up with a specific play. It was more on Dinwiddie to make it happen and the wild shot just, unfortunately, didn’t go in.

Following Brooklyn’s final timeout against Boston, Atkinson called for a play that put the ball in Dinwiddie’s hands.

It wasn’t necessarily a groundbreaking play and the shot was only just missed by Spencer (and of course put back by Joe Harris). Such plays encompass the Nets clutch time effectiveness. Coach Kenny Atkinson will no doubt improve in that area with more talent at his disposal and that will allow the players themselves to execute at a higher rate.