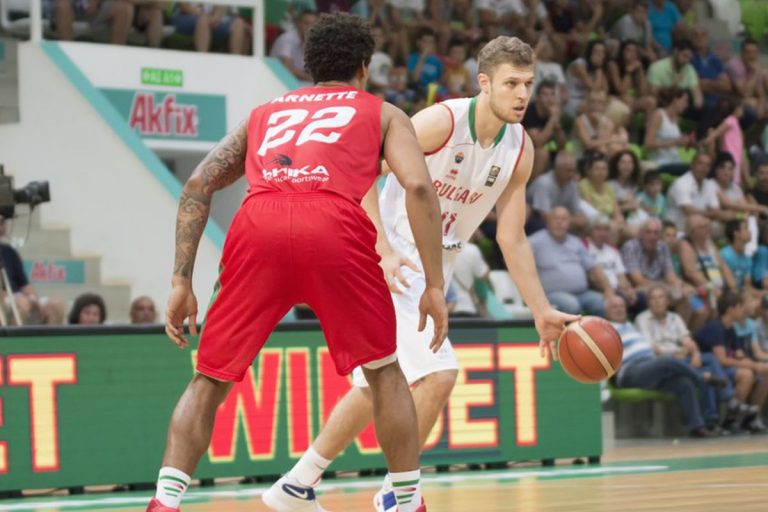 Aleksandar Vezenkov And Bulgaria Impresses Against Russia In FIBA Qualifiers

Not a lot of Nets fans have seen Aleksandar Vezenkov play a full game. Given how he fell out of grace with his head coach for his NBA aspirations, most people weren’t able to get a good look at what he can do on the court at a high level playing against some of the premier talents of the world. Luckily for everyone, Vezenkov joined his Bulgarian National Team and has given the world a look at what he can really do.

Vezenkov had an off shooting night against France earlier in the week, despite Bulgaria pulling out the big upset. That wasn’t the case on Sunday against Russia. Aleksandar Vezenkov proved to be one of the key contributors in a game that was tightly contested until the end and put up a big stat line of 22 points, 12 rebounds, and 3 assists.

A few things that struck me was how well he moved on the floor, both with and without the ball in his hands. Scouting reports pegged him to be a slow, tall shooter that isn’t reliable on defense but that simply doesn’t appear to be the case. He consistently and routinely got out in the fast break, ran the floor, and knew where to go on the floor to get into scoring position. In addition to that, he also looked great with the ball in his hands. For someone that is 6’9” and looks like a traditional power forward, he has good handles and is comfortable handling the ball in both the open floor and in the half court.

His handles helped him get assists but they also helped him drive the lane for layups. It is crucial for players that rely on their jumper for a bulk of their scoring output to be able to have something to fall back on for when the shot isn’t falling or defenses are playing tight perimeter defense. Vezenkov showed flashes of being able to create his own looks at the rim because of his handles. It is one area of his game that is still a little raw but if his performances against Russia and France are any indication, he is well on his way to being much more than just a shooter.

On defense, we saw some flashes of his potential. He played switches well, he didn’t foul and was very focused when playing away from the ball. Part of that is why he is such a good rebounder. Against Russia, we saw him switched onto the likes of Alexey Shved and other guards but Aleksandar Vezenkov didn’t flinch. He was able to contain them, force a pass, or make the opposing player take a shot that ended in a rebound for him and a possible fast break opportunity for Bulgaria.

His rebounding played a big role in this game, on both sides of the ball. When he wasn’t pulling down defensive rebounds to start fast breaks Vezenkov was following his own shot on offense. Two of his four offensive rebounds came off of his own shot, which he was able to convert into points and one of them he swung out to the perimeter to an open teammate.

The one thing that everyone knows he can do is shoot and we saw no shortage of that against Russia. He went 3/7 from deep and showed off his lightning-quick release and ability to hit big shots when needed. Vezenkov missed a few down the stretch but not badly. All of his attempts were pretty open and he never missed badly. His misses just rimmed out as opposed to going off the backboard or hitting the front of the rim.

One area of his game that he really needs to work on is developing another way to consistently score that isn’t from behind the three-point line. I mentioned earlier that Aleksandar Vezenkov had some success driving the lane but he is still a little raw. Traditional post-ups are not nearly as common as they once were in the NBA but they can still serve a big well. I would like to see Vezenkov work on his footwork in the low post and develop that a little more. It will only help him score off of offensive rebounds or whenever he isn’t on the three-point line.

One thing that especially stood out to me is how well everything Aleksandar Vezenkov does fits within Brooklyn’s system and current needs. He is tall, has a good body, and is a true stretch four player. He rebounds, he can handle the ball, he can do a little facilitating, he isn’t bad on defense, he can move on offense — often without the ball in his hands — and most importantly he shoots the ball well.

Aleksandar Vezenkov was freed from the personal purgatory that was Barcelona to join a David Blatt coached Olympiacos and signed a two-year contract. Vezenkov is surely going to come over to Brooklyn after the contract is up but if he plays well, which he is expected to do, don’t be shocked to see him on the 2019-20 roster. Brooklyn has proved that they are more than willing to negotiate buyouts for their European prospects and Vezenkov looks ready to blossom into the player he was supposed to be — sooner than later.