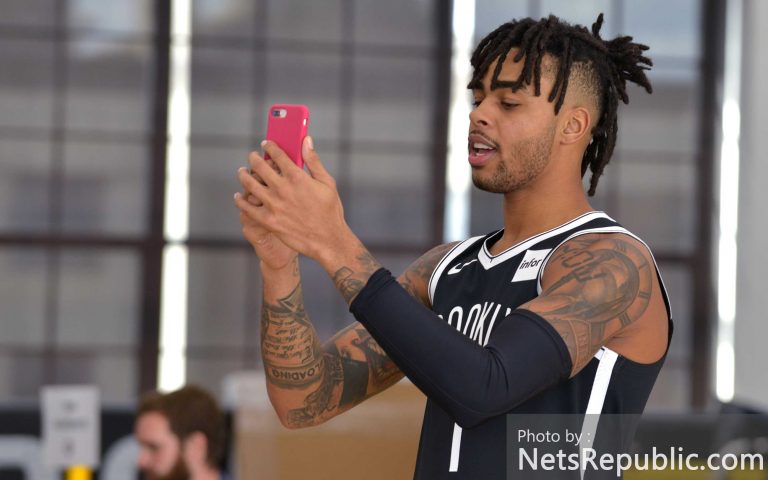 D’Angelo Russell: On His Time in Brooklyn and Future In Golden State

After months of free agency speculation, the Brooklyn Nets have signed Kyrie Irving and Kevin Durant, a pair of stars who have the potential to lead the Nets to a future championship.

But to get those two, the Nets had to give up their All-Star point guard, D’Angelo Russell, sending him to the Golden State Warriors in a sign-and-trade. On the surface, Russell’s skill set doesn’t seem like a great fit with the Warriors, but he’ll be able to bring them shooting and playmaking skills that will be especially useful while Klay Thompson recovers from an ACL tear.

Let’s take a look back at Russell’s time in Brooklyn and a look ahead at what he’ll provide for the Warriors.

Way back in 2015, the Los Angeles Lakers took D’Angelo Russell with the second overall pick in the NBA Draft. Then, two years later, they basically attached Russell as sweetener to get off the Timofey Mozgov deal, with the Lakers getting Brook Lopez (who had a great Nets tenure, but whose timeline didn’t fit with what Brooklyn’s timeline looked like at that point) and the draft rights to Kyle Kuzma.

Russell played 48 games in his first year as a Net, showing promising signs of progression but not quite looking like a future star. He was, probably, a good complementary piece at that point, maybe a guy who could be the first man off the bench for a good team.

And then, the 2018-2019 NBA season happened. Russell blossomed, making his first All-Star Game and making a statistical jump. He averaged 21.1 points per game and seven assists while seeing his shooting percentages spike as well.

Russell was also the key part of leading the Nets back to the playoffs. At the start of the year, it looked like a Caris LeVert-led Nets team was on their way to the postseason, but a devastating foot injury ended up costing LeVert most of his season. At that point, things looked bleak for the Nets. They didn’t have a star, and teams without stars don’t make the playoffs when they lose one of their best players.

But D’Angelo Russell took control of this team. In the 41 games stretch where LeVert was out, Russell scored 20.8 points per contest, shooting 37.4% from three and taking 18.5 shots per game. Russell wasn’t alone in willing this team to the playoffs — Spencer Dinwiddie, Joe Harris, Jarrett Allen, and a strong supporting cast helped — but he was the best player for most of the season on a team that got the sixth seed in the East.

And from a more sentimental standpoint, Russell changed the way people felt about the Brooklyn Nets. This franchise has had some rough moments since they traded their future away for Kevin Garnett and Paul Pierce, just a seemingly unending train of mediocrity and, at times, outright badness. The Nets had to watch as one of those picks they dealt landing first overall, though with hindsight being 20/20, not having that pick (since it became Markelle Fultz) was a good thing.

But Russell re-ignited the Nets fandom, giving them a young player with a lot of potential who was doing exciting things on the floor and helping them win games. Without Russell’s contributions last year and the Nets postseason run, do Kyrie and Durant even think about Brooklyn? Who knows.

How Russell and the Warriors Will Work

Now, let’s talk a little bit about D’Angelo Russell in Golden State. I watched a lot of D’Lo last season and wrote a lot about him, both positive and negative, so I wanted to tackle one last analytical thing about him before he officially heads to Golden State.

How is he going to fit in with this Warriors team?

Let’s look at some of the good and the bad about D’Angelo Russell and then talk about how he’ll work in Golden State.

How did Russell’s breakout campaign happen?

Offensively, he made his living in the midrange and in non-restricted area paint shots. Russell was actually fifth in the NBA in non-RA paint attempts per game, converting on 47.8% of them.

Russell basically does a lot of this:

Russell also saw a spike in his three-point shooting. Over his first three seasons, he shot a combined 34.4% from three on 5.4 attempts per game. Last year, he shot 36.9% on 7.8 attempts.

Russell’s most used playtype last year was the pick-and-roll, specifically the pick-and-roll with Jarrett Allen as the roller. Over and over, the Nets used that play to fuel their offense. But it wasn’t Russell’s best playtype. On 215 spot up possessions, Russell scored in the 82nd percentile, showing that he can work both on and off the ball.

D’Angelo Russell is also a skilled passer and playmaker. He was 14th in the NBA in assist points created last season, and his ability to read the defense and put the ball into the roller’s hands on a pick-and-roll or out to a shooter like Joe Harris on a kick out helped the Nets offense flow. Russell did have a tendency to narrow his vision when driving, though, as he passed the ball on just 25.4% of his drives. Of the other players in the top-20 in drives per game, only C.J. McCollum passed out a lower percentage of the time.

I wrote a whole piece earlier in the year about Russell’s abysmal free throw rate and how his hesitance to drive into the restricted area was a big part of why he didn’t get to the line.

To basically paraphrase all of that, because it’s my biggest question mark when it comes to Russell’s offensive game:

D’Angelo Russell is historically bad at getting to the free throw line. For players with the kind of usage rate that Russell has, pretty much no one is as bad at getting to the line as he is. If we sort every 30% usage season ever among seasons in which players played at least 1000 minutes, Russell has two of the three lowest seasons by free throw rate in the three-point era, and the number actually got worse between his first Nets season (third worst) and second Nets season (worst).

There are notable players who are just better than Russell, including Steph Curry and Kyrie Irving, but their seasons also featured elite three-point shooting, with them shooting over 40% from three in their seasons that were comparable to Russell’s. A point guard can struggle to get to the line when that point guard has such a stellar outside game that he doesn’t need to drive and get fouls. For comparable players who weren’t shooting 38% or better from the outside, we get Freeman Williams, Derrick Rose, and Dennis Schroder, which is a notably worse list to be on.

There’s also Russell’s defense. While not a total disaster on that end, he’s also not a plus defender. His D-PIPM last year was -0.8, which wasn’t great but also put him ahead of players like Spencer Dinwiddie and Kemba Walker. But he’s no Klay Thompson on that end of the floor.

Can Russell play beside Steph Curry?

The consensus around Twitter seems to be that this is a bad fit and…I’m not going to totally disagree with that. Russell and Curry playing together is a very weird fit and reminds me a lot of when Curry and Monta Ellis played together, a combination that was supposed to work and then just didn’t.

Russell can run an offense, but the Warriors work much better when Steph Curry runs the offense. (Obviously — he’s Steph Curry). If Golden State wants to try running the same offensive scheme they’ve run in the past, that means asking Russell to play the Klay Thompson role in the Warriors offense.

Meanwhile, the thing Russell did the most was run the pick-and-roll. Well, Thompson only logged 63 possessions as a pick-and-roll ball handler to Russell’s 920, so…clearly, there are some differences in the players.

If Russell does end up moving off ball more, he’s going to have to hope that Curry’s gravity draws defenses out and allows him to be a better three-point shooter. 5.9% of Russell’s shots were wide open threes, and he shot 50% on those. But when defenses closed in on him, he had to dribble inside the arc. On two-pointers from outside of 10 feet, Russell shot 46.2% when tightly guarded. But that’s not the Warriors game. They don’t use their two guard as a ball-handling driver. Klay Thompson wasn’t in the top-50 in drives per game last year. His 3.8 drives per game rank in between Marcus Morris and Rodions Kurucs. For Russell to play a Klay-like game, everything about D’Angelo Russell’s game has to change. Can it? Will he be effective if it changes? Will negating his best skills somehow end up being…a good thing?

The other option — which I’d buy if the Warriors weren’t already reportedly thinking of Russell as a short term investment, because I don’t see them changing their entire scheme for someone who isn’t there in the long run — is to do more of that Mike D’Antoni in Houston system of running more isolation plays through your two guards. Let Russell touch the ball more. Let him drive and kick. Let Curry work as an off-ball shooter at times, and Russell as an off-ball shooter at times, and just see what happens.

In theory, that sounds fine, but would the Warriors ever want to take the ball out of Curry’s hands? They were willing to do that more over the last three seasons with Kevin Durant in town, but if we look back to the last year of the OG Warriors, Klay was still coming off screens and spotting up. 12.1% of his possessions that year were in isolation or as the pick-and-roll ball handler, as opposed to 8.6% this past season. That difference doesn’t feel significant enough to suggest anything to me about a fundamental shift in play style, and as long as the Warriors view Russell as someone who is keeping the seat warm for Thompson, I wouldn’t expect a shift in style.

That really means it’s all up to Russell to improve as a shooter and embrace this role. I think there will be a few more drives per game where Russell gets the ball on the wing, puts it on the floor, and drives in for the floater, but overall I’d expect a good sized uptick in spot up and off screen plays. He’ll shoot better in this role, but he’s not an elite shooter like Thompson. It’s just…I don’t know, talent is important and D’Angelo Russell has talent, but fit matters too, and his entire offensive philosophy is the opposite of Klay’s. How will this work?

I will say that I don’t think this is the disaster people expect. Russell is a fine shooter, and his elite midrange shooting this year suggests that increased efficiency from deep can come from increased spacing. He’s not going to be DeMar DeRozan from three. Golden State will win games with Russell.

But at the same time, Russell’s best long term situation is going to come when a team who needs him to run the point makes a deal with the Warriors for him at some point. Let him get back to where he’s comfortable as a ball-handler.