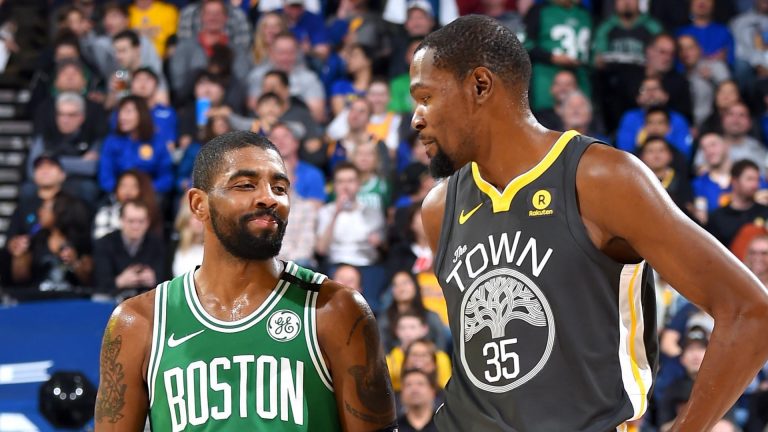 The Good, The Bad, The Kyrie

Kyrie Irving is on his way to Brooklyn. It’s something that had seemed like a done deal for days but was officially reported late Sunday afternoon. The arrival of Irving not only brings a lot of hope but also some pessimism amongst Nets fans. Irving’s recently checkered past is no doubt an area of concern, and the main question will be which Kyrie Irving will be coming to Brooklyn?

No matter how you may view him personally, one can’t deny that Kyrie Irving is one of the most gifted basketball players in the league right now. Uncle Drew (Kyrie’s nickname for those who don’t know) has become a household name for his dribbling affluence and ability to score the basketball. If you’re playing a game of horse or 1-on-1 against him, you might as well quit before it starts. And let’s not even mention his finishing ability around the rim because it’s almost unhuman-like the way he can get the spins and angles off the backboard. He’s also a career 22ppg scorer and has averaged over 23ppg the previous three seasons. And if you’re worrying about his passing, he averaged 6.9 assists last season which was the highest of his career. Needless to say the Nets haven’t had many players of his caliber in team history.

It’s no secret about the dark clouds that surrounds Kyrie Irving. But the questioning narrative didn’t start just in Boston but could be traced back to his days in Cleveland. Yes, Kyrie hit the biggest shot in Cavaliers history which gave them their long-awaited title. However, the internal turmoil of him wanting to get out from under LeBron’s shadow was already set. This led the Cavs to trade him to Boston for Isaiah Thomas who had become a fan favorite in his own right in Bean Town. It was supposed to be the dream scenario for Irving too. Going to a team with bright young talent in Jaylen Brown and Jayson Tatum, a top tier head coach in Brad Stevens, brilliant GM in Danny Ainge, as well as having an All-Star teammate in Gordon Hayward. But that dream scenario quickly turned into a nightmare.

The Celtics made the playoffs in 2018 and let’s be honest, they overachieved. Nobody could have predicted their young core without Kyrie and Hayward would make it within a quarter of going to the NBA Finals. That being said, the return of Kyrie and Hayward, plus the departure of LeBron to L.A was supposed to all but guarantee the Celtics as the favorites out of the East. I mean, Kyrie must have thought the same thing too when he made his now infamous speech in front of Celtics fans before last season where he said: “If you guys will have me back, I plan on re-signing”.

But as previously said, this dream scenario quickly turned into a nightmare. The Celtics just looked off last season. The cohesion from the previous year seemed to have disappeared. It would come back at points but never for long. As the losses piled up for Boston so too it seemed did Kyrie’s frustration. In an article by ESPN writer Jackie MacMullan, Kyrie had been frustrated with teammates following a loss to the Miami Heat back in January when his younger teammates apparently were out late the night before the game in the middle of a back-to-back. Boston was blown out in that Heat game.

Later in January, Kyrie came out and said he actually called LeBron after a tough loss to the Magic, a game in which Kyrie could be seen arguing with Gordon Hayward and Brad Stevens after the buzzer. Irving said: “I had to call ‘Bron, and tell him I apologize for being that young player that wanted everything at his fingertips”. He would also go on to say “Going forward, I want to test these young guys, but I can’t do it publicly”. Well as we all saw as the season continued to progress that that wouldn’t be the case. The Celtics continued to just tread water until they were ultimately bounced out the playoffs in the second round. A series in which Irving was absolutely abysmal and all but solidified his departure from Boston.

Now with the arrival of Kyrie and Durant, it meant Brooklyn was parting ways with D’Angelo Russell. The young guard with ice in his veins quickly became a fan favorite on one of the more fun and exciting Nets teams in recent memory. What hurts the most about parting ways with Russell is the fact that for the first time it felt like Brooklyn had their own homegrown star. Obviously, he wasn’t drafted by Brooklyn, but after being all but exiled from the Lakers he was accepted with open arms by the Nets and their base. Last season he grew in ways both off and on the court. You could hear it in his interviews and could see it with his leadership on the floor. He was right there with the role players dancing on the bench cheering on his teammates.

If anything D’Angelo is most likely a big reason why Kyrie and KD chose to come to Brooklyn. Seeing the comradery and how a small but loyal fan base embraced a guy who had had his own problems in the public light. Russell, much like Kyrie is now, was seen as a locker room cancer. Someone who lost the trust of his team due to a leaked video. Yes, the circumstances of Kyrie’s situation are different than what Russell’s were but at the end of the day, they were both viewed negatively by NBA fans.

The jokes around “NBA Twitter” is that Kyrie is going to come to Brooklyn and destroy the chemistry and comradery that’s there like he did in Boston. And while yes, Irving did have a hand in the tumultuous situation in Boston, he wasn’t the sole reason. But maybe, just maybe, the culture and locker room situation in Brooklyn is exactly what Kyrie had been longing for. Remember he was traded to Boston. He didn’t choose them on his own accord.

Kyrie made the decision to come to Brooklyn which means he saw everything the organization had to offer from training facilities to coaching staffs to medical teams and more. It doesn’t hurt that the Nets were Irving’s favorite childhood team growing up in New Jersey. There’s also the fact that he has budding friendship with Spencer Dinwiddie, and the two even took a course together at Harvard last September. Dinwiddie was one of the big players in recruiting Kyrie to Brooklyn. Players around the league talk, and since Sean Marks took over, Brooklyn has always been talked about in a favorable light. Luis Scola, who had been with the team at the beginning of the Marks era even said: “Once they win, they will get everyone they want”. Well, they’ve come.

Now, are there risks to bringing in Kyrie over D’Angelo? Of course. Kyrie is four years older and has had a history of injury problems. Irving does dominate the ball more than Russell however that could partly be due to the offensive systems he was in the past few years. He did however, just have his best season in terms of assists. Kenny Atkinson is known as a point guard guru so if there’s any coach that could get the most out of Irving its Atkinson.

If the chips fall into place and the Nets get the “Good” Kyrie then they’ll have the superstar guard they’ve been longing for. However on the flip side if the Nets get the “Bad” Kyrie then it could be a déjà vu to the Deron Williams situation where the relationship turns sour after a few years. A big promising factor to keep in mind as to why it’s more likely the Nets get “good” Kyrie is the difference in the franchise. The ownership, front office and coaching staff are all different and in a much better place than they were five years ago. If Kyrie can help deliver a championship to the Nets, his childhood team, the narrative and public perception of him go from bad guy to lovable hero. At least everywhere but Boston.