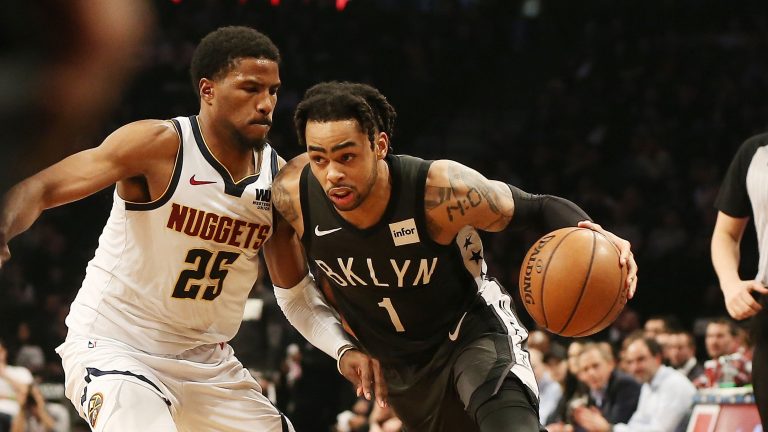 D’Angelo Russell has been a revelation this season for the Nets, but there’s been one area of Russell’s game that’s stuck out as an issue all season: his ability (or, rather, his inability) to get to the free throw line.

Russell has to figure this out. Let’s talk about why this is an issue and why he needs to get to the line to take the next step in his career.

Why doesn’t D’Angelo Russell get to the line?

Maybe the first question to ask is this: Why doesn’t D’Angelo Russell get to the free throw line? Russell is 20th in the NBA in field goal attempts per game, but his 2.4 free throw attempts per game are fewer than anyone else in the top 20 aside from Klay Thompson. Klay makes his living as a catch-and-shoot guy on the perimeter, though, so he makes sense. The only other player to take as many shots and have comparable issues getting to the line is C.J. McCollum, but that also makes sense since McCollum is the off-guard in Portland to Damian Lillard. Russell’s a point guard. Of those top 20 guys in field goal attempts per game, Russell is seventh in usage rate. McCollum and Thompson are 19th and 20th.

Clearly, something’s up here. No other player who has a usage rate of 30 percent or more has a lower free throw rate than Russell does this season. In fact, since the three-point line became a thing in 1979, D’Lo’s current season rates as the lowest free throw late by a 30% usage player, and his numbers from last season rate 247th out of 251. This isn’t an anomaly. D’Angelo Russell is really, really bad at getting to the free throw line, worse than any other high usage player has ever been. Even if we expand the search to guys with a 25 percent usage rate, Russell is second-worst this year to Klay Thompson and this current season ranks 1504th out of 1532 season since 1979.

For lack of a better phrase, that is not great.

But the deeper question is this: Why isn’t Russell getting to the line? What about his game prevents him from getting chances at the charity stripe?

Let’s start by looking at Russell’s shot chart and comparing it to the shot charts of some players who are better at getting to the line. All shot starts are taken from Basketball Reference. 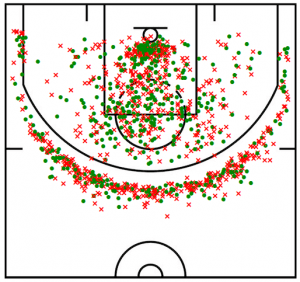 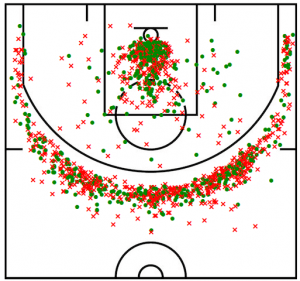 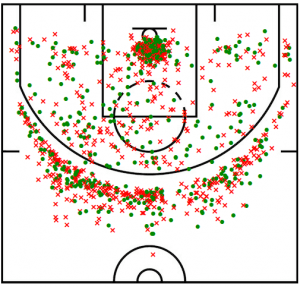 So, these three shot charts tell us a little bit of a story. The first thing I notice about James Harden’s is that it’s heavily concentrated in two areas — beyond the arc and at the basket. Harden gets a lot of his fouls through absorbing contact on the way to the bucket and a few of them from getting fouled while taking threes.

Lillard’s is a little more scattered, with a lot more midrange sprinkled in, but there’s still a heavily shaded section right there at the rim. He isn’t as aggressive as Harden is at drawing contact in the paint, though, and his free throw attempts per game reflect that. Stopping and shooting the midrange is a good way to not get fouled.

That seems…odd. It seems to be a universal truth at this point that the most efficient shots in the NBA are threes and shots at the rim, but Russell prefers to shoot the ball in the paint instead of finishing his drive and attempting a lay-up or dunk.

A big part of the issue here might be Russell’s finishing at the rim. He’s shooting 53.2 percent at the rim, a number that’s actually lower than his shooting from 10 to 16 feet. (In fact, of players to shoot at least 100 shots from 10 to 16 feet, Russell has the third-highest field goal percentage, so let’s not ignore that as a factor here. He’s really, really good from midrange.)

Among players to take at least 100 shots at the rim, Russell is 190th out of 195 in field goal percentage. That’s a problem. In fact, all this talk about Russell not getting to the line might be obscuring the real issue here: His finishing at the rim.

Russell doesn’t get to the line because the place where the most contact happens is at or near the rim, but because he’s a better midrange shooter than he is a finisher, he doesn’t finish his drives. Let’s go to the video!

Here, Russell comes around the Jarrett Allen screen and starts driving. But when the Miami defense collapses in on the drive, Russell pulls up from the edge of the paint. The shot clangs in, but it wasn’t what I’d call a great shot, and the decision to pull up from right there before he would have to make contact with a Heat defender prevents there from being any chance that this possession ends at the free throw line. I can imagine a version of this exact play that’s led by James Harden in which he keeps going and ends up at the line.

The Nets did score there, because Russell is a really good shooter from that part of the floor, but that doesn’t necessarily mean it was the right decision. Here’s another play from the same game:

Same kind of play. Jarrett Allen pick. Russell starts driving. But here, he’s got the Miami defender in a one-on-one situation. He could take it to the rim here and try to either A) attempt a shot from a place where it is easier to get a shot to go in from or B) get contact and get to the line. Instead, Russell sees a little bit of space and decides to pull up again. This time, the shot doesn’t go in.

Okay, but can Russell and the Nets be successful if he keeps not getting to the line?

This is the big question. Russell was an All-Star this year. The Nets are a feisty playoff team for the first time in a long time. Things are going well, so how bad is it that Russell isn’t getting to the line?

And that becomes a complicated question, because it’s hard to answer it right now.

We’ve seen teams win without their best player being a big “get to the line” guy. Steph Curry has had a free throw rate of under .252 for all but one season in his career. The Spurs won the 2014 title with both Tony Parker and Kawhi Leonard having low free throw rates. It’s not impossible for the Nets to win with Russell not getting to the line.

It makes it harder, though.

Free throws are an efficient way to score points and shots at the rim are also an efficient way to score points. A team needs guys who can do both things if they want to win. Having those two things packaged with a guy who can shoot from the perimeter and is one of the league’s best midrange shooters would be a blessing, and not having that isn’t going to kill them, but it adds pressure elsewhere. If your point guard can’t drive to the basket, then you need another ball-handling guard who can.

That’s where having Spencer Dinwiddie is very, very useful. Dinwiddie has a free throw rate of .417 this season, and he gives the Nets a ball-handling option that can get inside and get to the line. Dinwiddie is shooting 67.8 percent at the rim on 171 attempts; unlike Russell, his shot profile fits the modern three or at the rim mentality.

It would be great to see Russell improve his finishing, because that would help change his shot profile and get him to the line more, but if he doesn’t then Kenny Atkinson will have to figure out how to balance to delicate task of wanting the ball in Russell’s hands but also needing to get it into the hands of Dinwiddie, who can make more happen inside. That’ll be tough, but unless Russell can improve in the paint, he might need to become more of a catch-and-shoot guy, which is far from ideal considering Russell’s playmaking ability. Brooklyn’s best chance of winning with D’Lo is to try to get him more comfortable continuing those drives to the basket, getting to the rim and trying to make something happen once he’s there. He shouldn’t erase his midrange game to make that happen — he’s just too good at it — but maybe a few less runners from six feet would be a good start?