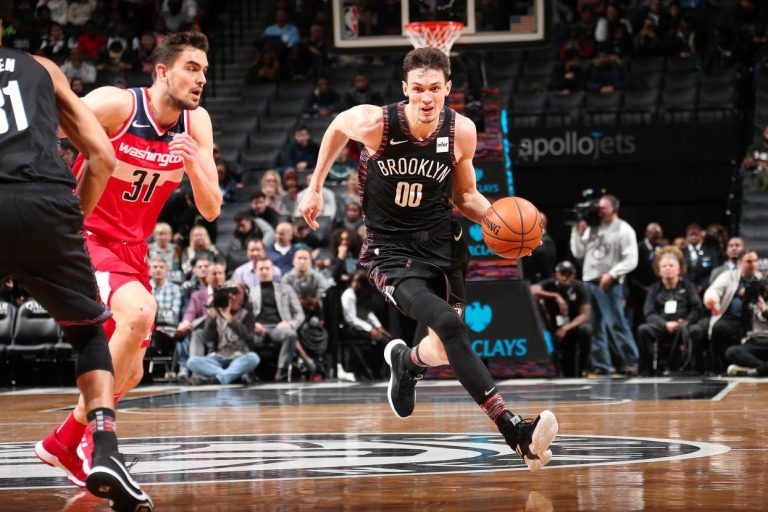 NEW YORK, NY -  DECEMBER 14: Rodions Kurucs #00 of the Brooklyn Nets handles the ball during the game against Tomas Satoransky #31 of the Washington Wizards on December 14, 2018 at Barclays Center in New York, NY. NOTE TO USER: User expressly acknowledges and agrees that, by downloading and or using this Photograph, user is consenting to the terms and conditions of the Getty Images License Agreement. Mandatory Copyright Notice: Copyright 2018 NBAE (Photo by Ned Dishman/NBAE via Getty Images)
Home
Brooklyn Nets
Justin Carter

Another week of Nets basketball is here and after some rough patches this season, things are looking up. Four games on the docket this week — the Lakers, the Bulls, the Pacers, and the Suns. Two of those games should be winnable, and you never know if the Lakers will stumble on the road.

I know there were a lot of differing opinions on how good the Lakers would be during the regular season this year. How has the team performed relative to your own expectations?

Heading into the season, I like most people, had legitimate concerns on how quickly the roster would acclimate themselves to each other and more specifically, to LeBron James.

After their initial 2-5 start, most of the general criticisms surrounding the team in terms of roster construction looked to be rearing its ugly head. Built up of the quote and quote “meme team,” the roster did not uphold what usual James’ led rosters looked like which helped build an early narrative in terms of the team’s upside that in all honesty, has yet to be fully shed despite their promising play.

There are no traditional “specialist marksmen” hovering around the perimeter when James drives into the paint like his former squads, but instead the 3-point line is made up of a variety of playmaking 6’5”-6’9” wings who do a little bit of everything.

Which up to this point, has worked out surprisingly well on defense, not offense. Currently allowing 107.5 points per 100 possessions according to Cleaning the Glass, the Lakers have the 10th best defense in the league, which was something almost no one could have predicted heading into the year.

Despite early suspensions, the tricky meshing of youth and veterans and the injuries, the Lakers are currently fourth in the Western Conference standings, which is far better than I and a lot of fans would have expected.

The Lakers have a lot of young players who are developing at different speeds. If/when the Lakers go after some veteran players in the trade market, how do you view those young players in terms of trade assets? Who nets you the most? Who would the Lakers be most unwilling to part with?

As with any fanbase, it is easy to overrate one’s young prospects. Which is also true for the Lakers, to an extent.

The team has the benefit of having four legitimate prospects that have flashed at least some semblances of starter caliber talent, and even higher potential considering how high one is on the individual players.

Although certainly debatable and fluid, the Lakers’ “A” prospects at the moment in terms of other front office’s eyes, are likely Lonzo Ball and Brandon Ingram, whom almost definitely will need to be involved in any notable star trade. The Lakers also have the advantage of having the mega-cost controlled value in Kyle Kuzma and Josh Hart, whose play have both far exceeded where they were selected in the draft.

In terms of who the team would be most hesitant to move on from, it would likely be either Ball or Kuzma. Ball, despite his poor offensive numbers, would be the ideal point guard to have in a starting lineup filled with multiple stars. He is extremely low-usage, consistently makes the right play and more importantly, plays defense. Kuzma’s recent play has been one of the most promising rises on the team, and if is something that continues, severely raises his upside. Kuzma was a surprisingly polished offensive rookie, but lacked in nearly every other ancillary skill. Of late, Kuzma has played shockingly sound defense, rebounded and has flashed playmaking upside. He is also been James’ favorite target on offense, often finding him on back door cuts and spotting up on the perimeter.

Who wins — Nets or Lakers?

The Lakers are coming off a rough loss to the Wizards and have done a solid job in corresponding contests. Yet, considering this one will be a home game for the Nets and continue to have solid guard play, the Lakers will definitely have some trouble if they head into this one with lackadaisical effort.

I still think the Lakers pull this one out, but this one should be a fun matchup.

Jabari Parker is reportedly no longer part of the Bulls rotation. How did you feel at the time about the Parker signing?

At the time, I wasn’t on board with the Jabari Parker signing and certainly am not now. Yes, Parker is putting up points and rebounds now, but it’s still coming at a high cost for Chicago. He’s still leaking points on defense and the offense hasn’t come efficiently either. 20 million is a lot to give a guy. Especially one who is coming off your bench and has major concerns on defense. Unlike the Dwyane Wade contract, this one doesn’t has a player option and the Bulls can opt out next summer. Either that or Jabari gets traded, after the demotion I really don’t think there is a year 2 of this experiment.

Does having Kris Dunn and Lauri Markkanen back change the rest-of-season outlook for this team much? They’re likely done in terms of playoff chances, but can they climb out of the cellar?

While it would certainly be against the tank for the Bulls to climb out of the cellar, there is a good chance that they do. This team was really bad without Dunn and Markkanen and with them back into the fold, Chicago should be a lot more competitive in games if anything. In terms of the rest of the season outlook, having Dunn and Markkanen back makes it a lot easier for us to evaluate the future of this team. Sadly, health hasn’t been on the Bulls side, especially with it’s younger players on this team. We haven’t really seen the Bulls play with a healthy squad and it affects how we can evaluate them moving forward. Hopefully both guys can stay on the court so we can get a glimpse of what Chicago’s future could be like.

Who wins — Nets or Bulls?

Nets win this one. Also shouts to former Bull Spencer Dinwiddie for the new contract.

Victor Oladipo’s return caught me a little off guard after hearing whispers he could be out a lot longer. I haven’t watched much Pacers basketball since he returned — how is he looking?

Victor Oladipo has gotten noticable better since returning from injury. He looks normal from a physical standpoint but he still appears to be working to get his rhythm back to what it was before he missed time. He hasn’t yet put together a game with efficient scoring from each level but he has done a better job of creating for his teammates. It looks as if he realized during his time on the sidelines that his teammates can be relied upon more for the scoring load. He seems to have a better understanding of where his guys like the ball and what they do best.

Can Myles Turner and Domantas Sabonis work when playing together on the floor?

I believe that Myles Turner and Domantas Sabonis can work together but it’s probably a matter of determining if that’s what is best to win in today’s NBA. Turner has to cover up Sabonis’ on-ball defense against stretch four’s and that lowers the overall defensive capabilities of the unit. They can definitely play well together offensively with Turner becoming a more efficient perimeter shooter as of late. Sabonis has done a good job of creating some baskets for Turner whether with post entry passes or just dishing it to him in rhythm going towards the basket. If Turner can keep knocking down 3-pointers, they can bully teams off switches if they can control the tempo. It can work but it’s definitely a different look on the flow in a variety of key areas.

Who wins — Nets or Pacers?

I believe that the Pacers will win this game. They have found tremendous success against the Eastern Conference and against teams below .500 so far this season. Without Caris LaVert, it will likely be challenging for Brooklyn to keep up with Indiana. The Pacers have been a hot team lately and I believe that will carry over into their matchup with Brooklyn.

Note: I asked Alessandro these questions, and then the Rivers trade happened and he tried to answer them with mention of Rivers being in Phoenix, and then Rivers was waived, so I’ve omitted some of his replies about how Rivers would fit in Phoenix from this.

Okay. The Suns and the quest for a point guard. With the understanding that this piece is publishing at the beginning of the week and things can change quickly in the NBA, what’s the most likely scenario in terms of the Suns acquiring a guard during the season? Will it happen? What pieces would need to be moved?

In my opinion, they’d eventually trade for a stopgap pg around January or February. They could use Daniels and Bender’s expirings + either Milwaukee’s protected pick or their 2019 second rounder to get an expiring guy who could potentially resign there, for example Cory Joseph.

Josh Jackson has had some good scoring games lately, though he hasn’t been particularly efficient while doing so. What are your thoughts on Jackson?

With the acquisition of Kelly Oubre, Josh Jackson’s role will probably be even smaller. As of now, he’s not consistent enough to be a rotation player in the NBA. His shot looks better (his hitch is almost gone) but it’s still inconsistent, he struggles at finishing at the basket and he constantly makes the wrong decision.

He makes the occasional flashy play defensively, but in general he has been underwhelming on that end, especially compared to what everyone thought he was supposed to be coming out of college. His lack of strength limits his potential as a switch defender: he’s far more comfortable guarding 1s and 2s rather than forwards.