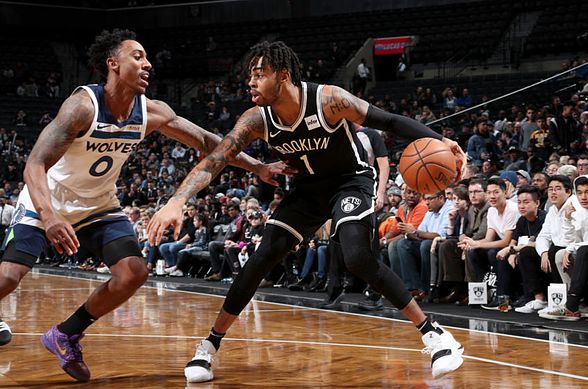 The last time the Brooklyn Nets lost a game, I was still in Texas, finishing up teaching for the semester. Now, I’m in Iowa visiting family, all my grades are turned in, and we’re nearing the two-week mark since that two-point loss to the Thunder.

A season that was starting to look a little hopeless after the LeVert injury now looks a little better. Sure, jumping into the playoff picture would be a challenge still, and sure, we can debate whether or not this team should be trying to win games at this point since they have control over their own first round pick for the first time in a long time, but that’s a discussion for another time.

Let’s look ahead to Tuesday’s meeting with the Los Angeles Lakers.

Y’all, the Nets set a franchise record for points scored at home in a non-overtime game in Sunday’s win over the Hawks. Eight players scored in double figures, and the Nets played well enough that they were able to empty the benches late and get Shabazz Napier and Kenneth Faried some minutes.

Brooklyn took 40 shots from three in the game, connecting on 16 of them for a 40 percent mark. The 40 attempts are six above Brooklyn’s season average, and it’s something that this team should look to keep doing.

What else was going right on Sunday? Passing. Brooklyn finished with 34 assists, far surpassing their season average of 23.1 per game. Saying that winning basketball games is as simple as passing the ball more is a huge oversimplification, but they are averaging 27.4 per game over this win streak, with a pair of 34 assist games in a row. Pass the ball and shoot threes…it’s a system that can work well for some of the personnel groupings this team puts out.

When you play against LeBron James, a key issue is figuring out how to slow down LeBron James. Last year, the Nets were 1-3 against the Cavaliers, but they were 1-0 when holding LeBron to under 30 points. While that’s an incredibly small sample size, it does suggest that you have to focus your defensive effort on slowing down James, which has been a tough task this year for teams.

James is scoring 27.7 points per game this season, his highest figure since the final season of his first Cavaliers season. But while the Lakers have a net rating of 10.2 at home with James on the court, that number drops to 2.5 on the road. Los Angeles is just 7-8 away from Staples Center this season. If the Nets can hound James and keep him looking like 2018 Road LeBron, they’ll have a chance to add to the winning streak, especially after the Lakers showed on Sunday that they’re beatable on this road trip with an 18-point loss to the Wizards.

Allen Crabbe has missed the past two games with a knee injury, and while rookie Rodions Kurucs has filled in nicely for him, Crabbe was on a bit of a hot streak before the injury, averaging 17.5 points per game on 48.8 percent shooting over a four game stretch. That could be useful in a game where the Nets will need to score points to keep up with a Lakers team that ranks ninth in the NBA in points per game. Sure, Crabbe doesn’t contribute much when it comes to passing the ball, but if the Nets wind up in a shoot-out with the Lakers, having Crabbe on the floor in crunch time would be a lot more useful than having Kurucs. (No offense to Rodions Kurucs, who is already good enough that I plan to invent a dumb nickname for him as soon as possible.)

Will Crabbe return, though? He’s listed as questionable for Tuesday’s game, and while we’ll get an update on that at some point on Tuesday, the best bet is to assume that the team plays it safe with him. That would leave the rotation looking a lot like the one that dominated the Hawks on Sunday, though the Lakers aren’t the Hawks. While the Lakers do allow 111.6 points per game, the Hawks allow a league-worst 119.3; Tuesday won’t offer the same soft defense that helped the Nets to Sunday’s 144 points, and there’s a good chance that Crabbe’s offense ends up being a thing the team is sorely missing.