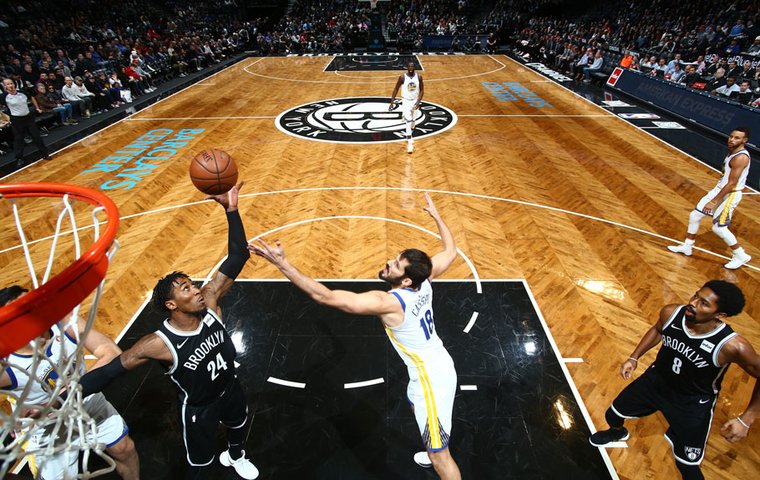 The Golden State Warriors could have been forgiven for laying down in a potential trap game against the Brooklyn Nets. Kevin Durant missed the game with an ankle injury, and the Warriors had just finished an exhausting game marked by an incredible comeback against the Philadelphia 76ers. Brooklyn, in turn, had a fantastic opportunity to take a game from the defending champions.

In the first half, the Warriors seemed to be ready to run the Nets out of the building. Golden State led 64-42 at halftime and controlled the game early in the third quarter. The Nets then proceeded to mount a remarkable comeback that unfortunately fell just short. While the Brooklyn Nets lost this game 118-111, this game may end up helping the team in the long run. Their impressive fortitude to challenge the Warriors after a tough first half may bode well for Brooklyn going forward. Here are some key takeaways from this contest.

The Brooklyn Nets have relied on a three-pointer heavy attack since the start of the Marks/Atkinson regime, and trailed for almost the entire game against a Warriors team whose defining characteristic is their three-point shooting. However, the Nets were the team with a three-point record in this game. The Nets looked to bomb from deep from the opening tip, and broke the team record with 48 three-point attempts in this contest. Brooklyn somehow took twice as many long-range shots as the Warriors did in this game.

The Nets were not exceptional from deep, making 33.3 percent of those attempts from long-range. However, they did not fare much better inside the arc, making just 38.3 percent of their two-point tries. Brooklyn’s numbers from long range also look far better if you can look past Joe Harris’ abysmal 1-of-8 night from beyond the arc. With D’Angelo Russell now out for an extended stretch to go along with Jeremy Lin’s injury absence, the Nets could think of far worse offensive strategies than trying to turn the three-point luck in their favor.

The outlook for this game appeared awfully bleak entering the locker room for halftime. Brooklyn trailed the Warriors by 22 points, and their offense appeared to be sleepwalking through the entire first half. That trend continued for the start of the third quarter, as the Warriors expanded their lead. Then, Brooklyn’s offense woke up, and the entire tone of the game changed after a crucial timeout from Kenny Atkinson.

The Golden State Warriors’ backcourt for this game featured a two-time MVP and an All-NBA shooting guard. The Brooklyn Nets’ backcourt featured two players who started the season on the bench and made this starting lineup due to injuries to the two players ahead of them. Thus, Nets fans could be forgiven for expecting the Warriors’ star-studded backcourt to run roughshod over their Brooklyn opponents.

While this game hinged on the performances of the two starting backcourts, Brooklyn’s guard duo held its own against the best backcourt in the league. Stephen Curry led the charge with 39 points, 11 rebounds and seven assists. However, Spencer Dinwiddie put up 21 points by relentlessly getting to the line and dished out eight assists of his own. Both guards got the other into foul trouble; Dinwiddie sat for much of the second quarter with three fouls and finished the night with five, while Curry picked up his sixth foul on a charge with three minutes left in the fourth quarter.

Meanwhile, Allen Crabbe effectively battled Klay Thompson to a standstill. Crabbe finished with 25 points and seven rebounds, while Thompson finished with 23 and 10. Crabbe led Brooklyn’s three-point shooting attack by making 6-of-11 from deep. Thompson, on the other hand, did not attempt a three-pointer until there were less than two minutes left in the game and did not attempt a free throw until late in the fourth quarter to ice the game. Despite being faced with nearly impossible odds, the Nets’ backcourt almost managed to match their opponents’ muster.

The Nets were down by 28 points (78-50) with 8:27 to go in the third quarter. They were playing a team that had used a ridiculous third quarter performance to spark a comeback from a 20-point halftime deficit–and that team had a 20-point lead going into the third quarter against the Nets. However, the Nets fought harder than anyone could have expected them to, and held the league’s best offense to just 20 points in the fourth quarter. They had the ball while down five points multiple times in the fourth quarter and fell just short of a potentially season-defining victory.

This game might not be a win for the Brooklyn Nets in the standings, but their ability to stage this big of a comeback against the league’s best team should be at least a moral victory. The Nets deserve a ton of credit for refusing to give up in this game, and hopefully this comeback can spark them to some real wins going forward.