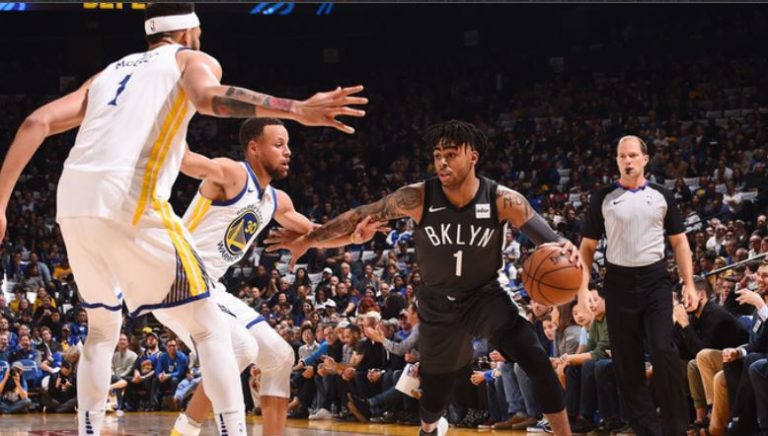 A true Jekyll and Hyde performance for both the Brooklyn Nets and Golden State Warriors. Brooklyn shot out to a 12-6 lead in the opening minutes of the game. Then, the Warriors waltzed into a 31-13 stretch entering the 2nd quarter. With the game hinting towards blowout status, the Nets peeled off fourteen unanswered points to close the point deficit to 4 by midway of the 2nd.

The Nets and Warriors then played each other tightly until 1:34 remained in the 3rd quarter of a 78-77 slugfest. From there, Golden State finally threw a haymaker of a 18-3 run into the early 4th quarter to keep Brooklyn at a distance for good. Phew!

Bring Back the Caffeinated Nets

As the dead-last ranked NBA team in opponent turnover rate via Basketball-Reference, the Brooklyn Nets do not tend to enjoy quite as many odd man fastbreaks as they’d wish. Against the infamously loose Warriors, Brooklyn got to finally feast more often in transition.

Brooklyn actually scored more points off turnovers than the legendary Golden State transition offense (28 to 20). This statistical victory occurred despite only winning the turnover margin by one. Furthermore, the Nets noticeably made concerted efforts to attack early in the shot clock to exploit inattention or lax defensive rotations.

The emphasis on pushing the pace even during inbounded possessions naturally led to a greater resemblance to the competitive Nets games of November and December. The Nets currently rank 6th in pace via Basketball-Reference with 98.8 possessions per regulation game. That standing still marks a significant drop-off from last year’s league-leading 101.3 pace.

The lack of relatively reliable half-court shot makers and shot creators on the Brooklyn Nets necessitate early offense against scrambling defenses to make up the talent gap. The Brooklyn offense, however, shows hints of prioritizing such strategy only when D’Angelo Russell runs the offense. It is imperative Spencer Dinwiddie and Caris LeVert learn to recognize opportunities for quick offense as well. Patience is a virtue only so often.

Spencer Dinwiddie had a much needed efficient night scoring 13 points on only 7 field goal attempts. However, Dinwiddie only putting up 7 field goal attempts has become a worrying trend. Since D’Angelo Russell returned to the starting lineup in mid-February, Dinwiddie has taken a noticeable backseat in the scoring load. The stepback of self-creation looks somewhat understandable when you see how cold Spencer has been.

Dinwiddie has been shooting 38 percent from the field and 28 percent from beyond the arc in the 2018 calendar year. However, a passive Dinwiddie makes for less shot opportunities for others. The poor shooting Nets need Dinwiddie drawing help defenders from the perimeter because of his slashing. And Dinwiddie will only draw that help if the defenders believe he’s a threat to score off those slashes. He can’t always dump off to Jarrett Allen or Dante Cunningham.