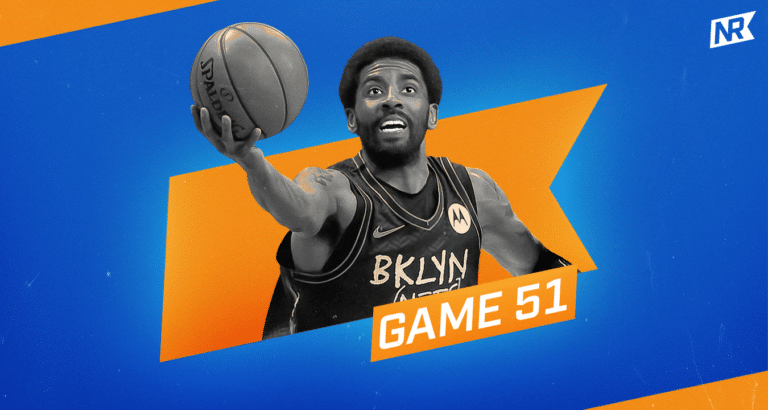 Brooklyn Nets: Three Takeaways From Nets’ Win in Battle of the Boroughs (4/5/2021)

The Brooklyn Nets entered Monday’s cross-river rivalry game against the New York Knicks coming off a lackluster performance against the Chicago Bulls. With James Harden leaving the game early due to injury, the already shorthanded Nets were still able to outlast a pesky Knicks squad, 114-112.

Here are three takeaways from Brooklyn’s nail-biting win over its crosstown rival:

The number of words to describe just how good Kyrie Irving is at basketball is only increasing. Coming off of a poor shooting performance the game before, you knew Irving would be locked in facing the Knicks. And locked in he was.

After Harden exited early in the first quarter with right hamstring tightness, Irving put the team and its already shorthanded roster on his back. With 23 first-half points, Irving accumulated his scoring in typical fashion: tough finishes in traffic, mesmerizing fadeaway jumpers, and mind-boggling acrobatic push shots.

With the Nets down as many as 14 points in the second half, Irving seemingly willed the Nets back with his play on both ends of the floor. He even had a breakaway dunk, which seemed to not only rejuvenate the crowd, but also his teammates.

That wasn’t the only highlight from the All-Star point guard. Irving also electrified the arena with an ankle-breaking move on Julius Randle that led to a 3-pointer. A few minutes later, he hit a huge step-aside three over Elfrid Payton that was eerily reminiscent of his shot over RJ Barrett last season.

Irving finished with 40 points and 7 assists, but don’t assume he solely showed out on offense. Defensively, Irving had one of his better outings of the season. He was active with his hands and even forced a key turnover late in the fourth by stripping Randle. With Brooklyn already without Landry Shamet and Tyler Johnson and Harden’s status up in the air, the Nets may need to have more of these performances from Irving until reinforcements arrive — namely, Kevin Durant.

A tall glass of Alize

Already becoming one of Nets fans’ favorite players, Alize Johnson showed that his performance against the Jazz a few games ago wasn’t just a flash of lightning. Johnson, who saw extended minutes Monday night due to all the injuries on the Nets roster, made the most of his time.

From the moment he checked in, Johnson made his presence felt with his activity on the boards and finishes around the rim. In the first half alone, Johnson had eight points and three rebounds in only seven minutes of action. During the second half, he also played a big role in Brooklyn’s 14-2 run toward the end of the third quarter to help erase a 14-point deficit. Johnson finished with 12 points and 7 rebounds and was a solid +11 in the plus/minus category.

The injury bug has reared its ugly head at an inopportune time for Brooklyn, but Johnson has shown in his brief playing time that he can provide some quality minutes for the Nets off the bench. Expect an increased role for Johnson over the next few games in the absence of Shamet and Tyler Johnson.

It’d be a disservice to not acknowledge how well the Nets’ reserve players performed, especially in the second half. With the absence of Harden, guys like Chris Chiozza and the aforementioned Alize Johnson were asked to step up and they answered the call. Players that normally see the floor in garbage time played crucial minutes for Brooklyn down the stretch. Even Timothé Luwawu-Cabarrot arguably made the play of the game by tipping a rebound to Jeff Green, which led to Green getting fouled. Green went on to sink the winning free throws.

Although the bench only combined for 27 points, it was the catalyst in Brooklyn’s comeback efforts. All bench players except Bruce Brown had positive plus/minus numbers as well.

Games like this remind you of the immense depth Brooklyn possesses, and that even against a playoff-bound team, it can still win with guys from the end of the bench playing extended minutes.