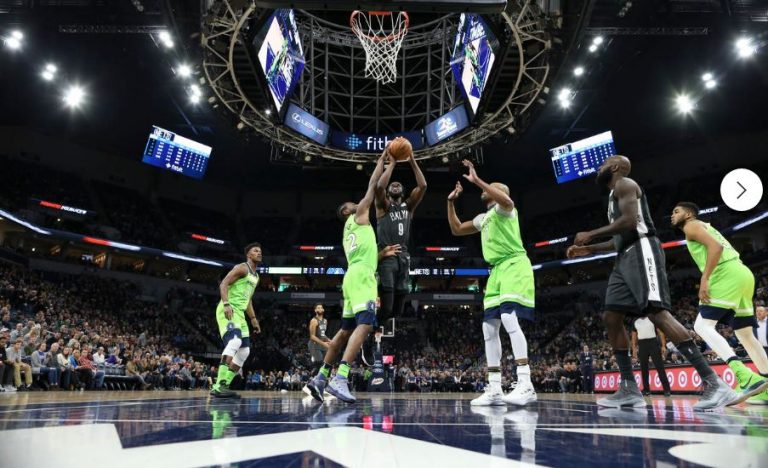 After a tough loss to the Milwaukee Bucks, the Brooklyn Nets hoped to recover some momentum against one of the top squads in the Western Conference. However, the Nets failed to recover any sort of momentum and did so in painful fashion. Allen Crabbe scored the first two points of the game, but Brooklyn quickly surrendered that lead in a crushing 111-97 loss.

With the Nets set to face the crosstown rival New York Knicks on Tuesday, the team will at least have time to steady the ship before their next game. However, the team let this contest slip away early in concerning fashion. While not all of the takeaways from this game were negative, this loss will sting more than the final score might indicate.

The Revenge of the Philadelphia 76ers

The Brooklyn Nets sent away fan favorite Trevor Booker to the Philadelphia 76ers, but got two recent lottery picks in return in the hopes that they could revive their careers with a second (or third) chance. Nik Stauskas poured in 15 points on 10 shots, including three triples. Jahlil Okafor was even more impressive–he led the team in scoring with 21 points on 9-14 shooting in only 23 minutes.

Stauskas has been a useful piece for the Nets so far, with a scorching 46.2 percent mark from beyond the arc in 17 games. Okafor, however, has played very limited minutes for the team even after missing time with conditioning issues. He also played an undeniable part in fellow 2015 draftee Karl-Anthony Towns‘ massive 19-rebound night (including 10 on the offensive glass). However, a strong offensive performance like this from Okafor is good to see–and is a sign of what he can do when he puts it all together.

The Craft of Jimmy Butler

The Brooklyn Nets managed to hold Jimmy Butler to a miserable 4-14 night from the floor. While Butler did contribute across the board with lockdown defense and solid passing, holding him to a poor shooting night like that is usually a good sign for any team. However, Butler still managed to find his way to score against the Nets, forcing his way to the free throw line en route to 12 FTA’s and 21 points.

Butler is a dark horse MVP candidate in many eyes, and his performance against the Nets in part encapsulated his exceptional level of play this year. It is no coincidence that the Timberwolves passed their win total from last season with this game while still having thirty games left to go. This is a dramatically different Minnesota squad than what we have seen in the past, and the vast majority of that change is due to their best player.

Starting off on the worst possible footing

The Brooklyn Nets were only outscored by two points in the second half. The Nets even managed to outscore the Timberwolves by seven points in the second quarter. This game was entirely won (and lost, in the case of the Nets) during the first quarter. The Timberwolves racked up 30 points on a helpless Brooklyn team. The Nets managed only 11 points of their own in an abysmal period on both ends of the floor.

The Nets took their last lead of the game on a Quincy Acy triple that made it 7-6 in Brooklyn’s favor. Brooklyn scored just four points in the remaining 9:11 of the first quarter. They scored their final points at the 2:43 mark. Brooklyn then allowed a 10-0 Minnesota run for the remainder of the period. While the final score showed a double-digit loss indicating that this game was comfortably in Minnesota’s hands the entire night, even that double-digit margin does not quite show the painful nature of a game where the Nets were without much hope from close to the opening tip.

The Brooklyn Nets get two days off until their next game Tuesday as they remain on the road to face cross-town rivals the Knicks.