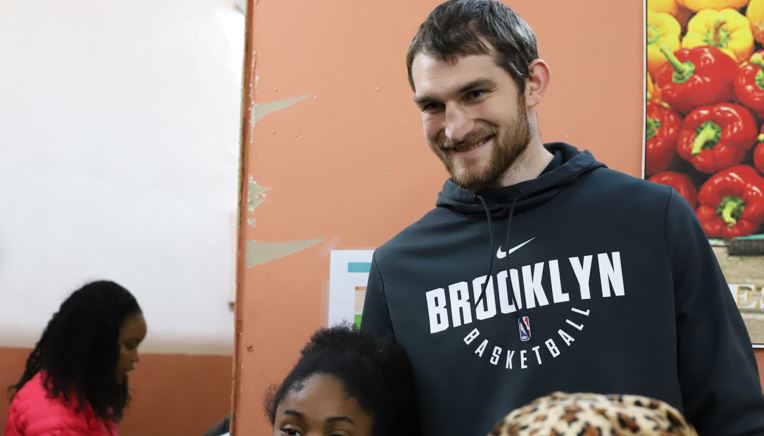 After a 2016-2017 campaign that saw Tyler Zeller produce the worst numbers of his career, the former Tar Heel is experiencing a mini-resurgence in Brooklyn, and has given the team some new wrinkles offensively. His impact on the team may be subtle, but his pseudo-revival has been anything but.

Although not originally known for his skill offensively, Tyler Zeller has developed into a key piece on that side of the ball. Like many before him, Zeller has been able to flash new dimensions of his game with an expanded role within the Nets’ system.

Throughout the first half of the season, Tyler Zeller has not only hit mid-range jumpers with near career-high accuracy, but has even expanded his range to the three-point arc where he’s draining 37.5 percent of his attempts (albeit on .6 attempts per game).  Zeller’s goal should be to maintain this efficiency into the second half as this new weapon is adding versatility and benefits to his overall offense.

With defenses forced to respect his outside shot, Zeller has exploited space not before available to him. Watch how he attacks a hard close-out to convert a tough shot at the basket:

While these types of plays still happen infrequently, the space to make them would have never been afforded to Zeller in the past, so now it is, it’ll be interesting to see how he uses it in the second half.

Fit in the Nets’ Offense

For as much as Zeller has improved his individual play thus far in 2018, the system he’s playing in arguably deserves more credit for his transformation into an offensive weapon. Most systems would relegate Zeller to the paint or on the periphery, but Brooklyn positions the former Tar Heel to roam and exploit gaps in the defense. For example, in the play below, watch how Zeller finds just enough space to position himself for an easy finish:

These kinds of plays happen regularly during Nets games, and even if he doesn’t always get the ball, the space he creates certainly helps. Given his relatively low usage rate (18 percent) and his shooting efficiency (54.4 field goal percent), it’s no wonder he’s found a spot in the Brooklyn offense.

Despite Zeller’s transformation offensively, his defensive woes remain fully intact. Throughout his career, he’s been outmuscled by big forwards in the paint. Moreover, he gets exploited by smaller guards on the perimeter, and this year is no exception.

Like many older bigs around the league, Zeller frequently finds himself scrambling on the perimeter. Zeller tries (and mostly fails) to cover the stretch bigs of the modern era.  Zeller looked like a deer on skates whenever tasked with defending notoriously slow players. Specifically, bigs like Nikola Jokic and Pau Gasol on the perimeter.

Watch enough film and it’s easy to see why Zeller struggles. He consistently finds himself struggling to recover against players like Jokic and Gasol whose mobility is comparable to that of a zamboni. In this play below, watch how Zeller covers Nikola Jokic, a career 49.8 percent shooter from 16 feet to the three point line:

The more damning aspect of his defense of players from this archetype, is how he chooses to recover. In the play below, watch how sloppily Zeller closes out on Pau Gasol after a slight shot fake:

No one is asking Tyler Zeller to be able to consistently defend a player of Jokic’s ilk. But, his effort level in that regard has been unacceptable thus far.

The issue with using Zeller as the lone big lies in the type of ineptitude defending forwards he has displayed. Although he can occasionally hold his own versus the Nikola Jokic’s and Karl Anthony-Towns’ of the world, athletic bigs like Hassan Whiteside and Andre Drummond consistently overpower him with ease.

Similarly to his coverage of stretch bigs on the perimeter, Zeller sags back and allows more traditional big men to get a full head of steam heading to the basket, and puts himself in an unwinnable position.

Theoretically at age 28, Zeller should be at or near the peak of his athletic and physical prime. But, this season, Zeller has frequently looked like someone twice his age when defending big men.

Zeller has proven to be a solid role player for a surprisingly competent team in the Eastern Conference. The big question is whether he can carry that momentum through the second half of the season. More importantly can he still grow and improve his tool kit. If his offensive resurgence continues the Brooklyn Nets will be the benefactors.