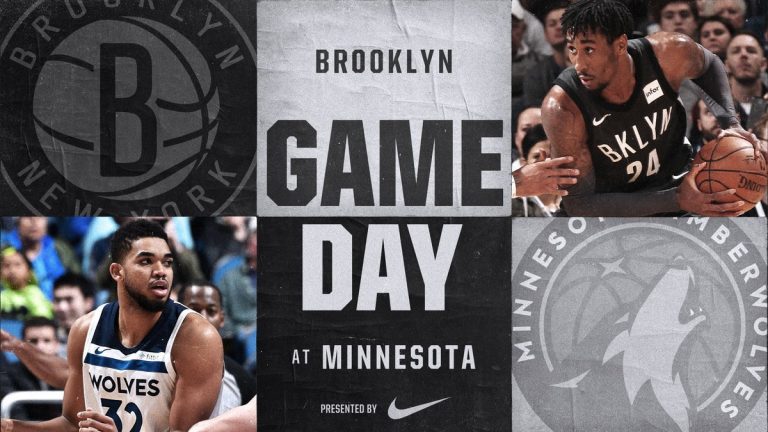 How To Net The Win: Brooklyn Nets at Minnesota Timberwolves, 1-27-18

The Brooklyn Nets will be looking to regain itself after a 116-90 walloping by the Milwaukee Bucks. The Nets shot a horrid 21.7 percent in the first quarter to land themselves in an 18 point hole.

After returning from an eight day injury break, Giannis Antetokounmpo toyed with Brooklyn’s defense, scoring 11 points in the first seven minutes of the game. Milwaukee extended its lead to 23 at the half and besides a run to cut the lead to nine in the third, Brooklyn were never in the game.

The Minnesota Timberwolves were treated with contempt in Oakland, losing 126-113 to the Golden State Warriors. Kevin Durant, Klay Thompson and Steph Curry shot a combined 18-27 from three point land en route to 78 points. In the absence of All Star Jimmy Butler, the Wolves perimeter defense was awful. They allowed Golden State to accumulate a whopping 37 assists on 48 made buckets.

Karl Anthony-Towns lead Minnesota with 31 points, 11 rebounds and 5 assists in 36 minutes. Jamaal Crawford had his best game in a Wolves uniform, contributing 21 points in 26 minutes.

Keys to the Game

Live by the three

Kenny Atkinson’s men will get plenty of opportunities to shoot the long ball as Minnesota rank 22nd in the NBA in three-point defense. They allow opponents to shoot 37.2 percent from beyond the arc and do a poor job on close outs, preferring to clog the lane instead of manning the perimeter. While Towns and Andrew Wiggins are two of the most gifted players in the NBA, they struggle with decision making on defense. Known to be poor defenders, Brooklyn needs to target both to generate good shots from distance.

If there is a game to shoot 40 or more triples, it’s this one. Brooklyn chuck up 34 triples per game (2nd) but only connect at a 35 percent rate (27th). If the saying is true, the Nets can rely on the law of averages.

Brooklyn rank middle of the pack defending the paint (16th), allowing 44.8 points per game. The Nets must clog the lane deploying regular double teams and force shots from the outside. Forcing Minnesota into a perimeter game gives the Nets a good shot at the W.

This statistic is a tale of two teams at opposite ends of the spectrum. Minnesota are 2nd in turnovers (12.6) and rank fourth in steals (8.9) in the NBA. On the contrary, Brooklyn are one of the worst teams in the league, averaging 15.7 turnovers (25th) and generate just 6.1 steals per game (30th).

Minnesota aren’t a run and gun team, preferring to stay in the half-court and run sets. The Wolves score just 10.2 (19th) fast break points per game despite forcing so many turnovers in the run of play.  However, Wiggins and Teague are monsters in the open floor thus keeping those opportunities to minimum is smart.