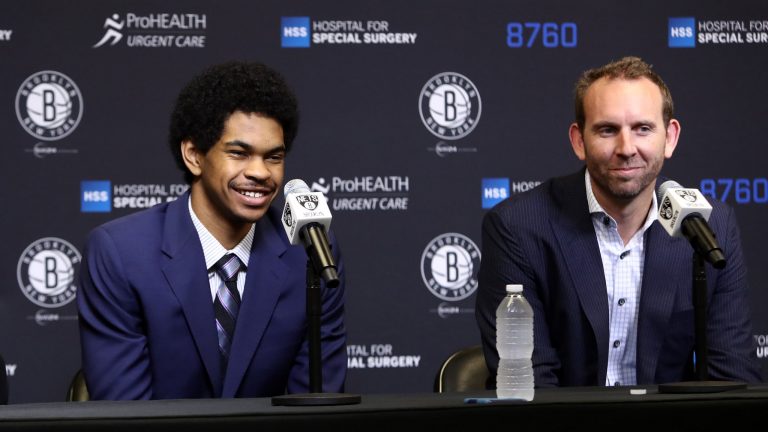 To say Kenny Atkinson and Sean Marks are pleased with how the draft went would be an understatement. After trading away one of their first round picks in the move for D’Angelo Russell, Brooklyn had to make the most out of their one pick. Thankfully, the player they ended up coveting the most fell to them at 22 in Jarrett Allen.

Allen, a talented freshman out of the University of Texas, was originally thought to be out of reach for Brooklyn as he was slotted to be picked anywhere from 10 to 20. Luck would have it that some players went much higher than projected, as Brooklyn was prepared to trade up in order to get the 19-year-old Texan. But who is Jarrett Allen? Why are Marks and Atkinson so high on him?

After taking a deeper look, it isn’t hard to see why.

Jarrett Allen has a perfect frame to be successful in the NBA. He is 6-foot-10, has a 7-foot-5 wingspan, and a 9-foot-1 standing reach to go with his 35.5-inch vertical leap. From a physical standpoint, Allen checks every box that Head Coach Kenny Atkinson looks for in a prospect.

“I’m always on Sean (Marks). We need speed and skill and versatility,” Atkinson said during Allen’s welcome press conference on Friday. “It sounds like we are talking about a guard, but that’s the thing that really stood out about Jarrett was how fast he was, versatile he was, what a good passer he was, his skill level.”

While at Texas, Allen averaged 13.4 points, 8.4 rebounds and 1.5 blocks per game while shooting over 57 percent from the floor. He was the definition of an impact player, erasing shots on one end and posterizing players on the other. He almost carried a one-dimensional Texas team over the number one ranked Kansas Jayhawks, but came up short. Allen ended the contest with 22 points, 19 rebounds and three blocks.

From an offensive standpoint, Jarrett Allen can do a lot. While he doesn’t yet have the bulk to compete at the NBA level in the post, he is very skilled in the paint. He has good footwork, great timing and having a 7-foot-5 wingspan makes snatching offensive rebounds easier.

Allen was also a very good pick-and-roll big in college. His wide frame makes him a great screener, and his natural feel for the game, paired with his skill level, makes him formidable. Allen’s jumper is good enough to make him a threat on the pick-and-pop, and he can put it on the floor to drive to the basket and finish with an emphatic dunk.

He will be right at home in the Nets’ offense and with the ball-handlers on this team. Allen himself is an improving passer, Lin and Russell will be able to find him everywhere on the court, and Allen offers athleticism and rebounding that has yet to be seen on this roster.

Allen Is A “Perfect System Fit” That Needs Some Development

Jarrett Allen checks a lot of boxes, but he also needs to put in some work before he can become a difference-maker at the next level. First and foremost, he needs to bulk up before he can compete in the post. He has an incredible frame, but is only 234 pounds. At only 19 years old, he clearly has a lot of room to grow, but he needs to put on at least 15 pounds.

In Allen’s introductory press conference, Atkinson spoke about this topic:

“Obviously, we have a heck of a performance team here in place thats going to help him get stronger. He will be able to do it in all facets. We are thinking he can go down into the post too. He’s very skilled, very skilled on the baseline and behind the basket. It was just the perfect system fit.”

“Perfect system fit” is a very interesting term for Atkinson to use in regards to Allen, because it shows the Nets truly did their homework to find someone they can mold into something great. It’s true he is incredibly skilled, but he isn’t a three-point shooter, and he is far from being reliable as a passer at the moment. Those are the two things Atkinson and his development team have been famous for fixing.

The best NBA teams don’t just draft guys off of production in college, but also the skill-set they have and where that could go. Jarrett Allen is going to be a good defender and rebounder, regardless of his level of development, but he could evolve into something incredible on offense.

He has a good release on his follow-through and a pretty-looking midrange jumper, and Atkinson has a superb track record of transforming bigs that have a reliable midrange jumper into reliable three-point shooters. Just look at Brook Lopez and Al Horford. In addition to that, Allen has good court vision. If he can learn the nuances of passing at the next level while being surrounded by Jeremy Lin and Kenny Atkinson, good things are going to happen to him.

What To Expect From Him His Rookie Season

With Brook Lopez no longer on the roster and Timofey Mozgov playing a diminishing role with each coming season, the center position is an open competition. Even Kenny Atkinson confirmed this during Allen’s press conference.

If he puts in the level of work that Brooklyn wants to see, it wouldn’t be shocking to see him as the starter sooner than later. It He could even spend some time with the Long Island Nets in the newly-minted G-League, but given the state of the Nets’ front-court, they will need all the help they can get.

If Jarrett Allen hits the gym to bulk up, learns the offensive scheme and gels well with the team, he could have a successful season in Brooklyn. He does things that no one else on the roster does at the moment. He is a legitimate rim protector and is easily the best rebounder and the most athletic big on the team.

Allen would be a good fit along Rondae Hollis-Jefferson, who isn’t the ideal paint protector at the four, and he would be incredible running the pick-and-roll. Where he stands to make the most impact is in transition. He is great at running the floor and was usually rewarded for it at Texas. Lin, Russell and Caris LeVert will have no problem rewarding him at the next level, too.

Jarrett Allen is the type of player that could grow into being one of the cornerstones of the future. He has all the physical tools to be great, is intelligent, and seems to be like the perfect personality to fit in with this eclectic group of players and fanbase. If he applies himself this summer, he could be ready to make an impact in the fall.