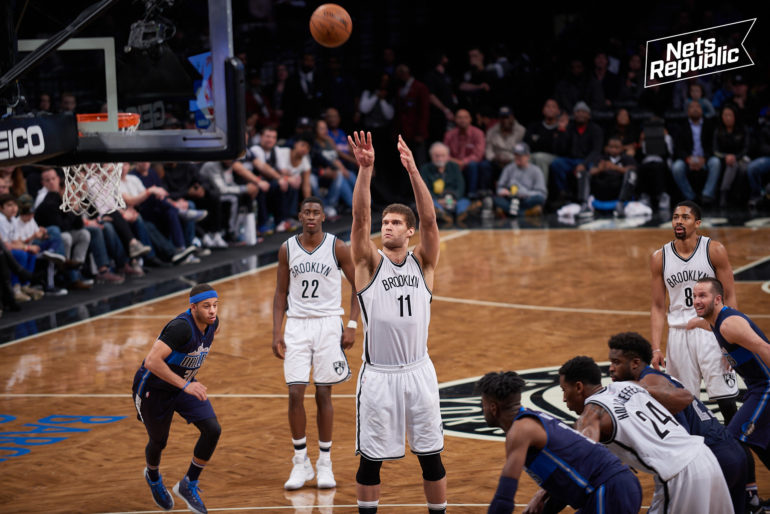 A Farewell Letter to Brook Lopez, a Net We Didn’t Deserve

So, we’ve finally reached the crossroads where you’re no longer a Net; and somehow pigs aren’t flying, the sky’s still blue, and climate change is still ever-too-real in New York City. Somehow, life goes on. Somehow, this whole deal wasn’t just a ploy devised on ESPN Trade Machine — it was reality.

Not that it was a bad trade, by any means. I’d just argue that no one would have been prepared for the day you would no longer be in a black-and-white uniform, even if they were from the Stone Age and began preparing for it by carving seemingly ludicrous predictions on rocks.

Unfortunately, the fact that it wasn’t a bad trade doesn’t make saying goodbye any easier.

See, that’s the thing with sports. You can’t get too emotionally attached to athletes because of the fact that sports is a business, and athletes are just like everyday people — human. Players leave, and players retire, and I wouldn’t be the first to say it really sucks. The trauma on our hearts is even worse when the player has spent nine years with the team, logged 18118 minutes, and became the franchise’s all-time leader in points scored, field goals made and blocks. When that player was the only survivor from the New Jersey Nets. Now that’s when the heartstrings really start to burn.

But, it wasn’t your decision to leave the Nets, and I’m certain you loved every second of it here in Brooklyn. Well, maybe not all of it, but you outlasted countless trade rumors, a 12-win season, six seasons without postseason appearances, and at best, a second-round exit in the playoffs. You’ve even been with a franchise that’s gone through nine head coaches. Really, I’m just letting this sink in again; nine head coaches in nine seasons is pretty damn insane. All the while, you didn’t have a single complaint about the environment here in Brooklyn and just kept doing what you do best — score the basketball and put your team on your back night in and night out.

In all honesty, we didn’t deserve you. How could we, after everything you’ve given to one disappointing Nets team after another?

I really wish there was a way to know you’re in the good old days before you’ve actually left them (thanks Andy Bernard). Now, just by default, I think of the “good old days” as the Jason Kidd–Richard Jefferson–Vince Carter era. But, I know a decade from now, I’ll remember the Brook Lopez era as the “good old days.” Remember that guy Brook Lopez, who had his first career game-winner against Detroit, in his final season on the Nets? Oh yeah, the one who took his teammates to Disney World? The one who became ridiculously good at shooting 3-pointers?

More than anything, I have a strong premonition that Nets fans and writers alike will remember where they were when they heard the news that you were traded to the Lakers. Believe me, I may not have the best memory (in fact, my closest friends would tell you my memory is quite selective of the most irrelevant things), but I know where I was on Tuesday, June 20, 2017 at 6:09 pm ET when Adrian Wojnarowski broke the news of the trade. (I had literally just gotten to my front door after nearly passing out in the scintillating heat.)

We’ll remember because you’re kind of a huge deal to this city, team and the fans. You embodied everything Brooklynites and Nets fans loved, even if you were from sunny, sunny California. I’m sure you’ll fit right into Los Angeles with your goofy charm and lovable nature. If there was a meter for Sean Marks’ definition of “high-character” guys, you’d probably break it, because you’re just overflowing with character in so many ways. (Your rather public campaign to be featured as a Wookie in Star Wars was quite amusing, and you have my full support.) Don’t ever stop being you, Brook.

Some Nets fans have reached out to me to ask how we’ll process this trade. My response had more to do with the direction of the Nets as a franchise, while jokingly saying that we’ll also need “lots of tissues” (I’ve definitely shed my fair share of tears while putting this together). That certainly doesn’t do enough justice to the Nets losing you, though.

No, the proper way to “process this” is by acknowledging that this isn’t the end of your incredible journey with the Nets. The last chapter you’ll have here in Brooklyn will be long after your NBA career is over. Once your No. 11 is raised to the rafters of the Barclays Center, next to the likes of players whose franchise records you’ve shattered during your time here, that’s when we can fully consider it the end of such a wonderful storybook. I’d like to think of your tenure with the Nets as a story that’s just about three-quarters of the way finished. The following chapters will read something like: The Return, The Final Goodbye and The Ceremony. And, if the heavens decide to do something nice for a former Net who undeniably deserves it, then maybe we’ll even get a chapter called The Championship. I sure hope so.

Man oh man, what I would give to have realized I wanted to become a sports journalist earlier in my life. It would have been an honor to cover the Nets for longer than one season with you on the team.

Thanks for everything, Brook. You’ll be sorely missed.