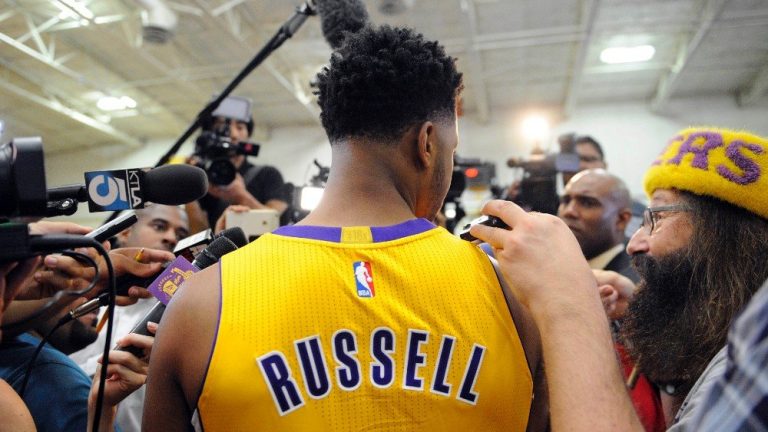 Monday was the first official day of the D’Angelo Russell era in Brooklyn after the team held its press conference welcoming him to the team. The recent move has been a polarizing one amongst fans. There are many who feel giving up Brook Lopez dismantled the hopes of success, some who feel acquiring a former second overall pick and coveted young player was well worth it no matter the cost, and others who feel the need to constantly point out Russell’s flaws.

Russell dealing with a constant flow of love and hate from fans and media is nothing new. It was his everyday life during his two years in Los Angeles. To help get a better understanding of D’Angelo Russell’s time with the Lakers, I figured it’d be best to bring in an expert. I was fortunate enough to get Harrison Faigen, Associate Editor-in-Chief of Silver Screen and Roll and co-host of the Locked On Lakers podcast, to answer some of my questions. You can follow him on Twitter and be sure to check out his work on SSR and subscribe to Locked on Lakers.

NL: When the trade went down, you were the first person I thought of. What are your thoughts on it? If the Lakers don’t land a premier free agent, how bad of a move was it for LA? Who do you think won the trade?

HF: The only way this trade isn’t a clear win for the Nets is if a) D’Angelo Russell completely busts and/or b) the Lakers don’t sign anyone with this cap space in 2018. If their big plans of luring multiple big fish to Los Angeles don’t work out and Russell develops like I expect, this one is going to sting the Lakers for quite a while.

NL: I get the feeling fans and Lakers beat writers were divided on Russell, as a player and person. How do you think Brooklyn will like him? Do you think he will like Brooklyn?

HF: A ton of die-hard Lakers fans are incredibly broken up about this trade, and a bunch of other Lakers fans think it was a great move, which is actually a fitting response to end his Lakers tenure.

Russell was the most polarizing player among his own fanbase I’ve ever seen. Those that liked him cited the per-36 numbers he put up for his age being near players like LeBron and Magic Johnson and his feel for the game, while others saw a turnover-prone player who didn’t shoot above 50 percent. I predict much of the same in Brooklyn unless he comes out firing on all cylinders this season.

For what it’s worth, I thought he was the Lakers’ best young prospect at the time of the trade and think he’s going to be really good. We’ll see if I’m right.

NL: You and I have discussed Lin’s time with the Lakers a little bit in the past. How do you think Russell fits in with Jeremy Lin? Do you think their skillsets will complement each other or clash? Do you think they will get along?

HF: Well given that Lin seems to get along with everyone (besides Carmelo Anthony, apparently) I don’t see any way they won’t get along.

As for their skillsets, I could definitely see them meshing in two-guard lineups. Lin in a lot of ways is an ideal backcourt partner for Russell in that he can alleviate some of his playmaking duties and set him off the ball a bit more. I could see them working pretty well together (although defense will probably be an issue).

NL: Brooklyn’s primary shooting guard towards the end of last season was Randy Foye. A lot of what went wrong with him was how horrible of a defender he was and when he got off the court, Sean Kilpatrick or another non-defender would take his place. What kind of defender is Russell?

HF: Russell is not as bad defensively as his rep would suggest. He’s by no means a stopper, but he showed decent instincts while defending lead ball-handlers. When he switched to the two late last season it… wasn’t good. He seemed to freelance much more, so I would imagine Atkinson would watch tape on that and throw him on lead guards instead of making him run around chasing twos.

NL: There is a negative aura surrounding Russell for some fans still after the whole Nick Young debacle. What kind of teammate is he? What is he like in the locker room?

HF: Full disclaimer: I don’t cover every Lakers game in person, but in my time with the team I’ve never seen Russell have a negative interaction with a teammate. He’s a unique personality and incredibly self-confident, but I get the sense he was well-liked by his teammates.

And as far as Snapchat-Gate goes, the fact that he and Young spent the whole season together setting each other up and celebrating each others’ successes would lead me to believe that’s dead. Young even did the “Ice in my veins” celebration — that I’m sure Nets fans love hearing about given Russell’s “Nets-killer” rep — after hitting a clutch shot this season.

NL: Everyone is talking about Magic Johnson’s comments about needing a leader after moving Russell to Brooklyn. Do you think he is a leader?

HF: I don’t think he’s a leader, because I don’t think any 19/20/21-year old outside of rare exceptions can fairly be expected to be a leader of grown men.

The Lakers had younger players as well, but it’s important to remember D’Angelo Russell wasn’t some superstar coming out of high school. He wasn’t a highly touted recruit and wasn’t really expected to lead until he got to the NBA, all while learning to play point guard for the first time during the Kobe farewell tour funeral circus under one of the worst coaches in NBA history.

Last year was his first real year in the NBA as far as I’m concerned, and while he wasn’t the leader of the team, I don’t think that means he can’t be at some point once he becomes more established.

NL: What are Russell’s best skills as a basketball player? What are his weaknesses?

HF: I think his best skill might be his feel for the game. He seems to understand angles, and despite his low assist numbers he is a phenomenal (if not exactly risk-averse) passer. He can score from all three levels, although he’s not a dynamic athlete in terms of getting to the rim.

His weaknesses right now are turnover issues and defensive awareness, and I’m fully confident his shooting will improve with a player like Lin to get him the ball, keeping him from having to create everything.

NL: Do you think Russell will have a better opportunity for growth & stardom in Brooklyn as opposed to LA?

HF: Better opportunity for growth, possibly, at least in the sense of he gets a fresh start under a new coaching staff with the wake-up call of being traded. Stardom? I kind of doubt it. Unless he becomes a transcendent talent (which he very well could) I don’t see any way he becomes more relevant with the Nets than he would’ve been with the Lakers, no offense.

NL: Following a team as close as you do, you’ve got to have a few good Russell stories. What is one that sticks out to you?

HF: Probably the most amusing story I have about D’Angelo Russell was during his rookie season when he had finished his pregame shootaround and was attempting shots from his back at halfcourt and sunk one. He and the rest of the Lakers training staff went crazy and then he actually had a pretty good game that night:

NL: Kenny Atkinson has revolutionized the Nets’ offense in just one season with the motion offense. They finished sixth in 3PM, fourth in 3PA, and first in pace last season — all without Lin for a majority of the season. How do you think Russell fits into the system?

HF: One of the issues with Russell is that he does not like to push pace as much as his skillset would have you believe.

It was a clashing point last season with the coaching staff, but one would think this trade might be the splash of cold water he needs to get him to go with the flow a bit more, because with his ability to shoot off the dribble and off the catch I think he’d be a terror in transition if he gave it a real shot.

It’s important to remember he was having knee issues for much of last year as well, which could have made it harder on him to really get into the run and gun lifestyle.