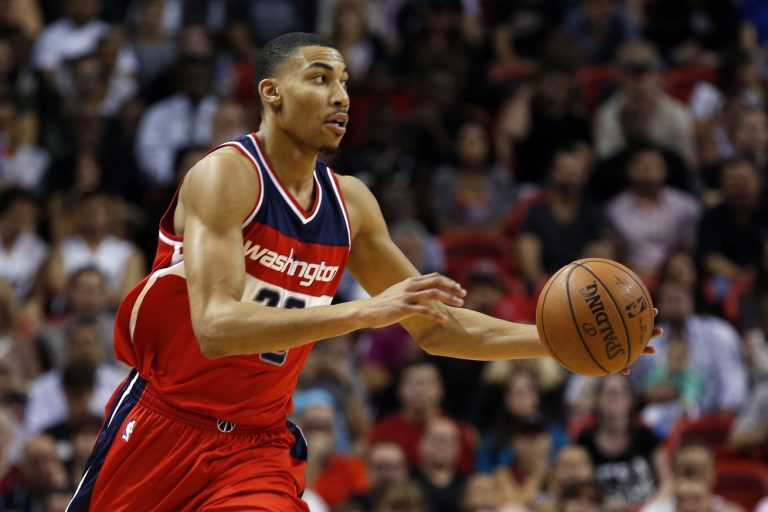 Brooklyn Nets Should Go All In For Otto Porter

Free agency last year was the first one for Sean Marks as general manager of the Brooklyn Nets. One of the ways he attempted to improve the talent on the roster was by being aggressive in the pursuit of restricted free agents. He made a bold move to offer big contacts to relatively unknown young players in Tyler Johnson of the Miami Heat and Allen Crabbe of the Portland Trail Blazers, but both offers were matched, as neither team wanted to lose a promising young player for nothing. A year later, there is once again speculation that Marks will offer large contracts to young restricted free agents. According to Sean Deveney of Sporting News, the Nets have long been interested in forward Otto Porter of the Washington Wizards. He adds that the Philadelphia 76ers and the Orlando Magic will also consider making him an offer this offseason.

One anonymous GM told Deveney that Porter could cost as much as $100 million in total, and it appears the Nets will have competition from other teams to acquire him, as he is a highly-coveted wing player who is just 24 years old. Marks may have a plan to offer him a big contract that could make it difficult for the Wizards to match, and there is speculation that the Nets would offer a max contract to Porter once free agency starts. If that occurs, it is likely he will sign the offer sheet, and under the new Collective Bargaining Agreement, the Wizards will have just two days to match, rather than three under the previous CBA. The max offer for Porter will be for four years in the $100 million range, and at this time, the Nets are $30 million+ under the cap, so the team is capable of signing him to a max contract.

The reason why there will be a lot of interest in Otto Porter in the upcoming free agency is because he is coming off the best season of his career, where he averaged 13.4 points on a very efficient 51.6 percent from the field and 43.4 percent from 3-point range. He was fifth in the NBA in shooting percentage from 3. Porter also averaged 6.4 rebounds and shot 83.2 percent from the free throw line in 32.6 minutes per game, which were all career-highs. A positive sign in his game is that he has improved every single season, and he has been firmly entrenched as a starter the last two seasons. For example, Porter has improved in points per game, field goal percentage, 3-point percentage, free throw percentage and rebounds per game each season.

Porter has shown a steady growth in his game, and although he is a role player, his versatility is a nice fit in today’s NBA on both ends of the floor. Porter’s primary position is at small forward, but he is also capable of playing power forward, and he has good size at 6-foot-8 with a wingspan of over 7 feet. Players that could play multiple positions are increasing in value because they provide more flexibility to the team, and it is certainly the direction the Nets are moving in at this time and for the future. Porter will certainly stretch the floor with his much-improved 3-point shooting. As of now, he is a solid third or fourth option on offense, and his biggest strength is as a spot-up shooter.

Porter was among the very best in the league as a spot-up shooter this past season. He finished in the 97.6 percentile as he averaged 1.32 points per possession in 295 attempts. He simply flourished in the Wizards’ offense, where he was the beneficiary of many John Wall passes when he broke down the defense. A majority of his 3’s were assisted, and he is good at finding open space to wait for his shot when defenses are focused on other players. Porter generally excelled as a perimeter shooter, and according to Basketball Reference, he shot 50 percent from 10-16 feet, 50.7 percent from 16 feet to the 3-point stripe, and 43.4 percent from 3. Per NBA.com/stats, he was also well above the league average in terms of scoring points off cuts to the basket (92.6 percentile), finishing in transition (87.3 percentile) and scoring on putbacks (72.9 percentile) around the basket.

In addition to his improved shooting, Porter is a smart player who knows his limitations on offense, and this is evident in his very low turnover rate, which was the best in the league. For example, he committed only 0.6 turnovers in 32.6 minutes per game this past season, and for his career, he averages 0.7 turnovers in 24.9 minutes per game. He is an unselfish player who can contribute without having plays called for him, and he runs the floor and moves without the ball effectively in order to get open for a shot. Porter is one of those glue guys, and he will be a nice fit for basically any team, due to his offensive efficiency and developing skill-set, especially as a knockdown shooter in the modern NBA. It is quite impressive that he had such a fine season offensively when he actually had the lowest usage rate (14.9) of his career.

Although he is a lightweight at just 198 pounds, Porter is a solid rebounder for a small forward. He also rebounds the ball well enough to play power forward at times without being a liability, and his overall rebound percentage (11.1) was actually better than Paul George (10.3) and Carmelo Anthony (9.2), who are known as good rebounders for small forwards. To use a modern NBA term, Porter is a 3-and-D player, and his length helps him to defend both small forward and power forward positions. His versatility to guard multiple positions is certainly a plus. He is a solid defender who is good at getting in the passing lanes, and his long reach gives him an advantage in terms of contesting shots. In his last two seasons, he has averaged 1.4 and 1.5 steals per game, which is a good number for a forward.

There are many positives about Porter’s game that will be appealing for at least a handful of teams in free agency. But, the bottom line is that he is a role player, even if he is superior compared to almost all role players around the league. A case in point is that Porter is very reliant on the play of his teammates — most notably the playmakers for his success, since he creates little offense on his own. For example, just 2.1 percent of his shot attempts came from isolation, and his field goal percentage in such situations was a terrible 27.8. Porter has a difficult time creating his own shot, as he is rather average athletically, and he is simply too passive at times, which is why he only attempted 10 shots per game this past season. As a defender, he is still above average, but lateral quickness is a weakness, and he is a better team defender than he is covering his opponent man-to-man.

In the five games that Bradley Beal or John Wall, or both missed last season, Porter averaged just 11.2 points and shot only 37.9 percent from the field. It is a small sample, but it illustrates Porter is certainly not a go-to guy offensively, like most players who are offered big contracts are. Just a few days ago, Wall expressed this sentiment when he was openly recruiting Paul George to the Wizards. He said:

It is more than likely the Wizards will match any offer sheet for Porter, but I do not think it will be  a slam dunk that some people make it out to be. If the Wizards sign Porter to a deal in the $20-$25 million per year range as expected in free agency, approximately 60 to 65 percent of the projected salary cap will be allocated to Wall, Beal and Porter, which will certainly limit their cap flexibility in the future. The Wizards’ front office also has to take into account that a potential John Wall “super max” contract would account for 35 percent of the salary cap and is coming soon. That will limit the flexibility even further in their attempt to build a contender.

In addition to the upcoming contract for Porter, the Wizards have obligations to pay center Ian Mahinmi $47 million for the next three seasons, and they have two years remaining on center Marcin Gortat‘s contract for $25 million. It’s likely they will try to move at least one of these contracts in the offseason to free up some cap space, but it won’t be easy. If the Wizards match, it will take some creative cap managing to be under the luxury tax and still have a contending team.

Fit With The Team and Final Verdict

Needing to match Porter to a max contract will negatively impact the cap situation for the Wizards. For the Nets, I strongly believe that it would be in the best interests for the team to offer him the max, since he will be part of the young core and serve as a building block for the future. The Wizards also have a young core of players with Wall and Beal, but the two situations are different, as the Nets are in a rebuilding mode, whereas the Wizards want to contend as soon as possible while they have Wall and Beal in their primes. The Nets can take time to develop Porter into a better player, while the Wizards are looking for another star, and as we know, player development is right up Kenny Atkinson’s alley. It appears Porter has been on the radar since Marks became the GM, and he is almost a perfect fit for Brooklyn’s situation both offensively and defensively.

The Nets need more two-way players, and Porter’s sharpshooting, along with his versatility on both offense and defense, is much-needed in order to have a more complete lineup. The team was 26th in 3-point percentage at 33.8, and adding an elite 3-point shooter like Porter should improve the efficiency on offense. It’s evident that improving the 3-point shooting will be a top priority in free agency, and at just 24 years old, Porter still has untapped potential. He can be even more productive in Brooklyn since he would have a bigger role in a fast-paced motion offense, and he should get more touches as well as shot attempts, compared to before. On defense, Porter would provide stability as another solid defender to go along with Jeremy Lin, Caris LeVert and Rondae Hollis-Jefferson.

With the addition of another playmaker and a scorer like D’Angelo Russell, the offense should be more dynamic this coming season. Porter would fit right in as a sharpshooter who would also benefit from playing with good passers, such as Lin and LeVert. Players improve their offensive games under Atkinson, and Porter could learn to become more aggressive on offense, which can take his game to another level. The goal is accumulating as much young talent as possible for the future, and Marks should go all in on Porter, considering the fit and opportunity to sign a promising young player who could be a part of the core for years to come. No guts, no glory.