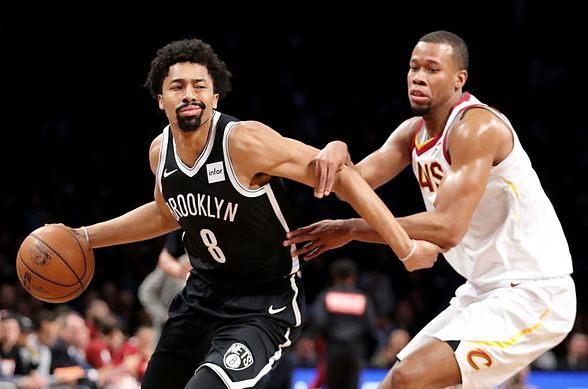 NEW YORK, NY - MARCH 25: Spencer Dinwiddie #8 of the Brooklyn Nets dribbles against Rodney Hood #1 of the Cleveland Cavaliers in the second quarter during their game at Barclays Center on March 25, 2018 in the Brooklyn borough of New York City. NOTE TO USER: User expressly acknowledges and agrees that, by downloading and or using this photograph, User is consenting to the terms and conditions of the Getty Images License Agreement. (Photo by Abbie Parr/Getty Images)
Home
Brooklyn Nets
Justin Carter

What Will Brooklyn Do Without Spencer Dinwiddie?

Early in the season, the Nets lost Caris LeVert to a foot injury and the general tone around the national media was well, the Nets are screwed and probably should tank. That wasn’t necessarily the worst idea in the world, as Brooklyn was in control of their own first round pick for the first time in a while and an outsider looking in on this team would have thought they didn’t have the pieces to be competitive.

Instead, the players that the Nets had left stepped up and helped the team roar back into the playoff picture. They currently sit sixth in the Eastern Conference thanks to the play of guys like D’Angelo Russell and Spencer Dinwiddie, who’ve both received some All-Star chatter from the Twittersphere.

Well…on Thursday, the steady climb that the Nets have been on faced a major obstacle, as Spencer Dinwiddie was revealed to have a finger injury that will keep him sidelined for four to six weeks. To lose a player who’s been as important to this team as Dinwiddie is heartbreaking, but Dinwiddie’s absence doesn’t necessarily spell doom for this team in their hunt to return to the postseason. Let’s take a look at what the Nets will do without Dinwiddie on the court.

The Nets signed Shabazz Napier in the offseason and his role on the team has been fairly uneven, which was always going to be the case if Brooklyn was healthy. Napier had mainly played as a backup point guard in his career, and those minutes just weren’t really there with D’Angelo Russell starting at the one, Dinwiddie backing him up, and Caris LeVert spending some time as the team’s primary ballhandler as well.

Napier seemed likely to find a role with the team after the LeVert injury, but that didn’t really happen either, and Napier spent much of December completely out of the rotation. He’s back in it now, and having him fill the backup point guard role that Dinwiddie had makes a lot of sense.

Napier brings some good skills to the floor for Brooklyn, and he’s hitting in the 37% range from three for the third year in a row. He’s been especially good on pull-up threes this year, draining 41.3 percent of those, and his ability to shoot off the dribble makes him a threat that defenses will have to contend with. In that way, he brings you a facsimile of something Dinwiddie does well also — both players shoot over 40 percent from three when they take three or more dribbles first.

So far this season, Napier has rated as a better defender than Dinwiddie, with Dinwiddie possessing a team-worst -2.0 D-PIPM. While the sample for Napier is much smaller, there’s enough for us to say that the team shouldn’t see too much of an adverse loss on the defensive side.

But while Dinwiddie and Napier compare similarly in pull-up threes and defense, it’s the other areas where Brooklyn has to figure out how to make up for the drop-off. Napier shoots around 6% worse inside of 10-feet than Dinwiddie does, and Dinwiddie is a better passer than Napier. One underrated thing that Dinwiddie does well is making passes to the team’s best spot-up shooter, Joe Harris. We’ve barely seen lineups this year with Napier and Harris together on the floor — just 4.6 minutes per game — but the team has a -2.8 net rating in those minutes. That will be one thing worth watching: Can Napier get the ball to Brooklyn’s spot-up shooters?

We were already seeing nearly 10 minutes per game of Napier/Dinwiddie minutes together, so we can’t just roll with the idea that Napier takes Dinwiddie’s minutes and then we’re done.

What this does is open up some more minutes on the perimeter for some combination of other players on this team. That could be more Treveon Graham, or it could be Theo Pinson time.

Pinson is an interesting prospect, though there’s the obvious limitation of his two-way contract to deal with. Pinson can spend 45 days with the main club though, and seeing as he’s only played in seven games this year, he’s still got some eligibility left. Pinson has played 72 minutes for the Nets this year, and he’s shown some good capability as a scorer inside the arc, but he’s struggled from the outside for his entire career, never shooting over 30 percent from deep during his days at UNC. In terms of replacing Dinwiddie’s production, Pinson doesn’t feel ready to contribute too much to that monumental task, though he’s likely going to be asked to do it. (And let’s be real here — with how this Nets season has gone, Pinson suddenly turning into a guy who hits 38% from three and can’t miss when he gets in the paint isn’t outside the realm of possibilities.)

Maybe The Other Injured Guys Can Play?

Here’s where it gets interesting. Two names who could play some role over the time Dinwiddie is out:

I’ll keep this short: Having either or both of these guys back with the team would be the best possible scenario, but it’s hard to know how possible that is. For LeVert, we’re talking about a guy who suffered a gruesome foot injury earlier in the year and has just recently starting taking shots with the team again. If he was closer to a return than we think he is, it would likely have leaked out by now, so we’re probably still looking at a best-case scenario of the end of February or beginning of March. That’ll be great, but it doesn’t help get through the bulk of the Dinwiddie injury.

Musa should be on the verge of returning from a shoulder injury, but he’s a rookie who last played December 16th. I like his G-League numbers — 20.1 points and seven rebounds per game. He’s shooting 35.6 percent from deep, but he’s still young and could very likely get that up closer to 40. Still, Musa has just 26 minutes of NBA action under his belt, and it’s tough to know how quickly the 19-year-old could step into this rotation and make an impact. Musa has professional experience in Europe, but his last two years came in EuroCup, not EuroLeague, and it was really only his last year where he took a leap and started putting up consistently good numbers. Musa’s readiness isn’t at Luka Doncic levels, though it’s worth noting that he had a lot more experience than Rodions Kurucs over there, and Kurucs has been a revelation for this team.

I was working on a piece about the trade market before this news radically shifted what the Nets will want to do at the deadline. There was the possibility that they could try to be buyers, as long as they weren’t left with any long term deals that would impede the goal of signing a star in free agency.

Now? I don’t know. You’re a thinner team, so you’re less inclined to deal veteran players for a second rounder or something like that. You don’t know if you’re going to be able to stay in the playoff picture, so you don’t fully know how to value your picks. You also don’t know if you need to get involved in the buy out market now.

Here’s what I’d look into, though:

Scour the G-League with a 10-day contract in hand for a promising guard. See who’s out there. Maybe you bring a veteran like Marcus Williams — who leads the G-League in assists and is also a former Net — in, or maybe you look closer to home with a Long Island Nets player who can play the two for you like Mitch Creek. Or you see who’s sitting around, not playing basketball right now: The Sixers got a good find with Corey Brewer, for example, so the Nets taking a chance on an older guy who can play one of the guard spots for you isn’t a terrible idea.

But regardless of what the Nets do to fill the hole left by Dinwiddie, it’s going to be tough. This team could see their playoff hopes slide away if the current players on the roster can’t find another gear. Dinwiddie might be the most irreplaceable player on this team right now; losing him for a pivotal month of the season puts a huge damper on the good vibes that were emanating from Barclays Center.