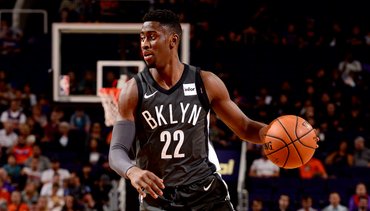 What Caris LeVert’s Return Will Mean For Brooklyn

I want to focus as much as I can on the basketball answers to the question in the title of this piece, but first, let’s address one non-basketball reason why LeVert’s upcoming return — reported by ESPN’s Adrian Wojnarowski to potentially be coming up before the All-Star break — is so important.

We saw the injury live. We were on Twitter to see the reactions. It looked bad. It looked really bad, and I think a lot of people’s initial reaction was to write-off the possibility of LeVert playing again this season and to just hope he’d be able to play next year. The visuals of the injury were that bad.

It turned out that LeVert had only dislocated his foot, an injury that didn’t require surgery and would allow LeVert to play again during the 2018-2019 season. But even knowing that fact, even knowing that LeVert is essentially just returning to the floor after the appropriate amount of time needed to rehab that particular injury, the visual still sticks in our mind. It doesn’t look like LeVert should be back, and the fact that he is is the kind of morale boost that a fanbase that was in turmoil when the injury happened needs.

Alright, the feel-good portion of this piece is out of the way. Let’s talk about the basketball realities of adding LeVert back into this lineup.

What LeVert Brings To The Floor

It’s been a little bit since we’ve seen LeVert play basketball, so let’s take some time to remember what he brings to this team.

A few of the obvious things first before I break down some film and some advanced stats and tracking data: LeVert showed improvement across the board this season, with his scoring jumping from 12.1 to 18.4 and his field goal percentage raising by four percent. He got to the line more, rebounded better, and saw just a slight drop in his assist numbers. His individual offensive rating jumped 10 points, and his true shooting percentage rose, as did his usage rate. By pretty much all metrics, LeVert was on the rise before the injury.

Let’s talk about a couple different parts of his game:

Getting To The Basket

This was LeVert’s first basket of the season, and…well, just take a look:

I hope we get to see more D’Lo/LeVert fast breaks. Both guys are capable ball-handlers, so when they get out on the run they can make a great tag-team partnership happen.

Anyway, LeVert ranks 12th in the NBA in drives per game, and only one player above him shoots better than LeVert’s 57 percent mark on field goal attempts that come off of drives. His ability to get inside and make plays is a big part of his success. Let’s stick with the season-opening game against the Pistons, where LeVert made 10 field goals, with all of them coming in the paint.

Here, LeVert uses a Jarrett Allen screen — something that is very effective and, as I wrote about a couple of weeks ago, a key part of the Nets offensive attack — to get the matchup he wants, and he’s able to barrel into the paint and nail the floater.

Here’s another play from that same game. LeVert gets the ball out on the right wing, and he uses his size and speed to get past Reggie Jackson and into the paint for the lay-up. LeVert has some great body control and his ability to get to the interior on these drives, coupled with his impressive finishing ability, makes him such a difficult player for opposing defenses to handle. Factor in his ability as a passer, and you get a guy who is just incredibly tough to stop:

LeVert drives here, and when Enes Kanter comes in to contest him at the basket, LeVert is able to find a cutting Jarrett Allen for the easy dunk. It’s not an easy pass for LeVert to make, but it’s perfectly timed and placed here. Having LeVert as a passing threat while driving is likely to open things up for Allen, who averaged 15.5 points per 36 with LeVert on the floor this year, while he’s averaged 14.8 with him off the floor. He’s shot 57 percent without LeVert on the floor, while shooting 60.2 percent with him. Having LeVert there has made scoring easier for Allen.

If you’re looking for a place to be a little worried, this is it. LeVert shot just 31.1 percent from three to open the season, a number that’s worryingly low for an offense that needs to get consistent production on the outside from someone who isn’t just Joe Harris.

LeVert shot just 29.6 percent on catch-and-shoot threes, but there is some encouraging news: his 34.4 percent mark on pull-up threes is respectable, and LeVert’s ability to create his own shots can be key to boosting this offense to bigger heights.

We see here LeVert’s ability to shoot the three off the dribble. LeVert seems a lot more comfortable as the lead ball-handler than he does when he gets the ball behind the perimeter in other situations. Here, he’s able to maneuver around, get a switch that he likes thanks to an Ed Davis screen, and step back and create the space he needs to get the shot off.

Let’s stick with that same game:

LeVert takes the pass from Joe Harris at the top of the arc, and the Suns are all over him to prevent him from getting the easy catch-and-shoot look. But that’s not really a problem for LeVert, who uses a great drive fake to create a ton of separation and then hit the three. By putting the ball on the floor and uses his craftiness, LeVert ends up with an easier shot than he would have had.

Here’s an interesting chart for you, and while sample size is small and we don’t want to take too much from it, this is LeVert’s three-point field goal percentage sorted by the number of dribbles he took:

Again, I don’t want to make any grand, overarching argument about these numbers, but it does feel like LeVert shoots the ball better when he’s able to do the work himself of creating space and can get to his spot on the floor.

And that spot on the floor? It’s mostly been the left wing: 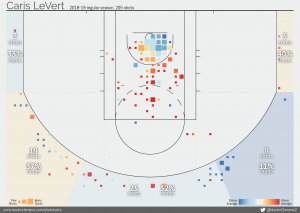 If LeVert can continue getting the shots he wants and isn’t forced to the right side of the court by defenders, he should be in good shape.

Don’t expect heavy minutes for LeVert early, but post-All-Star Game, he’ll likely start to slowly reclaim his earlier role. I’d expect a starting unit with Allen, Harris, LeVert, and Russell, with that four spot probably still going to Rodions Kurucs, unless he continues to struggle. That is, unless the Nets make a deadline or buy-out deal for a starting four who can provide more consistent shooting, which would take advantage of LeVert’s passing skills. Can Kurucs be trusted to knock down open threes off dishes from LeVert? I don’t know. We’ll see soon, but hopefully Kenny Atkinson isn’t afraid to adjust the lineup if necessary.