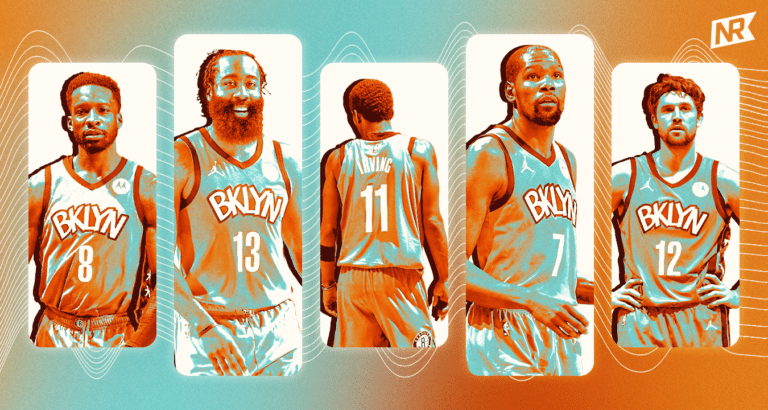 I have class tomorrow morning. I really should be asleep. But, naturally, I’m musing over lineups the Brooklyn Nets could showcase. Most NBA teams have solidified their rotations by the All-Star Break. 40-ish games is an adequate sample size to learn about a team’s tendencies, and make adjustments. The rookie point guard might be playing better than expected, the ‘3-and-D’ wing is only shooting 30% from deep. You know how it goes.

The 2021 Brooklyn Nets couldn’t be farther from that maxim. A midseason blockbuster, a leave of absence, injuries, COVID-safety-protocol-related chicanery. It still feels like we haven’t really seen the Nets at all their systems go. At the time of writing, they still haven’t used their disabled player exception or taxpayer mid-level exception. So Brooklyn still has $11 million to toss around in the buyout market. This article may be irrelevant in two weeks.

And the Brooklyn Nets roster is already stuffed to the brim with rotation-quality players. Of course, Steve Nash isn’t going to play 12 guys every night; but there are a dozen players who could find himself in action on any given night. A theme we’ve heard repeated throughout the season is ‘stay ready’, and that’s unlikely to change as we march towards the postseason. With that in mind, here are some lineups we could see down the home stretch:

Winning Time For The Brooklyn Nets

This feels pretty sealed. The Big 3 + Joe Harris have only played 140 total minutes this season, but the results are as you’d expect: a ridiculous 125 points per 100 possessions, en route to a +18 NetRTG. Which big man flanks those four flamethrowers will be situationally dependent. Jeff Green‘s been getting most of these minutes so far, and that should continue. At over 40% from three, Green’s presence on the floor gives Brooklyn the greatest three-point shooting lineup of all time. Every five-out offense in basketball history has led up to this point. A barren painted area has allowed the Nets to generate their best looks at the end of games. The Nets 4th quarter oRTG of 122.2 leads the league. It’s 6.8 points/100 better than the second-place New Orleans Pelicans, or the same difference between those Pelicans and the 23rd place Orlando Magic.

However! There are spots for the non-Greens. DeAndre Jordan closed vs. the Milwaukee Bucks. His ability to combat Giannis Antetokounmpo with size and strength, while providing positive value in drop coverage, led to 38 minutes, a season-high. Maybe Bruce Brown is having a great game, and his grit is sorely needed down the stretch. And don’t count out Blake Griffin. We hear, over and over, that Brooklyn is home to the NBA’s best medical/training staff. We just saw Griffin play at an All-NBA level two years ago. I won’t be stunned if he’s the fifth-best Brooklyn Nets player on the court some nights. His ability to act as a fulcrum at the high-post, hitting cutters and shooters, could be more useful than Jeff Green‘s outside shooting ability on a given night, if the defense is passable.

Two stars! Get it? Anyway, After losing Spencer Dinwiddie and those involved in the Harden trade, the Brooklyn Nets’ original 2 star outfit has suffered. Kyrie Irving and Kevin Durant have hardly played together, without Harden, since the Beard’s arrival in BK. The total success of those lineups? A minus-one across 85 minutes. It’s far too small of sample size to look into (a huge chunk of that data came from the second Washington loss, where Harden was inactive). But we’re going to see much more of these lineups in the second half; James Harden needs his rest too.

Obviously, these lineups are a bit reductive. Joe Harris could slot in, and it’d go swimmingly. I simply see him adding even more value in Harden-centric groups. Irving/Durant + bench lineups could be his chance to rest as well; I want Harris on the floor in just about every one-star lineup.

I also don’t foresee a ton of minutes for Brown in these lineups, unless his outside shooting improves. It’s not that he isn’t a better player than, say, Timothé Luwawu-Cabarrot. But without Harden’s all-time passing ability on the floor, Brown’s lack of floor-spacing may cause a bit more of an issue. Kyrie and KD are not as capable, or willing, to abort a scoring opportunity because Brown pops open for a half-second. Now, nights where his perimeter defense is needed above all else could still crop up.

Yet, there are a lot of options within these lineups. Going with TLC and Green at the five gives Brooklyn decent size and fairly seamless switch-ability. Landry Shamet and Tyler Johnson are each better point-of-attack (POA) defenders than TLC. Playing that duo against perimeter-oriented teams with Jordan in drop defense is solid. I see this as perhaps the most ideal situation for Shamet to contribute. Oh, and we already know the “clean sweep” trio wants to play together. It helps that Jordan has already shown terrific alley-oop chemistry with each of Durant and Irving.

I’ve touched on this a few times already, but Kyrie/KD groups look to be the most seamless fit for Griffin. Griffin, even as he rapidly ages, succeeds with the ball in his hands. More so than Harden, the Brooklyn Nets’ other two stars can add value in certain sets playing off the ball, spotting up or curling off screens, allowing Griffin to flash his decision-making prowess.

Moving on, we haven’t seen Harden and Durant play much together since the dawn of Brooklyn’s Big 3 era. Especially without Irving on the floor. Things have changed greatly since mid-January. Here’s how we might see the Harden-KD lineups shake out:

This is the one I really want to see. Give James Harden a high-activity lob threat, the most versatile scorer in the game, and two catch-and-shoot assassins. Man, oh man.

Lineups with both Brown and Jordan on the court have been successful at times, tricky at others. Harden is a masterful floor general; he can make two non-shooters (sorry, Bruce) work most of the time. But adding Kevin Durant‘s unstoppable midrange game to that mix, along with Harris or Shamet lurking around the arc, gives the Nets a deadly scoring presence at every area on the court. Playing Nic Claxton at the five would turn this into a comfortable all-switching lineup, although, offensively, the quality of his screens still lag behind Jordan.

There’s no way to know what front-court pairings work until you try them. Jeff Green is a valuable small-ball 5, but the marksmanship he’s displayed this season means it’d be foolish to solely use him in that role. Defensively, this would be a huge lineup, regardless of the 5 man. Meat and limbs everywhere. If the opponent is running a traditional, screen-setting center, Jordan could prove of use. If Green and Griffin work together, a whole offense around three-man actions with Harden, KD, and Blake, become unlocked. You have to trust Nash and Mike D’Antoni to figure out how to utilize all that offensive brainpower.

I would list Harden/Irving lineups, but those are the ones we’ve actually been accustomed to seeing over the past month. At the time of the trade, I surmised Harden and Irving would be the least common duo Brooklyn would roll out. Couldn’t have been more wrong. Anyway, the only unplaced puzzle piece in these lineups is Blake Griffin. If Griffin has enough juice left to set screens for Harden, and roll downhill making crisp 4-on-3 decisions…look out. On to one-star lineups!

Creator of the first heliocentric model, of course! For all the talk of how different Harden looks in Brooklyn, the numbers don’t back that up. He still possesses the ball for nearly nine minutes a game, 4th in the NBA. In addition, his seconds and dribbles per touch each rank 10th league-wide since putting on the Nets garb (per nba.com/stats). All of which to say, Harden isn’t out of place leading the heliocentric lineups. His ability to carry an offense on his shoulders has made him one of the greatest floor-raisers in NBA history. Give the Beard enough shooting, and maybe a threat on the roll, and the offense is getting a good look each time down. It’s that simple.

This lineup maximizes shooting, particularly with Johnson on the court. However, that iteration is less defensively intimidating, lacking some size and strength. TLC bridges the gap as a better shooter than Brown, and a bit bigger, but a decidedly worse defender. Brown is the best defensive option, but he turns this lineup into a 4-out, 1-in dynamic, although that hasn’t been a negative so far.

In any case, the Harden, Shamet, and Harris trio is obliterating fools this season. The Nets are shooting 46.1% from deep with those three on the court, having a +/- of 60 in 113 minutes. And, sure, we keep talking about Jeff Green as an awesome stretch-big this year. But don’t forget, he can snap off a dive to the rim and go head-hunting. It keeps defenses honest:

Again, DJ or Claxton provide some vertical spacing for the best lob-thrower in the NBA. If it’s Brown on the court instead of Green, the bet is the aforementioned flame-throwing trio provides enough shooting by themselves. Brown and Claxton with this lineup, again, provide scary switching ability 1-5.

I don’t foresee a ton of one-star KD or Kyrie lineups when the Big 3 are all playing. But that’s not gonna be every night. Griffin should have a chance to excel in these lineups, with a relative lack of ball-handling available once Harden exits the floor.

Oh yeah. We’re going small. I’d be curious to see this lineup due to its defensive potential, surprisingly enough. It surrounds Jordan with Brooklyn’s best POA defenders. You can’t roll this lineup out against every team, but it could a good counter to offenses with multiple ball-handlers that run a ton of side pick and rolls. The Suns, for instance. Is the size difference between Joe Harris and, like, Cam Johnson really a deal breaker?

Shooting and ball-handling around Durant helps him anchor an offense, when that’s not really what makes him a HOFer. Of course, though, KD is quite the anchor to have.

Because of Blake Griffin‘s lack of explosiveness, I don’t know about playing him and Bruce Brown at the same time. Two guys that figure to do most of their damage in the mid-post area. Pairing either of them with a lob threat, which one dependent on the type of defense you want to play, makes more sense. Add shooting in Shamet and Harris around one of the stars, and this unit is quite intriguing on both ends.

Still, this list isn’t exhaustive. That’s the beauty of the Brooklyn Nets’ astounding depth chart. We’ll see a handful of lineups I haven’t broached for discussion in this article. Ones that are so obvious in their potential, I’ll be kicking myself for not seeing it sooner. And, as already mentioned, the Nets likely aren’t done adding to their collection. On Wednesday, NBA insider Marc Stein said “No one out there thinks Blake Griffin is the Nets last move.” Just wait until we have to re-visit this conversation on the eve of the playoffs. Scary hours continue.