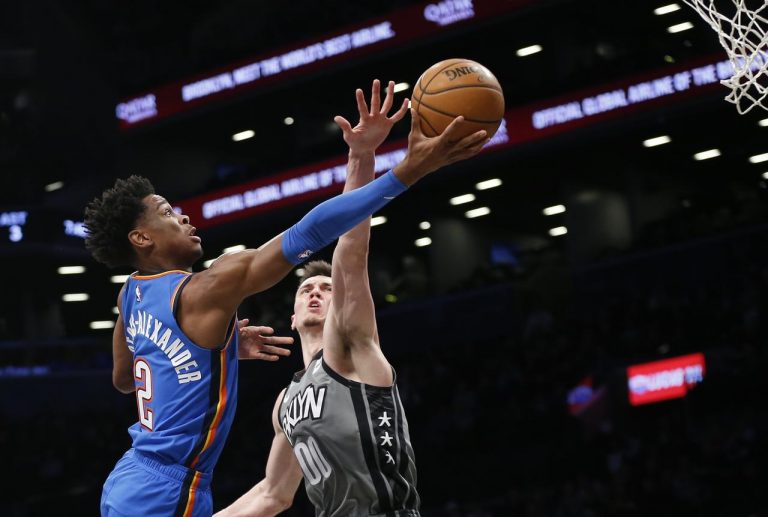 Another day, another loss for the Brooklyn Nets. This time it was the Thunder who defeated the team, 111-103.

Chris Paul was superb as he dominated down the stretch to lead OKC with 28 points, 6 rebounds, 3 assists and 2 steals. In the final period Paul had 10 points in 2 minutes and 37 seconds, finishing with 16 points for the quarter.

Rodions Kurucs replaced Garrett Temple in the starting lineup and made a real impact on both ends. Who doesn’t love a good Kurucs cut?

There was highlights aplenty, Jarrett Allen dunking with ferocity and LeVert provided a spark in his return after he was rested against Orlando.

The only downside was Spencer Dinwiddie who only registered 2 rebounds and 2 assists in the first half. Dinwiddie started attacking the rim in the third after a spray from Coach Atkinson and got himself into some offensive rhythm.

Allen remained aggressive and had one of the filthiest blocks of the season.

To go with another disgusting dunk.

Thanks to a spark from Caris LeVert, the second unit regained the lead to end the quarter 77-74.

The Nets have been outscored handsomely in fourth quarters over their six-game losing streak. While they were better, they still weren’t able to hold on as Spencer Dinwiddie missed a crucial free throw with just over 11 seconds remaining. If he had made the shot Brooklyn would have sealed the win. Instead the game went to overtime where the Thunder outscored the Nets 10-2.

There were some key problems in the fourth and OT. One was the decision making and poor execution from Dinwiddie down the stretch. Credit to him for taking responsibility for the poor showing.

Kenny Atkinson also strangely sat LeVert for all of overtime, despite being the best performer on the night.

Yes it’s important to keep LeVert healthy for the long-term but he had only played 22 minutes up until that point of the game. An extra five minutes or so really isn’t going to increase the likelihood of re-injury that much. Take into account, also, that the team has three days off until the matchup with Miami at home.

There were some bright spots from the game. However, the glaring mistakes overshadowed all the good and prevented Brooklyn from ending their losing streak.