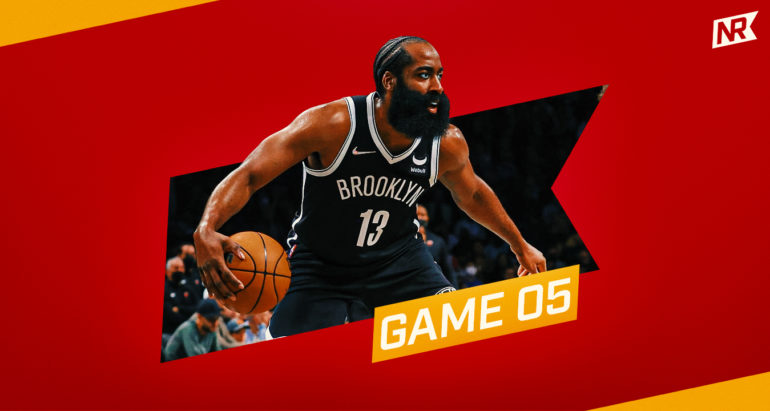 Takeaways From Nets’ Sluggish Loss to the Miami Heat

Life is all about expectations. The Brooklyn Nets lost another home game, this time to the Miami Heat, that was probably enjoyable for Nets fans for about ten minutes. It dropped them to 2-3, and the vibes are decidedly not good. Nobody is having fun. Vaccinations and rulebook changes are not the most enjoyable themes to surround a team. Their 2-3 record ties them with the Toronto Raptors, who, conversely, are having a ton of fun. The half-court offense is suspect, but Scottie Barnes looks awesome, and everybody is in love with Dalano Banton. Expectations, man.

None at all. Zilch. When Dewayne Dedmon (a fine player), looks like prime Dwight Howard, there’s a problem on the glass. The raw totals are ugly enough: 62-42 in the rebounding department overall, including a 17-4 edge on the offensive glass. But that doesn’t quite do it justice. We know Brooklyn doesn’t place heavy emphasis on offensive rebounding; LaMarcus Aldridge and Bruce Brown are the only ones who look to get their hands dirty down there. But getting repeatedly burned trying to protect your own backboard is another story, particularly after the Nets signed a thousand big men this offseason after the glass had hurt them last season.

Most of this is a mentality issue, to be certain. A willingness to be physical with an abrasive Miami team. Some of it is scheme as well; there were more than a couple possessions in which a switch left the sole Nets big guarding out on the perimeter, with, say, Bruce Brown matched up with Dedmon for the board.

I wrote this after the season opener vs. Milwaukee, but if your big (and old) lineups are not playing big, then you’re just playing slow. And the Nets looked slow against Miami, and to make matters worse, disjointed. This time the numbers don’t come close to doing it justice. According to the stat sheet, Miami only outscored the Nets on the fast break 18-17. But that doesn’t count plays like this, where the Heat pushing the ball up the floor leads to a fatal mismatch in the paint:

Pace killed the Nets all game long, and between a leaky defense, both in the half-court and transition, the game likely wouldn’t have been close if Miami had knocked down as many of the open shots as you would expect them to in the first half. A little pace here tears the Nets defense apart, as nobody communicates and an excellent outside shooter mambos into a three:

They Can’t Afford to do This

This is a team that’s been around the block as individuals, not collectively. So they’ll all say the right things. “It’s about building towards a common goal,” “We know this will take time,” “We’re emphasizing good habits,” and so on. And that’s all very good and true. We heard it last year, and nobody can deny the Nets didn’t get where they wanted to go as a team, taking the eventual champions to the absolute limit with 1.75 of their two best players out.

But you, I, and all of the Nets, deep down, knew what the deal was. They sleepwalked against a handful of opponents in the midst of a brutal 2021 schedule. There were, much like Wednesday, nights full of turnovers, standing around, and defensive miscommunication, and lacking rebounding. Even as the team improved and played their honest-to-god hearts out, there were still nights where the opponent would take at least ten more shots than them, and it didn’t matter.

This is a different year. There is no Kyrie Irving for now, James Harden is not yet who we know, who we hope, he still is, and the last year’s most offensively dynamic big man is now in Denver. No Kyrie, no Jeff Green means a lack of guys who can create pressure on the rim, whether by rolling off a screen downhill, or with the ball in their hands. No amount of effort can fix that, that’s simply how the roster is built.

And yes, Brooklyn will have better days shooting from the outside. But this is not possibly the greatest shooting team of all time, as we saw last season. Too many gorgeous possessions this season are ending with a subpar shooter (Paul Millsap, Blake Griffin, DeAndre’ Bembry) taking an open three. And it doesn’t matter how sexy the path that the ball takes to get there is. It’s still a win for the defense.

Offensively, these Nets, for now, have real flaws that no amount of familiarity and effort can cover up. So that means for damn sure, they can’t allow opponents to take eleven more shots than them and expect to win. Especially not the Miami Heat. If there’s one real lesson to be gleaned from this season’s first five games, it’s that the Brooklyn Nets are not talented enough to sleepwalk into wins. Does that mean we should revoke their ‘Superteam’ card?