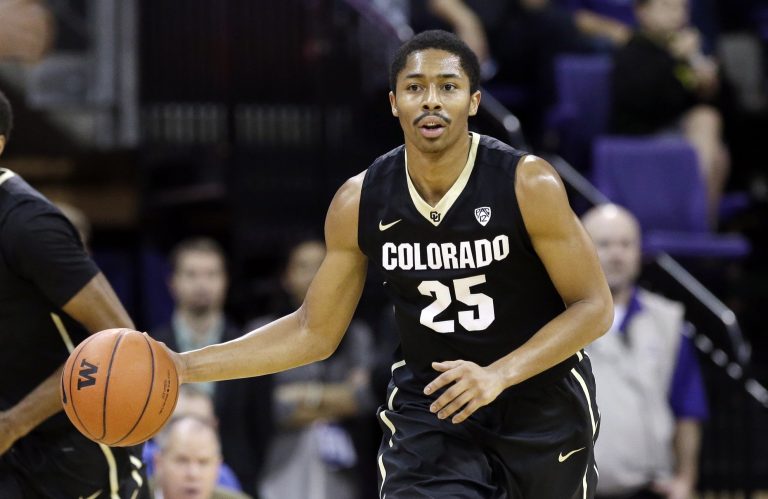 Spencer Dinwiddie is the latest NBA success story. And his book is far from its ending.

In his second year with the Brooklyn Nets, Spencer Dinwiddie the former Colorado standout has made significant improvements across the board, rising from a player whose future in the league was bleak to becoming a more-than-reliable starting point guard for a rebuilding franchise.

The Break Through Season:

Heading into the Nets game against the San Antonio Spurs on Wednesday, Dinwiddie has suited up for 43 games and started in 33 of them. He rocketed up the depth chart after the injury to D’Angelo Russell, and he’s more than deserving of the increased role given to him. Dinwiddie’s averaging 28.1 minutes a night this year, up considerably from his 22.6 last year. In that time, he’s putting up career-highs in the following categories:

Dinwiddie’s most enchanting attribute is his composure as a floor general. His ability to command the offense is old-school. Unlike a lot of his contemporaries, Dinwiddie isn’t a score-first point guard even though he’s got the skill set to be one. The assists come as a product of Brooklyn’s offense, wherein Kenny Atkinson doesn’t restrict his guards. He has total confidence in them, which allows a more free-flowing approach if things get stagnant.

Dinwiddie, at 6-6, has incredible vision and complements that with a brainiac-level basketball IQ. His primary focus is just making the right play, whether it’s a drive-and-kick to the corner or a pocket pass out of the pick-and-roll. The aversion to making the homerun play is somewhat annoying at times because the league’s best playmakers are also its greatest risk-takers. On the other hand, this young team is already prone to turning the ball over, and it would be equally annoying if Dinwiddie was contributing three or four or five turnovers.

His reluctance, however annoying, has led to just 62 total giveaways this season — an average of 1.4 a night. That assist-to-turnover ratio is 4.44, which is the highest among players who average at least 20 minutes per game, according to NBA.com.

Consistently starting has allowed Spencer Dinwiddie to get into a rhythm that he’s never had before. The result of that is a player who can play more aggressively, and we’ve seen Dinwiddie light up the scoreboard in recent months. He’s tallied 11 games thus far with at least 20 points, including a 31-point outburst against the Toronto Raptors on Jan. 8. (That was the second-straight game where Dinwiddie failed to get the benefit of the doubt from the officials in crunch time.)

Dinwiddie’s had his fair share of striking moments to go along with the statistical improvement. Against the Minnesota Timberwolves on Jan. 3, he had two go-ahead buckets with less than 90 seconds to go in the game. The first was a high-arching running fadeaway over the outstretched arms of Taj Gibson and Tyus Jones. The more memorable one came with 9.7 seconds left. Dinwiddie, who’s become infamous for pulling up and shooting unnecessary threes, got a switch and was guarded by Gibson again. He attacked and shot another high-arching jumper, putting the Nets up 98-97.

Months before that, though, there was the “Spencer Dinwiddie” game against the Cleveland Cavaliers. It took that name because he hadn’t yet turned into what he is now, so an outburst against a premier team was shocking and surprising but also entertaining.

With Brooklyn down 100-97 with 2:25 left, Dinwiddie hit a three from the corner. He then assisted on a subsequent three by DeMarre Carroll, which re-tied the game at 103. Shortly after, with 43 seconds left, he pulled up and splashed home a 30-footer that gave the Nets a two-point lead. Dinwiddie iced the contest with two free throws to put Brooklyn up 112-107, which consequently was the final score.

As sensational as Spencer Dinwiddie has been at times, there have been some forgettable performances as well. The root, oddly enough, is his shooting.

Overall, Dinwiddie makes just 39.2 percent of his shots and 34.3 of his threes. His effective field goal percentage — a number that adjusts for a three-pointer being worth more — is just 48.1 percent. Among all players attempting 10 or more shots a night, that’s the 19th-worst, per Basketball Reference. Some notable players beneath him are Russell Westbrook (47.0 percent), John Wall (46.2 percent), De’Aaron Fox (43.1 percent) and Lonzo Ball (43.0 percent).

Some of those struggles are shot selection and some are just the shots not falling. As of late, Dinwiddie’s offset his meager shooting by getting to the free throw line. Over the Nets’ last seven games, he’s averaging 4.6 foul shots a night. It’s not an overdramatic number, but at least he’s not a total offensive liability.

No matter what happens, Spencer Dinwiddie’s offense directly impacts the rest of his team. Because he’s a primary ball handler, most possessions start with him. When he’s not shooting well, the defense can give him less attention and focus it on a player who’s making a more significant impact. That, effectively, means the Nets are playing 4-on-5 on offense. As the season wears on, finding a rhythm again should be the priority for Brooklyn because they’ll be able to return to some level of lethality. Furthermore, it’s nearly impossible to compete in this league without an aggressive point guard.

Spencer Dinwiddie has had a sensational season, but there’s still a lot he can do to reach his full potential like becoming a better defender and finding ways to get the shots he’s most comfortable with. Fortunately, the Brooklyn Nets are putting him in a position to build confidence and fine tune his game. The training staff has worked wonders for a bunch of guys and Dinwiddie’s one of them.

For the first half of the season, grading his performance as a B- isn’t an outlandish mark.