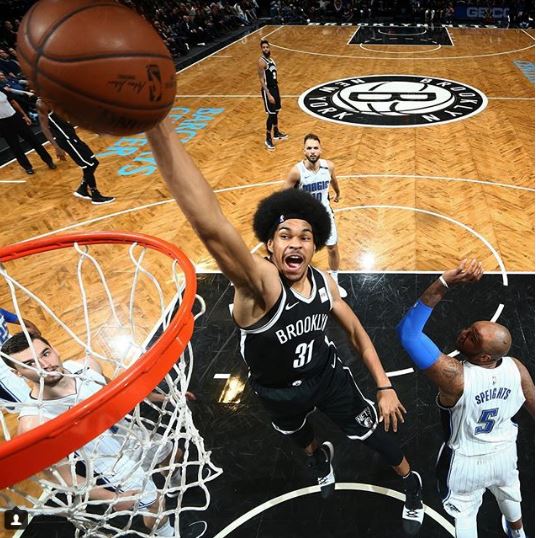 In this the second segment the scribes make their selections for NBA Awards 2017-18. Additionally, we also take a look at if and when any Brooklyn Nets might find their names included in the end of season awards.   In part one of the four part Awards Segment we dive into rookies with a view to Jarrett Allen‘s year and his ceiling.

Pick your top 3 candidates for Rookie of the Year.

Ben Simmons numero uno, Donovan Mitchell runner-up, Jayson Tatum tres. Each rookie showed more advanced skill in certain areas than expected too. Simmons thrived as perhaps the most versatile defender in the league already to add to his passing acumen. Mitchell acquitted himself impressively in a high usage offensive role by learning the craft of finishing layups over the behemoths of the NBA. And Tatum turned into an immensely valuable 3-and-D weapon for Boston to replace the sudden Gordon Hayward void.

1) Ben Simmons, PG, Philadelphia 76ers: He’s led the 76ers from the cellar of the league to a second-round playoff appearance, he’s the clear cut choice.

2) Donovan Mitchell, G, Utah Jazz: Mitchell has been almost as impressive as Simmons in a stronger conference, but Simmons has the edge defensively and has been at this current level for nearly the whole season.

3) Jayson Tatum, F, Boston Celtics: Tatum was a 3&D weapon for the Celtics for the entirety of the year, and with more opportunity at the end of the season he showed the potential to be more.

While I understand why Ben Simmons will win ROY, if I had a vote it would go to Donovan Mitchell. I’d prefer a repeat of 94-95 when Grant Hill and Jason Kidd were duo winners. Regardless of what is said Simmons got to be around his team for a full season witnessing what it takes to be a professional and excel.  Third place is also a no brainer as Jayson Tatum played with the maturity of a seasoned vet taking on a larger role when Gordon Hayward got injured.

Where does Jarrett Allen rank if not in your top 3?

Jarrett Allen is worthy of a spot on one of the All Rookie teams, but I wouldn’t have him in my top 3 for this rookie class. I would put him sixth behind the three above plus Jayson Tatum and Lauri Markkanen.

This has been a loaded rookie class so no offense should be taken when I say Jarrett Allen would probably be my 15th ranked rookie from the year. An even more impressive feat when considering he would be the youngest rookie out of that top 15.

Jarrett Allen ranks in the top 8 for me. He’s been one of the best rookie big men this year and is certainly outplaying his pick number, but this is a deep rookie class and Allen didn’t do enough to leapfrog players like Kyle Kuzma and De’Aaron Fox.

In an extremely deep class (see below) Allen made a big impression. In spite of that where he falls among Lauri Markkanen, Bogdan Bogdanovic, Kyle Kuzma and OG Anunoby who also rank high for me is somewhere between sixth and eighth.

Allen was definitely a top-ten rookie this season, but I would put the three players listed above, along with Kyle Kuzma, Lonzo Ball, Lauri Markkanen, and maybe John Collins above him. It’s hard to compare rookies when they’re on lower-tier teams because you can’t tell if their numbers are a product of being on a bad team or if they’re the real deal.

Does Jarrett Allen make either All Rookie Team? (which one if yes).

No, but that doesn’t mean he can’t or won’t become the best center from this rookie class.

First team. He was easily the best rookie center this year and no one else really came close.

With all the chatter surrounding LeBron James draft class it’s interesting there are only five players remaining from the first round still playing with good odds two (Dwyane Wade, Nick Collison) or three (David West) retire this season. The other active player is Carmelo Anthony.

I bring this up simply because the 2017 draft class may well end up as the greatest in history. With that Jarrett Allen making the second all-rookie team should be considered a major accomplishment.

I wouldn’t be surprised if Allen was the final member of the All Rookie First Team along with Simmons at point guard, Mitchell at shooting guard, Tatum at small forward, and then Kuzma or Markkanen as the power forward. But I also wouldn’t be surprised if the voters slid one of Kuzma or Markkanen to the fifth spot which should belong to a center, or if Collins was voted to the first team and Allen ended up on the second team.