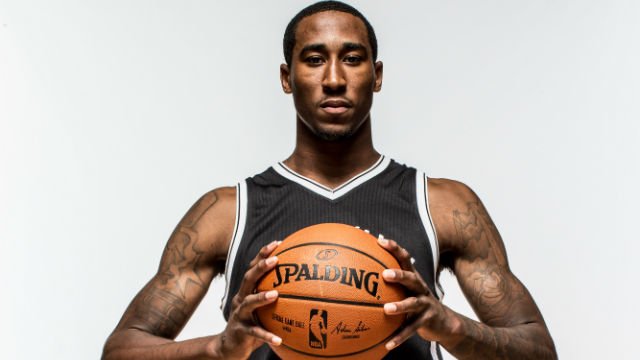 Rondae Hollis-Jefferson Presents a Number of Possibilities for Nets

Rondae Hollis-Jefferson had one of the most interesting story arcs of any Net last season. He didn’t fall into a sophomore slump, yet he failed to take the leap that some projected.

Hollis-Jefferson (RHJ) played 78 games (a vast improvement after only participating in 29 games his rookie season) over the course of his second season in the NBA. The Nets have only totaled 41 wins over the course of Hollis-Jefferson’s first two seasons in the NBA. However, this hasn’t necessarily been due to RHJ, as Brooklyn has won 29 of those contests with him on the court.

RHJ is one of the last players on the roster remaining from the Billy King era. Sean Marks has been quick to move on from players who were around during King’s reign as he has traded Brook Lopez, Chris McCullough, Thaddeus Young and Bojan Bogdanovic over the course of the past year and a half. In fact, RHJ is currently longest tenured Net, and the only player remaining from the start of Brooklyn’s 2015-2016 campaign.

The longest tenured Brooklyn Net is now Rondae Hollis-Jefferson, who arrived in 2015 on #NBADraft night.

Hollis-Jefferson was acquired by the Nets’ via a draft night trade. He was originally selected by Portland with the 23rd pick and was subsequently traded for Mason Plumlee and Pat Connaughton. With Plumlee’s future with the Denver Nuggets currently in much doubt due to the development of Jusuf Nurkic, Brooklyn appears to have come out on top in this deal.

The 6-7 swingman showed a lot of promise when he was the court during the 2015-2016 season. In a season that was marred with chaos within the front office, RHJ stood out as one of the only bright spots, despite barely playing a third of the season. At a point in time where King was being slammed for trading away the team’s future, Hollis-Jefferson appeared to be a gem.

RHJ has also been a fan favorite off the court as well. He famously participated in the Talent Challenge during All-Star Weekend, 2016. This unique event involved Hollis-Jefferson playing a piano rendition of “Do You Want to Build a Snowman” from the hit Disney movie, Frozen. The former Arizona Wildcat was also voted “Funniest” by his rookie class in 2015.

After generating a lot of positive buzz during his rookie season, fans and the media naturally expected improvement on RHJ’s part the following season. He was even discussed as the fourth best sophomore going into the 2016-2017 season behind Karl Anthony-Towns, Kristaps Porzingis and Nikola Jokic. This put him in the same conversation as Devin Booker at the time.

Did Hollis-Jefferson take the quantum leap that some expected? Not quite: but let’s delve into his performance last season from all angles.

While defense will always be Hollis-Jefferson’s biggest asset, he has sneakily been a pest in another category; rebounding. Despite being considered undersized for the power forward (where he played 52% of possessions last season) position, he has utilized athleticism and length to become a glass eater.

RHJ totaled 356 boards last season, 96 of which were offensive rebounds. This total ranks in the top 20 among power forwards, and top 10 ranked among fours who are under 6-9. His per 36 minute rebounding numbers jump off the page even further. Through this metric, Hollis-Jefferson jumps into the top 15 among power forwards, and surprisingly places ahead of some notoriously well-respected rebounders. Some of these players include Giannis Antetokounmpo, Paul Millsap, Gorgui Dieng, Draymond Green and LaMarcus Aldridge.

Of course, any conversation about RHJ must mention his defensive prowess. Opponents only shot 33.7% on three-pointers when matched up against Hollis-Jefferson. In looking at the cream of the crop defensively; Draymond Green’s assignments connected on 29.5% of threes. RHJ held opponents to 45.4% on all field goal attempts, which is respectable when looking at the Nets’ overall opponent field goal percentage (45.8%.)

He is particularly effective when guarding ball handlers who are driving to the hoop. His quick feet and 7-2 wingspan allow him to literally reach over opponents to disrupt a shot or pass. Hollis-Jefferson never gives up on a play; even when the shot clock is winding down and it appears as though the opposing player will not get off a clean shot.

What RHJ lacks in offense, he certainly makes up for on the other end of the court. Compare this situation to that of an offensive minded swingman, such as Nick Young. Young can get hot offensively at any moment, as a result pumping up the crowd. Between this style of play and entertaining off-court antics, he is a fan favorite. Yet, Young is one of the worst rated wing defenders in the league. He is the quite literally opposite of RHJ in the sense that he is one-way player favoring offense. However, Young’s breed gets a lot more attention purely because it is more exciting for fans to watch a player nail three consecutive threes as opposed to making three straight heads up defensive plays. Players who play a similar style to Young certainly have proven to have long careers, (looking at you, Tim Hardaway Jr.). This should mean RHJ will be a rotation player, at the very minimum, for years to come.

As far as areas of weakness go, RHJ’s shooting deficiencies have been at the forefront for quite some time. He was slightly more aggressive from behind the arc last season, under Atkinson but this did not prove to be a successful strategy. He ultimately shot a worse percentage than his rookie season (28% vs 24%.) Hollis-Jefferson has attempted to shoot through his troubles in hopes of finding his touch eventually. Yet, the question must be asked; when will the Nets’ coaching staff give up on his outside game altogether.

At 22 years of age, it’s not inconceivable that Hollis-Jefferson will become a semi-reliable shooter from behind the arc eventually. There are examples of this scenario transpiring with other wings. It took Larry Hughes four seasons to crack 30% from behind the arc. He would go on to have several seasons where he shot over 35% from three-point land. This is not an eye-popping number, but it was enough to make Hughes playable in important games.

There are also wings who have taken small steps to add an outside shot over their career. Gerald Henderson saw a drop in his outside shooting numbers between his first and second seasons, yet has slowly become an average shooter. He went from shooting 19% from behind the arc his first season to having made over 35% the past two seasons.

While many may have given up on RHJ’s outside touch, he should be given more time to improve.

If Rondae Hollis-Jefferson can develop a three-point shot, he is going to thrive in this offense with all the motion going on.

If RHJ can develop a decent touch from three-point range, then he should hold the longest tenured title Net for years come. This would allow him to, in turn, be an even better fit in Atkinson’s offense. This is contingent upon him improving in one other area; cutting down on turnovers.

Rondae Hollis-Jefferson averaged 1.5 turnovers a contest, and 2.4 turnovers per 36 minutes last season. In looking at Brooklyn’s glut of guards and wings, a majority can handle the ball for short spells, at the very minimum. This may be part of the reason why Atkinson opted to go with a small ball starting lineup by playing RHJ at the four. However, if Hollis-Jefferson ever aspires to become a more versatile player, then improving his ball handling is a necessity.

To put his subpar turnover numbers in perspective, RHJ’s per 36 minute turnover stat was similar to some starting point guards’. Kemba Walker, (2.2) Derrick Rose (2.5) and Damian Lillard (2.6) all surprisingly had comparable turnover rates to Hollis-Jefferson, who was rarely a playmaker on offense. He must become a more polished play maker in order to fit in with the Nets’ system. This would also make him more playable in tight games even if he never develops an efficient outside jumper.

There is perhaps no harder to future of any Net to predict than that of Rondae Hollis-Jefferson’s. His extremely friendly rookie scale contract for the next two seasons certainly makes him an asset. He is due less than five million over the next two seasons on a 23rd pick scale despite producing more than some lottery picks from the 2015 draft class. Of course, RHJ’s glaring deficiencies will lower his trade value, which makes it difficult to analyze his market.

In a league where having a top 10 defense ensures relevance, it’s entirely possible that a playoff bound team could prioritize Hollis-Jeffersons’ services at the deadline. Tom Thibodeau would no doubt value his tenacity and ability to fill an open wing spot. Perhaps a team like Pelicans who need to deal some large salaries would attach a protected pick in a deal that would bring RHJ to New Orleans. In short; it is reasonable to believe that there is a trade market for a high-energy wing on a cheap contract such as Hollis-Jefferson.

The Nets could also go the other way, in turn emphasizing continuity now that a majority of players from the King regime have been dealt. Depending on how RHJ’s development plays out the next two years, he could prove to be a very serviceable player for the foreseeable future (even for as long as it takes for Brooklyn to return to the postseason.) After all, it may not be wise for Marks to trade a premier perimeter defender when his team ranked 23rd in defensive rating last season.

Hollis-Jefferson provides the type of happy-go-lucky attitude that is needed when a team is in the Nets’ position. He was bold enough to get a large tattoo of himself on his back; this takes an inordinate amount of confidence! When the Nets go through another rough patch (and there will be several over the next several seasons) it is refreshing to see a positive face speak optimistically to the media.

There is a case to be made for either keeping, or dealing RHJ before he is due for an extension. It would be difficult to pass up a deal that involves a first-round pick, (though this scenario would likely involve a salary dump heading the Nets’ way) or another type of future asset. Until this type of deal is offered, let’s enjoy Hollis-Jefferson’s fun loving personality, and entertaining style of hard-nosed play.