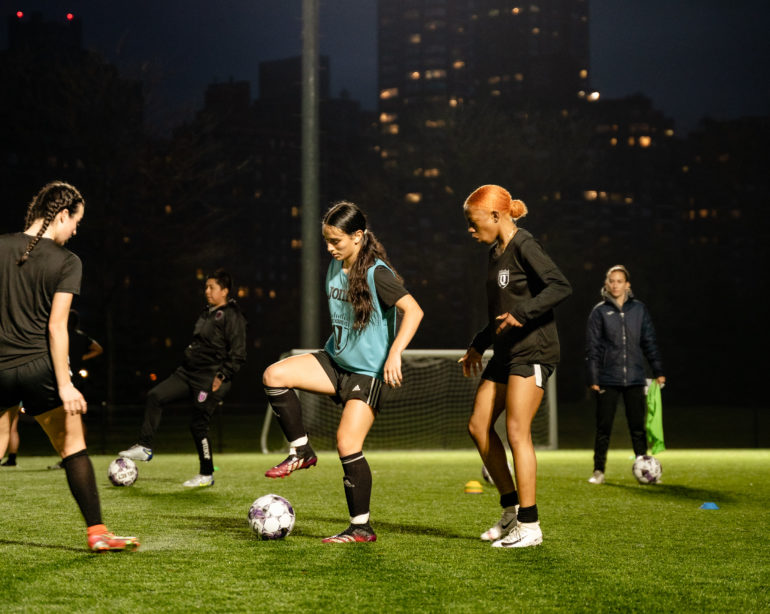 This month, the long awaited USL W League finally kicks off – and Queensboro FC is fielding one of the league’s inaugural teams. Nets Republic spoke exclusively with the club’s first three signings.

“All of us at Queensboro FC are so excited to have a team competing in the W League and ultimately be a part of the continued growth of women’s soccer,” PJ Davidson, the organization’s Vice President of Sales told Nets Republic. “To be able to provide opportunities for players to grow and continue on their pathway to pro is a huge part of what we are trying to accomplish. We look forward to finding the next superstar right here in Queens and helping them achieve their dreams of playing at the highest level.”

With the club’s home opener and first game just days away on March 25, it is time to meet some of the players, tomorrow’s stars, that will be embodying the motto of #ForeverQueens.

Brooklyn native Ambrosier Mitchell can do it all – outside back, center mid, she’s a versatile player who is ready to jump into this summer’s competition and be part of the club’s inaugural W League team.

The 21-year-old is a rising senior at St. Francis College in Brooklyn. She first heard about Queensboro FC through her friend who currently plays on the men’s academy team.

“I followed his time on the team and started following the organization as well. When they had tryouts for the W team, I was intrigued and wanted to tryout,” Mitchell recalled.

Mitchell attended the club’s first round of open tryouts in February and was shocked to receive a call from Caballero just weeks later. “I got a call from Nadia, and we talked for 20 minutes,” Mitchell recalled. “She told me I made the team, and I was pretty excited!”

Mitchell is looking forward to working with Caballero this summer and feels fortunate to work with a coach with so much playing experience in Europe.

Overall, Mitchell is determined to show the W League not only what she can do, but what Queensboro FC has to offer. “I’m most looking forward to making a name for myself,” she explained. “This is the first-ever women’s team for Queensboro FC, and I get to be part of that legacy!”

According to Caballero, selecting Mitchell at the first tryout was a no-brainer. “She has a flow to her game and can play in multiple positions,” Caballero said of Mitchell. “She knows what needs to be done on the field and can give us balance.”

Striker Jaylen Vallecillo is a 16-year-old Queens native who is ready to take the borough by storm. The high school student has played with the U17 Honduras National Team that recently competed in the CONCACAF Women’s U-17 tournament.

She attended the club’s open tryouts in February determined to make the team. For Vallecillo, getting the opportunity to play with new people and represent her borough presented an extremely meaningful opportunity.

“I was very relieved when I got the call that I made the team,” Vallecillo said. “It was an amazing experience at tryouts, and to make the team was a great feeling. It felt like an accomplishment.”

As Vallecillo prepares to compete this summer, she is excited to become a part of the Queensboro FC organization. “I’m looking forward to having good experiences with my teammates and just enjoying the moment,” she said. “I love to experience new things, and it feels extra special to be from Queens. I’m really looking forward to the season and what’s to come!”

For Caballero, Vallecillo represents the future talent that the W League is trying to foster and promote locally. “She has so much potential and talent that will be beneficial to the team,” Caballero said. “She has experience playing with Honduras and has the ability to compete. You don’t feel like she is 16 when she’s on the field.”

Defender Brittany Munson is a rising senior at James Madison University. The 21-year-old center back from Merrick, NY was recruited to Queensboro FC, and she is excited to play locally this summer.

“I want to thank Nadia so much for reaching out to me. I was so thrilled and knew I had to hop on that chance,” Munson said. “I’m excited to join, be one of the first players, get the opportunity to play with new teammates, and develop further in my own game.”

Munson says she models her playing style after U.S. Women’s National Team legend Julie Ertz, who has historically played both as a holding midfielder and defender. “She has that grit like I do. She’s not afraid to go forward or be hard with her tackles,” Munson said. “I think I have those qualities and I can see myself in her play.”

Playing at Queensboro FC this summer came as an easy decision for the Long Island native. “It can be hard to find summer leagues, especially on Long Island, so being able to play close to home is awesome,” Munson said. “Being one of the first players to join Queensboro’s W League team means a lot, and I’m excited to see what I can contribute to the team’s future success.”

Having Munson join the inaugural W League team rounded out the roster that Caballero is building. “Brittany is the player that I was looking for to solidify our defense,” Caballero said. “Her decision-making on the ball and her style of play fits perfectly with what we’re trying to do here with our system.”