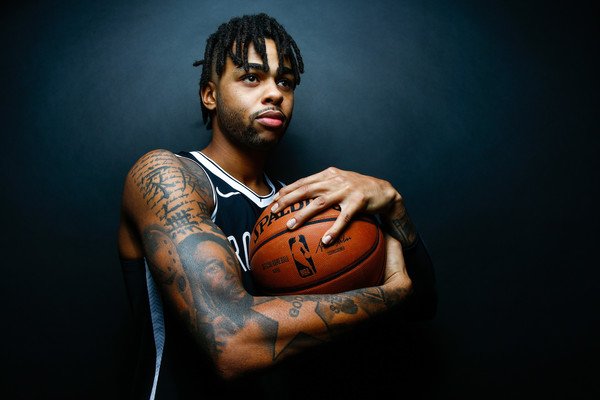 The wait for the Brooklyn Nets to begin the preseason is a little longer than it the wait for other teams to start the preseason, with Brooklyn’s first game not happening until Wednesday, so I decided to do a pre-preseason mailbag and answer your Nets-related questions.

What’s the worst draft pick you would take straight up for D’Angelo Russell? – Tony

Me, personally? Or me, pretending to be the Nets?

I think this is a complicated question because so much of the answer depends on context. Right now, with the season looming, uncertainty about Spencer Dinwiddie’s future on the team, and Russell as an important long-term piece at the point guard position? I want a lottery pick at the very least, but I also know that no team is trading a lottery pick straight up for Russell, which leads us to an impasse. The Brooklyn Nets aren’t going to be willing to give up Russell for anything less than what they consider equal value; other teams aren’t going to want to trade for a player who’ll be an RFA next Summer.

The Nets weathered the post-Celtics trade days admirably and they don’t want to emerge from that just to re-enter a rebuild. Trading Russell for a pick plunges you into uncertainty because he’s still the second-most promising young player on this roster after Jarrett Allen. I can’t see Sean Marks giving that up for a draft pick. This definitely feels like a “you have who you have” kind of thing, where the Nets basically have to value Russell highly. They got him for Brook Lopez and a late first rounder and his value has dropped since then. He’s still an enticing young player on a rookie deal, but with just a year left on that deal, no one is going to be rushing out to offer you a valuable draft pick for him.

Can the Nets be competitive for that eight seed? -Matt

This is the great debate I’ve been wavering back and forth on all offseason. Here’s where I’m currently at with an Eastern Conference playoff order:

There are the six that I’m completely sold on. I think Miami is the seven seed, but there’s uncertainty. I think Detroit gets the eight seed, but there are three teams that I could see challenging for it: Cleveland, Charlotte, and Brooklyn.

Honestly, I like Brooklyn’s chances less than the others, but I think the Brooklyn Nets have one big advantage over Cleveland and Charlotte, which is that they don’t have that one-star player they’re relying on. Kevin Love or Kemba Walker dealing with injuries or getting dealt end that team’s hopes. Brooklyn can likely weather an injury. A team built like the Nets can’t win a title, but the roster construction can help make them competitive for the eighth seed in the East!

The other side of the coin is “should the Brooklyn Nets try to be competitive for the eight seed,” which I think…yes? The new, flatter lottery odds make tanking a less viable strategy and Brooklyn wants to be good enough that a marquee free agent looks at them and decides he wants to sign there. Tanking doesn’t accomplish that. At this point, cap space and being knocked out in the first round of the playoffs gives you a better chance at being competitive for a top seed in the future than running a tank does.

What are Brooklyn’s chances in the free agent market next year? -Dale

This upcoming Summer feels like a turning point for Brooklyn. The current core has a lot of good, young players, none of whom top out at the “best player on a championship team” level. I’m not sure anyone outside of Jarrett Allen even has “second-best player on a championship team” potential, so using that cap space to bring in a pair of max free agents would be a great path to contention!

Now, it’s obviously not that simple. I’m not a cap guy, but this piece by Phil Watson at Nothing But Nets breaks down how the math to get to those two max slots is difficult. One of the key things, if they want to create those spaces, is dealing with Allen Crabbe’s player option; if he’s on the roster when free agency starts next year, Brooklyn is unlikely to be able to make the space savings work. You won’t end up with the Jimmy Butler/Kyrie Irving dream scenario.

I’m sure there will be more to say about this as next year’s free agency approaches, but for now, I’m worried but optimistic about the Brooklyn Nets being players in free agency. A major market team with cap space that is not owned by James Dolan is something that should get some meetings.

What do you think about Caris LeVert this year? -Chad

In addition to wanting to know my thoughts on LeVert, my buddy Chad — who went to Michigan — wanted to know if Caris LeVert and R&B singer Gerald Levert were related because, despite the different capitalization, that last name can’t be too common, right?

Turns out that Gerald Levert’s dad is the third cousin of Caris LeVert, so that’s cool!

Anyway, the other, more pressing part of this question:

I love LeVert’s potential and I’m curious to see if he takes a big step forward this year.

Kenny Atkinson has said that LeVert is going to see an increase in ball-handling responsibilities this year, which is interesting since point guard is a spot the team has a lot of. But Atkinson says LeVert doesn’t necessarily have to play the point to have the ball in his hands.

It’s worth noting that among players who played 1000 minutes for the Brooklyn Nets last year, LeVert had the worst offensive-player impact plus/minus. The idea that LeVert takes a huge step forward this year sounds great in theory and feels more and more likely as Atkinson and other Nets players heap praise on LeVert, but it’s not a guarantee. LeVert was negative when he was on the court last year. I don’t think he will be again, but I also don’t want to get my hopes up too much.