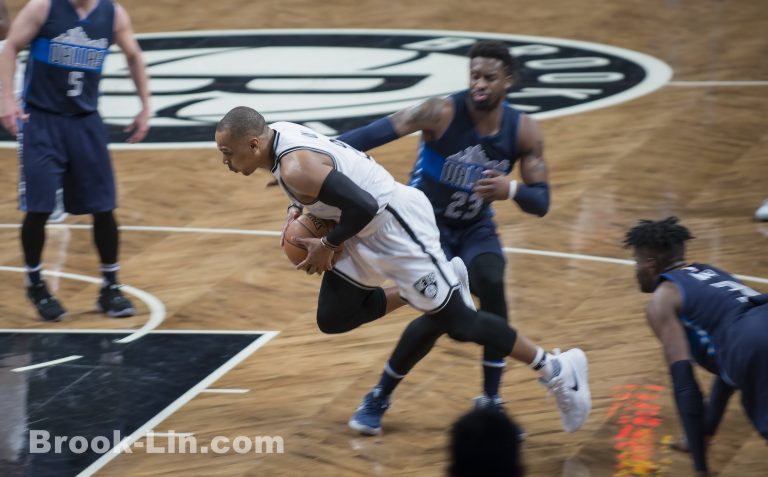 On July 15, it was announced that the Nets signed Randy Foye on a veteran’s minimum, one-year deal. This will be Foye’s seventh NBA club in his twelve seasons in the league. For the Nets, this is another value contract. This team can use some reliable bench presence and additional salary cap flexibility. As for Foye, he will be looking to rediscover his outside shooting touch after converting a mere 30.9% three-pointers in his stints with the Nuggets and the Thunder last season. He has demonstrated he’s capable of much more, having finished in the top 10 in the NBA in three-pointers made for three consecutive seasons.

Following his excellent senior season with the Villanova Wildcats, Foye was considered an exciting prospect coming out of college. He was drafted 7th overall in the 2006 draft and started off his rookie season with the Minnesota Timberwolves. Though the Timberwolves had a glut of guards on their roster, Foye played well whenever he came off the bench. By the end of his rookie season, he had managed to carve out a permanent spot in the rotation. As one of the most consistent rookies that year, he was selected to the All-Rookie First Team. The following two seasons with the Timberwolves saw his playing time increase even further. In his third year with the club, Foye averaged 16.3 points, 4.3 assists and 3.1 rebounds per game.

Foye continued to come off the bench during his subsequent stints with the Washington Wizards and the Los Angeles Clippers. It wasn’t until the 2012-13 season with the Utah Jazz that he got the chance to be a regular starter again. He settled in well, averaging 10.8 PPG, 2.0 APG and 1.5 RPG while shooting 41% from the three-point line. His 178 threes were enough to break the franchise record for 3-points made in a single season. Shortly after getting traded to the Denver Nuggets the following season, he was again relegated to coming off the bench.

Throughout his career, Randy Foye has been a reliable combo guard, capable of taking over games if his shots are going in. His silky-smooth jumper has always been his main calling card, and his field percentages were usually satisfying enough. He has some strong hesitation moves and is capable of finding the open man when the situation calls for it. If he is playing the facilitator, his size and strength help him overpower opposing point guards. He hasn’t been asked to create for his teammates too often since his Minnesota Timberwolves days, but his short stint with the Oklahoma City Thunder clearly shows he’s still got what it takes to be a solid backup point guard. He is a decent ball-handler and plays with enough hustle not to be a drawback on the defensive end.

While he is a great shooter, Foye has never really developed some other aspects of his offensive game. He’s not very explosive off the dribble and is a poor finisher at the rim, which makes him rely on his jumper a lot more than he’d probably like. Due to these factors limiting his game, he has rarely been a truly efficient offensive option. He is also an average athlete who can have a hard time sticking with athletic guards without resorting to hand-checks. While he’s far from a selfish player, he can over-dribble in traffic sometimes.

In the Brooklyn Nets, Foye will probably be utilized as the main “instant offense” guy off the bench. His experience and capability of playing at both guard positions should see Foye become an important part of this roster, especially early on in the season. Considering that the Nets have a lot of combo guards at this moment, it remains to be seen just how big Foye’s role will be. He will also probably serve as a mentor to some of the younger guards like Caris LeVert or Isaiah Whitehead. He has been a consummate professional throughout his career, which is a nice quality to have in the locker room.

At first glance, this one-year deal might imply that the Nets see Randy Foye as yet another stopgap to get them over the salary cap floor this season. However, there is probably more to it than that. In addition to still being a solid NBA player, Foye can also teach the young Nets guards a thing or two about life in the NBA. Veteran leadership is an often under-appreciated quality in this league, and Foye can provide it in spades.