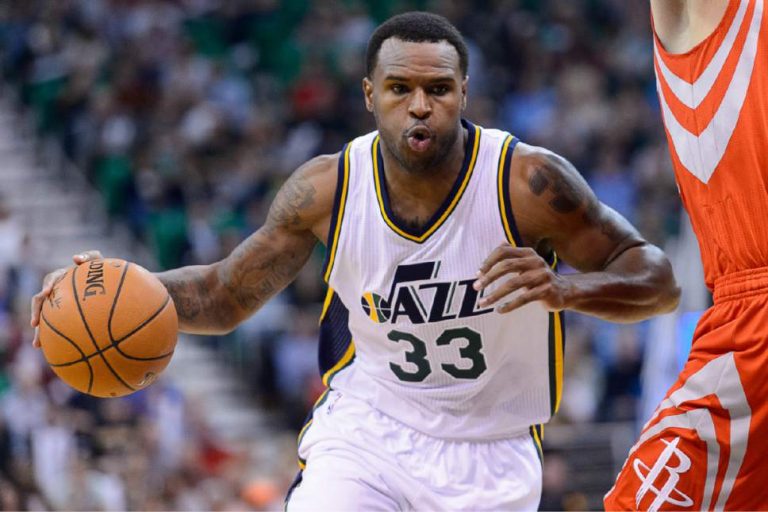 When the free agency period started, Trevor Booker was one of the first players the Brooklyn Nets contacted. The 28-year-old, 6-foot-8 power forward has signed a 2-year, $18 million deal with a guaranteed second year. The Nets were in need of an athletic defensive enforcer, and Booker fits that bill very nicely. Before signing with the Nets, Booker had played his first four NBA seasons with the Washington Wizards, and two more with the Utah Jazz. In both his former teams, Booker gradually became a fan favorite due to his constant hustle and take-no-prisoners basketball style.

Trevor Booker got into basketball at a young age, after his mother showed him the clippings from her high school playing days. As a sought-after high school recruit, Booker opted to join the University of Clemson. During his four years, he led the Clemson Tigers to three consecutive NCAA appearances for the second time in history. In his senior year, he averaged 15.2 points, 8.4 rebounds, 2.5 assists, 1.4 blocks and 1.3 steals per game. For his accomplishments, he was selected to the All-ACC First Team. He was then picked 23rd overall in the 2010 NBA draft by the Minnesota Timberwolves, but was promptly traded to the Washington Wizards on draft night.

During his time in Washington, Booker was mostly utilized as an energy guy from the bench. The lockout-shortened 2011-12 season was also Booker’s best with the Wizards; he averaged 8.4 points and 6.5 rebounds per game. As a free agent, he signed with the Utah Jazz during the 2014 off-season. On April 11, 2015, he broke his career point record by scoring 36 in a victory over the Portland Trail Blazers. He only started in 7 out of 158 games played during his two-year stint in Utah, which was probably one of the biggest reasons he moved on and accepted the Nets offer.

Booker has definitely shown enough promise to become a legit starter in the league. His per-36 numbers are quite solid: 11.5 PPG and 9.2 RPG, while shooting an excellent .515 from the field. His most obvious quality is that he is a hard worker who hustles hard for every single possession. He is a good man-to-man defender against most match ups at power forward in the league. He is capable of switching and guarding most players from the 2 to 4 positions, while also being able to contest some of the faster point guards or the bigger centers.

On offense, most of his points should come in transition or from put-back baskets. He is an excellent rebounder, and his relentless work rate allows him to clean up his teammates’ misses effectively. His athleticism and basketball IQ are both at a high level. By all accounts, he is an outstanding leader on and off the court.

He has shown flashes of being a good slasher and pick-and-roll big man, but he still needs to work on those aspects of his game. He has a decent stroke, but his shooting range is not as long as he would like. He worked on his 3-point shooting while at the Jazz, but only made 29.3% of those shots last season. He is somewhat undersized for a power forward, relying on his hustle to hold his own against bigger opponents.

It remains to be seen whether Booker will actually start the 2016-17 season as the Nets’ starting power forward. Kenny Atkinson has claimed the starting spot will go to the best man for the job, but it’s hard to imagine Booker doesn’t have an advantage over Anthony Bennett, Chris McCullough and Luis Scola, at least early on in the season. As an NBA veteran in his prime, Booker does seem like a natural fit to make that spot his own. Still, it’s far from a sure thing, and the season is long enough for all kinds of new developments.

With his two-year contract, Booker seems like another good stopgap until GM Sean Marks figures out the best way to utilize all that cap space the Nets have available. Still, by the time 2018 rolls around, the Nets might be looking at ways to try to extend him. Trevor Booker has never been a starter in the NBA, and his versatile skill set is quite promising. Add an impeccable work ethic, and you have the makings of a very interesting player. However, most of Booker’s further development hinges on improving his outside shooting. If he can reach the league average percentages, the Nets might have a hard time keeping him.